Bitok hopes the tournament will unearth more gems who will follow the same path as the aforementioned and is rubbing his hands with glee at the prospect. 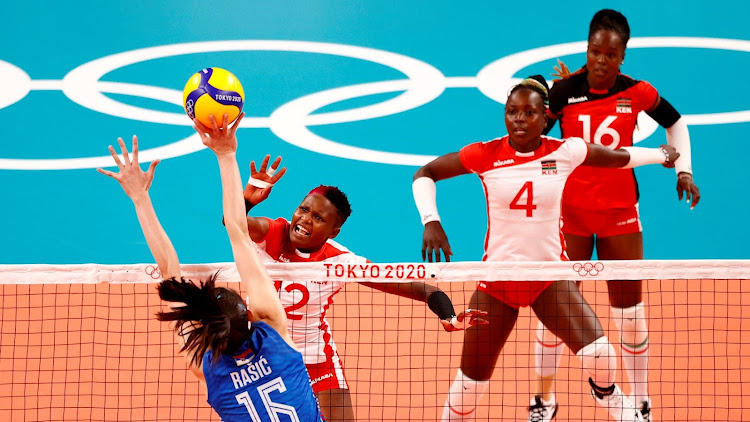 Gladys Ekaru of Kenya in action with Milena Rasic of Serbia.
Image: REUTERS

Fireworks are expected at Koitalel University College, Nandi County this  weekend when the giants of secondary schools volleyball battle at the Heroes Community Volleyball tournament.

The tournament's patron, Paul Bitok, revealed 2019 national champions Kwathanze Secondary School and former champions Cheptil and Lugulu Girls are among at least 10 teams that have confirmed participation in  the inaugural tourney.

The Machakos-based school is a household name in volleyball circles after dominating both national and East Africa school games under the guidance of the no-nonsense and keen-to-detail coach Justine Kigwari in the past seven years.

Bitok said it offers the best platform for volleyballers to showcase their talents.

"We are sure to witness thorough competition because of the superior number of schools taking part in this competition," Bitok, also head coach of the national women's volleyball team, said.

Cheptil and Lugulu will look to make the most of the tournament as part of their preparations for the school games during which they hope to dislodge Kwathanze from the throne of Kenya's volleyball queens at the schools level.

Bitok hopes the tournament will unearth more gems who will follow the same path as the aforementioned and is rubbing his hands with glee at the prospect.

"It's our aim to nurture talent and this avenue is the best to tap the pool of talent endowed in the country. Under the right environment, some of these athletes can end up ruling the world," he said.

With the transfer window now open, impressive players who will catch the eyes of coaches could end up finding new homes.

The General Service Unit, Equity, Kenya Pipeline, Western Prisons and Rift Valley Prisons are among clubs that will take part in the two-day event.

The tourney will also include institutional clubs, such as Kakamega County, Uasin Gishu, Kenyatta and Strathmore Universities  as well as self-supporting teams, such as Mlango Eldoret and Tendwet.