However, there is little to write home about the men's team save for a third-place finish in the Cup of Nations more than a decade ago.

• 'Wafalme' have never gone beyond the African Cup of Nations — a competition that has been dominated by North African countries of Egypt and Morocco, with Cameroon coming in between.

• Tarus, 45, was brought on board in August to stem this tide, even though he admits it will not be a walk in the park. 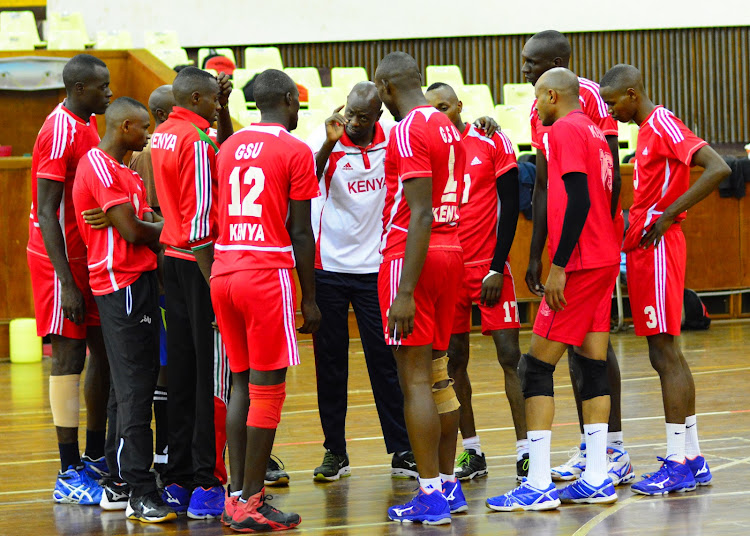 When Malkia Strikers qualified and eventually participated at the 2020 Tokyo Olympic Games, questions were raised on why the men's team 'Wafalme' have perenially failed to sparkle at the top level.

Malkia Strikers have won the Africa Championships nine times, have been to the World Championships, World Cup and the FIVB Grand Prix series in addition to two Olympic Games appearances (Athens 2004 and Tokyo 2020).

However, there is little to write home about the men's team save for a third-place finish in the Cup of Nations more than a decade ago.

These dwindling fortunes have continued to raise eyebrows with choruses of neglect furthered by the various stakeholders year-in-year-out. 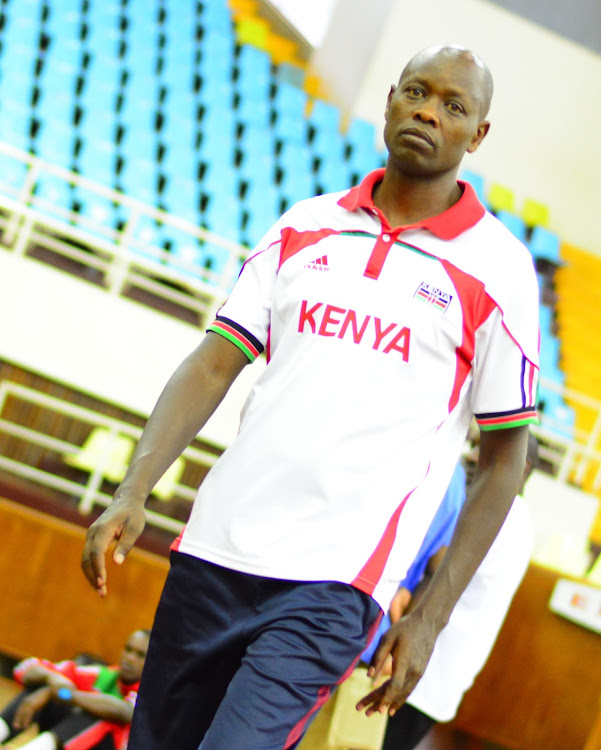 'Wafalme' have never gone beyond the African Cup of Nations — a competition that has been dominated by North African countries of Egypt and Morocco, with Cameroon coming in between. The lack of history in the men's game is worrying.

In as much as there are many challenges associated with the team, national team coach Gideon Tarus says they are slowly finding their footing, banking on the current team he feels is talented than any other before them.

Tarus says inadequate preparations due to lack of financial and material support has been the team's main Achilles heel for decades.

Poor preparations, he added, denies the players the much-needed endurance and mental toughness to see off matches and tournaments as opponents are able to quickly read their game.

Recently, he revealed, the team trained for only five days on their way to the Africa Nations Championships where they finished ninth despite an early promise when they beat heavyweights Egypt 3-2, the first time ever, in their opening match.

Lack of basics has, Tarus says, also been a major problem.  This, he says, is because indoor facilities hardly come by in the country and thus the huge challenge of transiting from outdoor to indoor situations during tournaments. 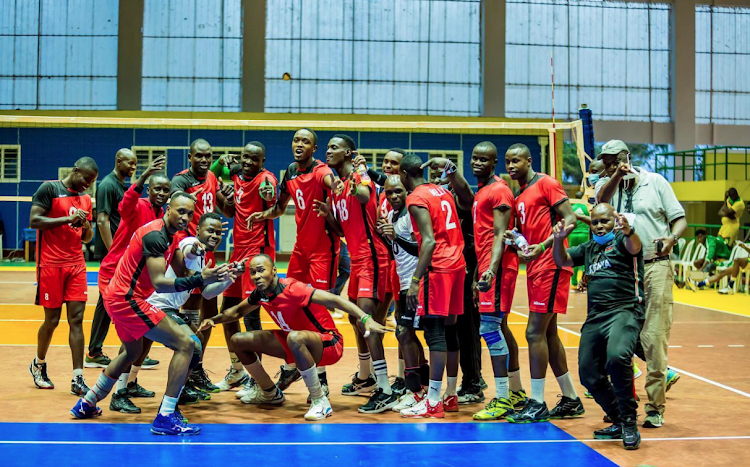 "Basics are our main concern. Our ball handling, reception and blocking need to be inch-perfect. If you compare us with North African teams, we have power and pace but technically we are poor. Players lack the perseverance to go the full distance and teams have taken advantage of this," says Tarus.

Tarus, 45, was brought on board in August to stem this tide, even though he admits it will not be a walk in the park.

The General Service Unit GSU coach brings a winning mentality and much-needed experience from his trophy-laden coaching career, though locally.

Tarus has won 16 national titles with the paramilitary side and was lucky to lay his hands on the coveted African Club Championship gong in 2018.

"The men's game has improved because we now have players better than never before," he says.

"They are relatively younger and more hungry for success. Some played for the national team for the first time at a continental event while in Rwanda and they showed great maturity, which signifies a step in the right direction." 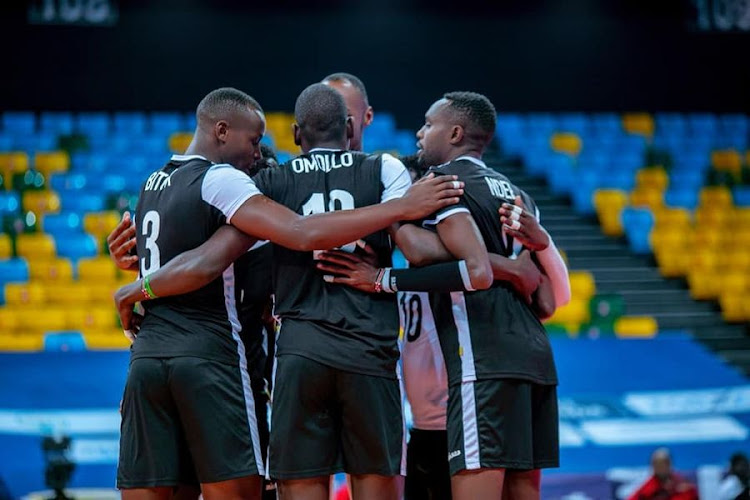 Tarus says he has witnessed fearlessness and a tough mentality in the current squad which serves to inspire confidence—something he says was missing previously when he was part of the technical bench.

He bemoans that players used to suffer from an inferiority complex that saw them lose matches even before they stepped into the court.

"There's more determination and players want to bring the fear factor to the team. I didn't see the Egypt win coming considering we were underdogs but the players went toe-to-toe with their more fancied opposition and got a reward," he says.

"We trained for less than a week without a serious friendly match before heading to Rwanda but the performance there was an eye-opener. Players have moved on from the notion that they cannot compete with the best in Africa."

He continued: "If we achieved that in five days, how much can we if we train for a month or so prior to major tournaments? We need enough time to train to allow  players to adapt to playing formation, create rhythm of play as well as a winning formula."

In 2017, Kenya's average age at AFCON was 32 but despite all that experience, they were dismantled by their rivals and it was down to the fragile mentality, Tarus observes.

He feels time is ripe for all stakeholders in the country to accord the men's team all the support they need for them to be talked of in the same breath with Malkia Strikers. 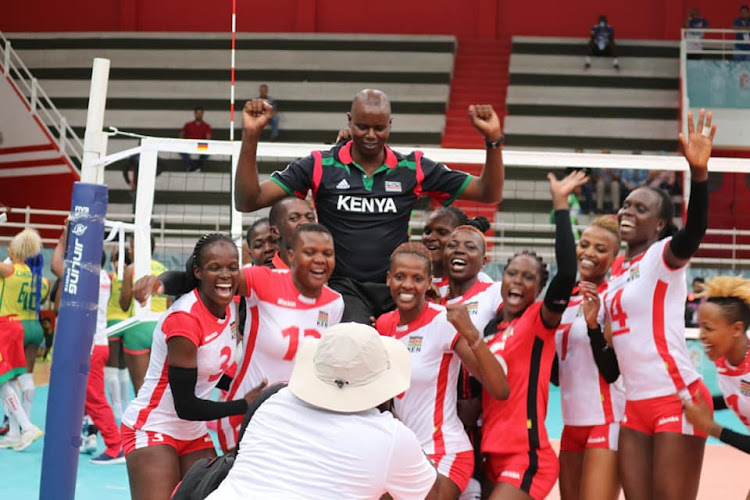 His rallying call has been echoed by his Malkia Strikers' counterpart, Paul Bitok, a former international who, unfortunately, has nothing to show for his numerous caps.

For the growth of the men's game, he says, both Malkia and Wafalme must be treated equally and it will be great to see that sibling rivalry thrive when each team seeks to thrive at the top level.

"It was good to see Tarus trust youngsters for the big assignment in Rwanda and I was happy to see them beat Egypt, something that had never happened before," says Bitok.

"Any team can perform to their strength in the right environment. If the federation can orgainse for international friendly matches, it will be great since the players will get some experience under their belt."

KVF vice chairman Charles Nyaberi says the revival and revitalisation committee is burning the midnight oil to ensure Wafalme match up to the women's team.

He says KVF will create more opportunities for individual players to horn their skills overseas. Abiud Chirchir, Mike Chemos and Enock Mogeni are the only Kenyan players to have professional volleyball abroad in the recent past. 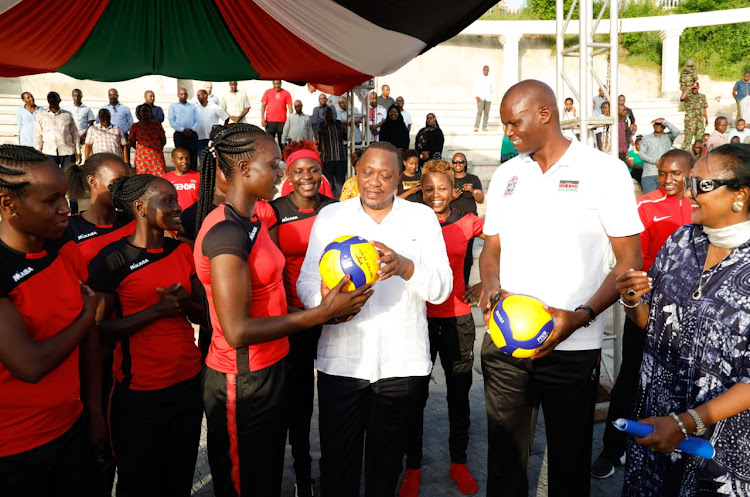 "We would like to expose most of our players to further their game and thus perform with distinction once they are called for national duties," he said.

"Interestingly, the men's game has not gone down the drain as perceived. We are working on having sponsors on board to bankroll our activities."

And even as they work on the senior team, Nyaberi observes that the basics must be taught somewhere else, age group teams.

"The federation is closely working with schools and universities to tap the talent. We want to have distinguished age group teams that will allow for a seamless transition of players from one level to the next," he said.

Nyaberi quickly moved to dispel the notion that Malkia Strikers receive favour's from the federation.

"However, our emphasis is that both groups have the capacity to perform better at the highest level with material, moral  and financial support."