Obiri once again trails Burundi's Niyonsaba in 5,000m in Zurich

Niyonsaba, is 800 metres silver medallist at the 2016 Olympics

•Niyonsaba, 800 metres silver medallist at the 2016 Olympics, is banned from her preferred distance because of naturally high levels of testosterone. 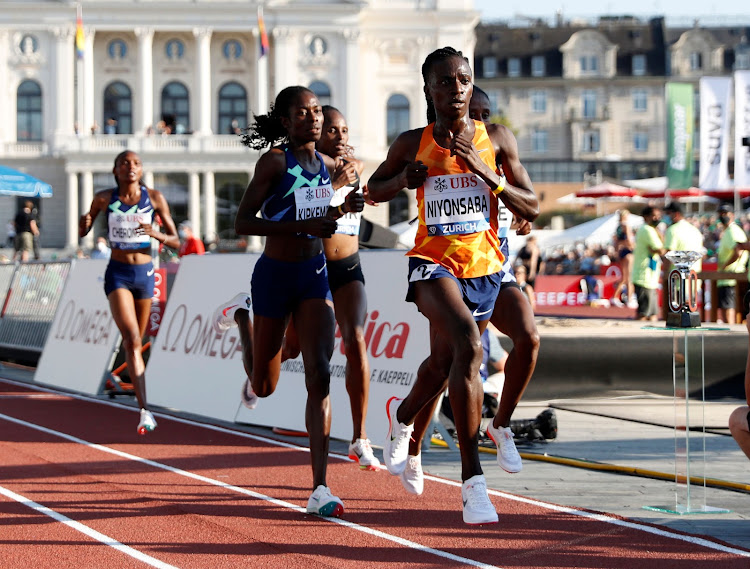 Burundi's Francine Niyonsaba in action during the 5000m in Zurich
Image: REUTERS

Francine Niyonsaba of Burundi finished a frustrating season on a high with another impressive victory over 5,000 metres on a temporary city-centre track in the opening session of the two-day Diamond League final on Wednesday.

For the third time in two weeks Niyonsaba outkicked Kenya's Tokyo Olympics silver medallist Hellen Obiri to take the honours on a curtain-raiser evening before Thursday's main event that features a galaxy of stars.

Niyonsaba, 800 metres silver medallist at the 2016 Olympics, is banned from her preferred distance because of naturally high levels of testosterone. She moved up to 5,000m at the Tokyo Games, only to be disqualified for a lane infringement in her heat.

She spoke this week of the lack of support she had received in stepping up to the longer distance, but, just as in Brussels last week and over 3,000m in Paris, she had too much speed for Obiri.

"I love challenges. I have a lot of resilience and determination," Niyonsaba said. "I stayed behind most of the race, this was my tactic. I am still learning after switching from 800m."

Her time of 14 minutes 28.98 seconds will not be recognised as official because the race was run on a temporary, four-laned 560 metre, banked track in the city centre.

"It was a new experience, we did not know where we can start to kick and accelerate," Obiri said.

The track also caused confusion in the men's race, as a large gantry placed 25 metres beyond the barely-noticeable finishing line, left the leaders hammering on far after the clock was stopped.

It did not effect the result, however, as Ethiopia's 20-year-old Berihu Aregawi finished strongly to win in an unofficial personal best of 12:58.65. Birhanu Balew of Bahrain just pipped Kenyan Jacob Drop for second.

Tokyo Olympic champion Mariya Lasitskene of Russia took the women's high jump, her 2.05 metre leap being the best by anyone this year.

Sweden's Thobias Montler won the long jump with a final round leap of 8.17 metres and Serbia's Ivana Spanovic was victorious in the women's event with 6.96.

After the relatively low-key proceedings on Wednesday, the action will be of a different magnitude when it switches to the city's Letzigrund stadium for the main night of the "Weltklasse" meeting in front of 20,000 fans on Thursday.

There will be finals in 25 events, with the men's and women's 100 metres top of the bill.

Each Diamond League winner will collect $30,000 - half the prize in 2019 - and automatic entry into next year's world championships in Eugene in the United States.