I feel no pressure, declare Ekaru ahead of Tokyo debut

The 21-year old who plies trade with six-time African Club Champions Kenya Pipeline, is the youngest player in the Paul Bitok led Malkia

• I have trained adequately, my mind and body fully tuned on the task ahead-Ekaru 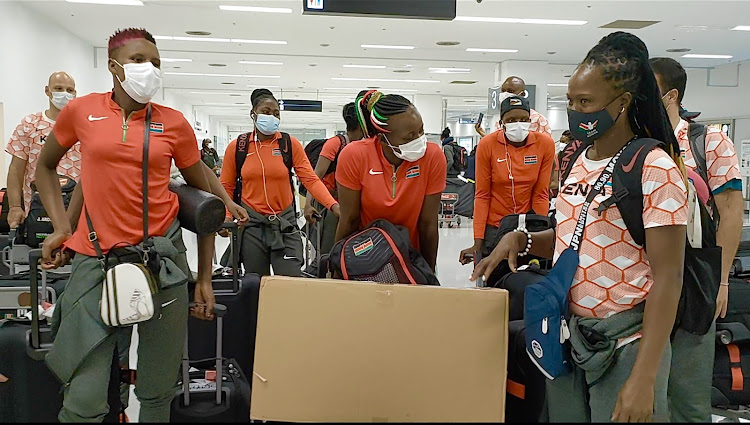 Malkia Strikers after arriving in Tokyo from Kurume Training Camp

Unlike other juniors who feel the pressure to perform at the highest level, Malkia Strikers middle blocker Gladys Ekaru is in buoyant mood as she prepares to make Olympic Games debut in Tokyo.

The 21-year-old who plies trade with six-time African Club Champions Kenya Pipeline,  is the youngest player in the Paul Bitok -led Malkia squad— but she is ready to help the Kenyan Queens go deep in the competition.

"I have no pressure at all because I have chosen to carry the Kenyan flag and will do so passionately. Being in the team and donning the Kenyan colours in Tokyo at this tender age is a result of hard-work and commitment. It is also a lifetime chance and I want to back this up by being on the court. I am ready to start the games or come off the bench-depending on the coaches' decision," Ekiru boldly explains.

"I have trained adequately, my mind and body fully tuned on the task ahead. Nothing can derail me from achieving my dreams. Hopefully we can have a good tournament."

Ekaru hopes playing in the delayed Games will open doors for her dream move to either Brazil or the United States.

Ekaru-winner of both national and East Africa School Games titles with Kwanthanze in 2017 and 2018, believes she's ready to step out for greener pastures outside Africa.

Detailing her preference for the aforementioned nations she said:"Brazil and USA have always been my dream destinations in volleyball. Brazil,  because of their standard facilities and quality performance. It was a worthwhile experience working with the high performance Brazilian coaches and I would want to experiment that there as well."

"My love for USA dates back to when I was in high school. I understand they offer scholarships and that really inspired me."

Ekaru will be a regular player for both club and country going forward if she remains hard at work.

Her advice to other upcoming athletes is to remain disciplined and work harder in training  because talent alone is not enough.