Kenya wary of South Africa ahead of Junior Africa show

• "South Africa play intensively from the start and are impressive and assured with their play," —Ludiali.

•Ludiali, formerly of Maseno school, was part of Kenya team that took part in Youth Olympics in Buenos, Argentina in 2018 and now plays for Western Jaguars. 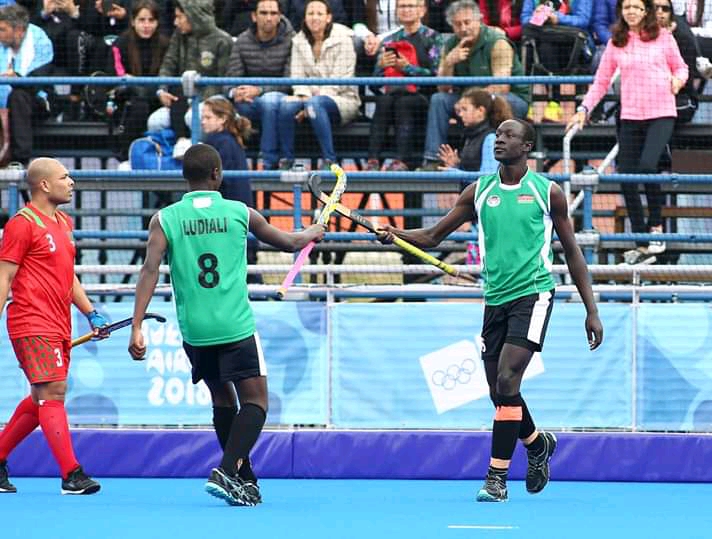 Ian Olando celebrates with Ivan Ludiali in a past Youth Olympics in Buenos, Argentina.
Image: /COURTESY

Kenya Under-21 hockey team is worried of South Africa's threat ahead of the Junior Africa Cup scheduled for next month.

Team captain Ivan Ludiali revealed that South Africa is a high pressing team and Kenya will need to play a fast-paced game not only to to match them but also to book a slot for the Junior World Cup in December.

"South Africa play intensively from the start and are impressive and assured with their play. We also need to be vigorous both in training and competition if we are to counter them. It is an open competition with all teams having equal chances," he said.

"We have watched their videos and they have been faultless in the test series against their senior Tokyo-bound team. They know how to close down the opponent and are quick in transition."

The week-long junior event is scheduled for August 14-22 in Namibia. The tournament was initially planned  for April but was pushed back owing to the spike in the coronavirus pandemic.

Ludiali, formerly of Maseno school, was part of Kenya team that took part in Youth Olympics in Buenos, Argentina in 2018 and now plays for Western Jaguars.

He observed that players need to be physically fit and mentally prepared for the daunting task ahead. He said Kenya is likely to make an impact in the event if intensity and fitness will be kept at optimum.

"The event is around the corner and a lot of running is needed for the sake of endurance. Please do not forget we have had no action for more than a year. There's need to ensure our bodies are match ready and injury-free," he said.

The matches will be played at Davin Trustco Hockey Stadium and Trustco Aloe Park.