The foreigners believe Safari is on another level compared to the 12-round championship, which they are used to.

•After the completion of reconnaissance and scrutineering on Tuesday, the team drivers have now shifted focus to the 5.5km stretch shakedown starting today at Ntulele.

•Shakedown gives drivers an opportunity to test their machines prior to competition proper while also providing media opportunity to film the action for the first time. 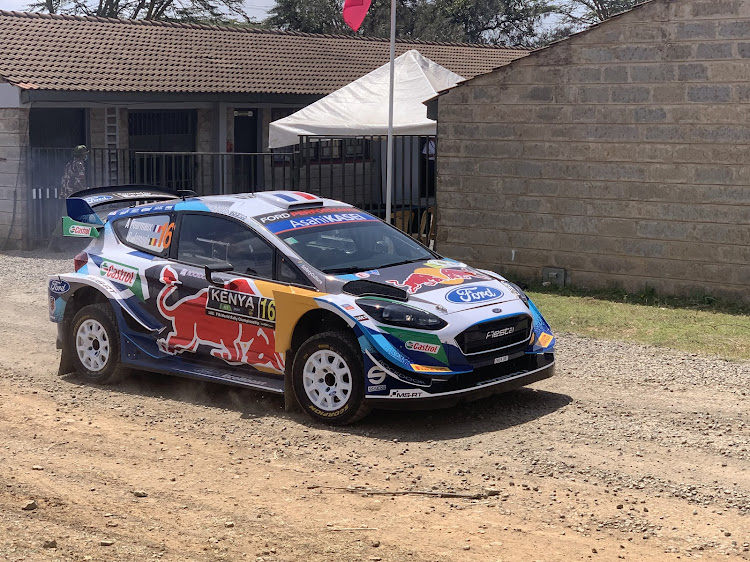 M-Sport Ford World Rally Team Car No. 16 of Adrien Fourmaux (France) and Renaud Jamoul (Belgium) during the Tuesday's reconnaissance and scrutineering in Naivasha
Image: HAND OUT

World Rally Championship teams have described Safari Rally Kenya as unique and are contemplating changing tact when the event rolls off on Thursday.

After the completion of reconnaissance and scrutineering on Tuesday, the drivers have now shifted focus to the 5.5km stretch shakedown on Wednesday at Ntulele.

Shakedown gives drivers an opportunity to test their machines prior to competition proper while also providing media opportunity to film the action for the first time.

Only the top WRC drivers and selected local drivers will participate in the shakedown.

The foreign drivers believe Safari is on another level compared to the  12-round championship they are used to.

Each round of the WRC has offered the teams something very different in terms of surface conditions.

Rally Sweden is the series’ all-snow event while Safari retains its reputation as the world’s toughest rally with rocky stretches, forcing teams to be extra cautious as they navigate such areas.

But experts believe the surface in Kenya will be a different ball game altogether especially for the foreign drivers and are, therefore, not ruling out surprises.

Miguel Fonseca, who is the WRC Promoter Media consultant, said the route is completely different and will definitely be a navigators’ event.

“It’s great to see the gravel stages in Kenya. It’s something that current drivers are not used to and will be in for surprises,” said Miguel.

“I have never been to Africa before and I must say I am really excited. The route in Kenya is quite different from what we are used to in other rounds. This means we will have to do things differently,” Ogier said.

Ford M-Sport star Adrien Fourmaux has spoken of the pride he will take from wearing the same colours in this week’s Safari Rally as the last WRC winner in Africa – Colin McRae.

“It’s really nice to know the last driver to win the Safari in the WRC was Colin McRae in the M-Sport Focus,” Fourmaux was quoted as saying on wrc.com.

McRae won the 2002 Safari in a Ford Focus developed and built by the British M-Sport squad. The late McRae beat Harri Rovanpera to the second spot in 2002. Fourmaux makes only his third top-level appearance for the team on the Safari’s return to the WRC after a 19-year absence.

“It will be really difficult to post exactly the same result although you never know because a lot of things can happen. But I want to stay quite humble. It’s an honour for me to do this rally and I can only say thanks to M-Sport for this opportunity.”

Meanwhile, drivers will proceed to Nairobi on Wednesday after shakedown to prepare for the ceremonial start at the Kenyatta International Conference Centre on Thursday.

This will be followed by the Super Special Stage at Moi Stadium, Kasarani. The teams had an opportunity to warm their engine and tyres around the KWS Training Institute.