Prisons booked their ticket after finishing second in pool A with 10 points and have their work cut out against an unbeaten Carthage side who beat Pipeline to topple pool B.

•Kenya Prisons coach David Lunga'ho says the team have been working on speedwork, blocking and reception to deal with the threat of Tunisian giants Carthage

• Lunga'ho believes the wardresses will have to be aggressive from the get-go when they come up against the Tunisians. 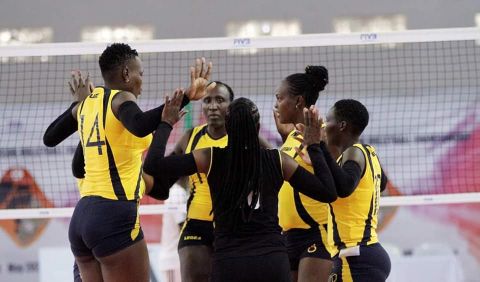 David Lung'aho's charges watched as Carthage, the 2017 continental champions, demolished Prisons' arch-rivals Kenya Pipeline in a Pool 'B' tie and would not want to suffer the same fate.

Lung'aho has identified speed, block and reception as areas of interest if they are to counter their swift North African opponents.

"Our speed was wanting but we have continually worked on it. Our steady and improving blocking system leaves us optimistic that we can get a result. We are not yet in the final but so far so good," said Lung'aho.

"I only came in to assist after coach Josp Barasa remained with Malkia Strikers and we have managed to do so much in a short period. We are prepared to go all the way."

The five-time Africa Nations Cup winner with Malkia Strikers urged his charges to take the game to the Tunisians from the first whistle.

"It is a tough match but we are up to the task. We've come a long way and we have nothing to fear. We have been taking one match at a time so it's time for Carthage. We will handle them the way they come and I urge the team to fire from all cylinders from the start," Lung'aho stated.

After rotating his squad in pool matches, Lung'aho vowed to start his best team. To neutralise the threat posed by the Tunisian attackers, the 2015 World Grand Prix Group 3 winner with the national team looks to utilise the height of his players in the middle blocking department.

"Brackcides Agala and Lydia Maiyo are integral to the team and will start after coming off the bench against Wolaita Sodo," he said.

Prisons booked their ticket after finishing second in Pool A with 10 points. CS Sfaxien, also from Tunisia, face Custom Services of Nigeria in the other semi-final.