How coaches are using technology to help youngsters realise their dreams

Three local coaches from three football academies in the sprawling slums narrate their journey in coaching, dreams to forge world class players from the ghetto and how technology is aiding their education.

•Fred Odhiambo, Alex Mwangi and Anne Musyoka are among coaches who have embraced digital technologies to develop their coaching skills and knowledge 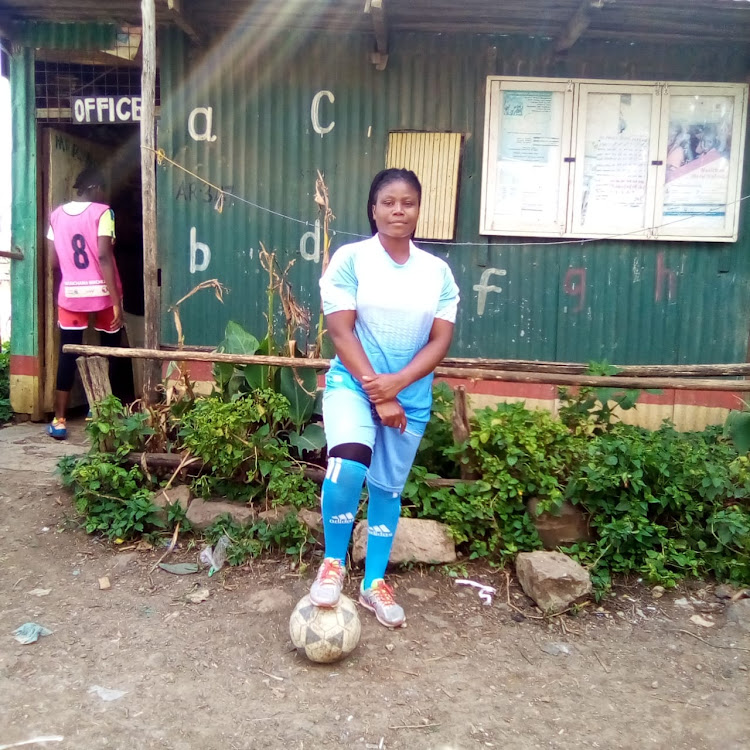 Anne Musyoka poses after one of her training sessions
Image: COURTESY

Fred Odhiambo thought his world had fallen apart when he suffered a road accident six years ago while going home after a training session with Buru Buru Sports, his club at the time.

A serious right arm injury kept the midfielder on the sidelines for a while before he could resume life on the pitch.

Even when he did, the former Kisumu Telecom player could not recover the form that had seen him enjoy a 14-year illustrious career with various clubs.

Though a heartbreaking move, Odhiambo decided to hang his boots at the tender football age of 26 in what would later turn to be a blessing in disguise.

Odhiambo's testimony is of a phoenix that rose from the ashes — from watching his playing career end prematurely to polishing young footballers from the slums around the capital into fine gems who can compete at the highest level.

Known to his admirers as ‘Abedi’, Odhiambo is the head coach at Kariobangi South Academy, which comprises approximately 100 young footballers aged 5-16 years.

“My motivation for establishing this academy was purely out of the passion I have for football. After the injury, I could never recover my form and so I started attending short-term coaching courses. My vision for this academy is to make it a talent factory, exporting the best players to the professional leagues,” Odhiambo said.

Over at Mombasa Road in Mukuru Kwa Reuben, Anne Musyoka, 36, is using football to rescue young people from the vagaries of slum life, including drug abuse, crime and teenage pregnancies.

Her football club, Nahodha Kenya Sports Association, which trains at Makongeni and Kaloleni boasts of close to 160 footballers — boys and girls aged 9-18 years. 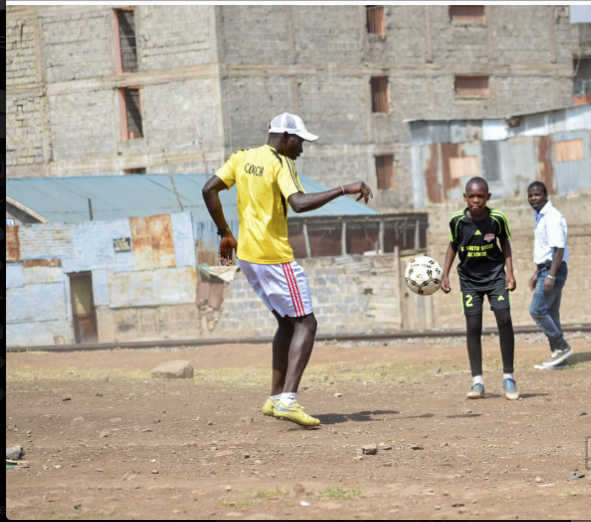 Coach Fred Odhiambo at work with one of his players.
Image: COURTESY 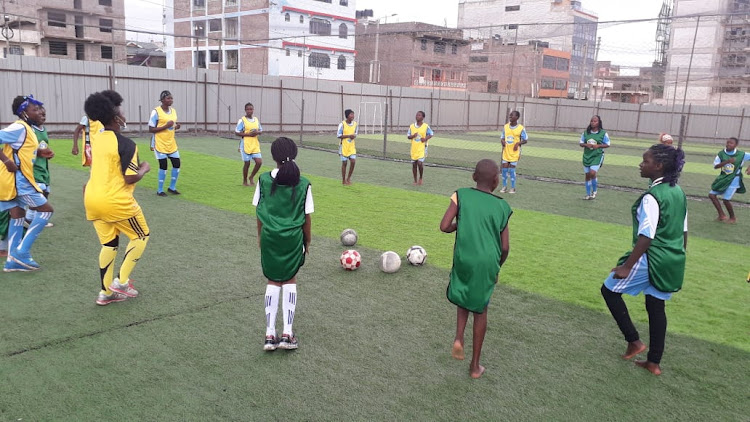 Anne Musyoka takes her players through the paces.
Image: COURTESY

The pre-school to Grade Eight teacher at Farell Jovial Education Centre in Mukuru Kwa Reuben has been a sporty lady since her high school days at Matungulu Girls Secondary School.

"In high school, I was good in athletics, hockey and football. However, I had to take a sabbatical from sports in Form Two due to lack of support. I started working as a teacher in 2012 and while at Farell Jovial, one of our partners expressed an interest in establishing a ladies' football team in the slums. It is then that my love for sports was reborn and I stepped forward to take charge of the newly-formed team," Musyoka says.

Mwangi, 46, had a decorated playing and coaching career in the top flight and the second-tier before he landed at the academy.

As a goalkeeper, he was part of the Mathare United squad of 1998, which clinched the Moi Golden Cup after upsetting then defending champions Eldoret KCC 2-1.

He also had playing stints with Sofapaka, KCB, Kimbo FC and Kenya Pipeline. His coaching resume includes Mathare United, AFC Leopards, Posta Rangers and KCB, all of which he was working as a goalkeeper trainer.

The three tacticians are among numerous coaches in the country who have technology to thank for the leaps and bounds they have made in their careers thus far.

It has enabled them to sharpen their skills and knowledge in line with the modern trends of the game. Without technology, these coaches say they would have to fork out a lot of money — which they do not have — to attend the regular courses.

One of the technologies in the country, which has aided local coaches in developing their careers is the Supa Coach app from Atoto Sports Management.

The app, developed in Stockholm, Sweden, is tailored to the needs of tacticians at all levels, from beginners to professionals.

Musyoka credits digital technologies for saving her a lot of time when developing a training program for the day.

"The online coaching sessions have really built my capacity as a tactician. The app allows me to tailor my tactics according to the training program for that particular day. From then on, I can simply transfer the customised tactics to the pitch. It is a simple app to use without much technological training," she says. 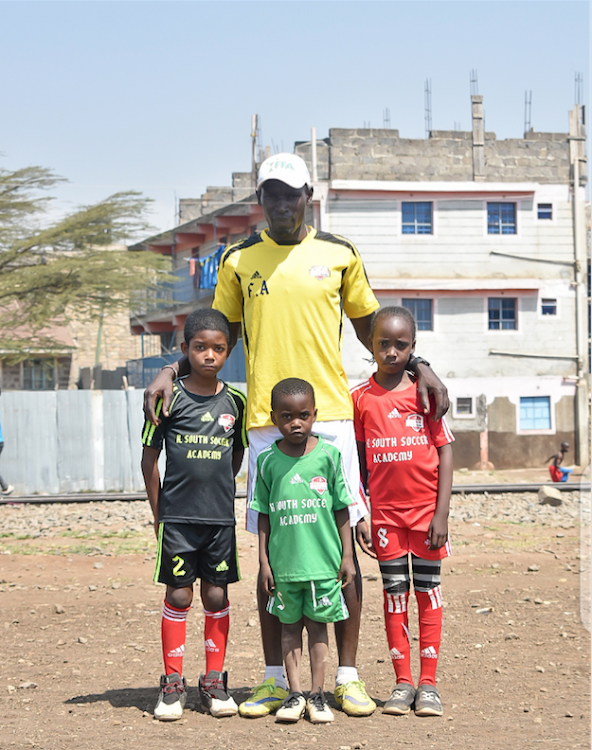 Coach Fred Odhiambo poses with some of his young players
Image: COURTESY

The Nairobi County Academy, after one of their training sessions
Image: COURTESY

Similarly, Mwangi admits that technology has pushed him forward into the future in as far as modern coaching techniques are concerned.

"For example, when I want us to work on scoring drills, I simply have to type that in the app and it will provide different options of training to improve scoring. This is so much different from our playing days when our training was mostly centred on the physical aspects than technical," Mwangi says.

Odhiambo, an admirer of Real Madrid coach Zinedine Zidane, says technology has enabled him to seamlessly instil his football philosophy at Kariobangi.

"My football philosophy is the Dutch kind of football. I prefer my players to dominate possession and to work aggressively to retain the ball once they lose it. For me, to lose possession is a crime that I don't want my players to commit often," Odhiambo, who also played for Western Stima, Mathare Youth, Sony Sugar and Nairobi Water, says.

Thanks to technology, Odhiambo no longer has to carry a huge file to training but only needs his smartphone through which he consults the app on tweaks to the training schedule.

For the three, coaching is central to the bigger vision they have for themselves and their players.

Odhiambo confesses he is so obsessed with seeing his 'sons and daughters' realise their dreams of transitioning to the big leagues as his coaching profile continues to rise.

"This academy is my life and it means a lot to me. I want it to develop world-class students and I cannot see myself wanting to coach any other team until I achieve that. If there's a team that I would have loved to coach, if not Kariobangi South Academy, then that would be Mathare United. But for now, my focus is on the academy," he says.

He admits that most academies in the country do not get their rightful dues when their products make it to the highest level of football. 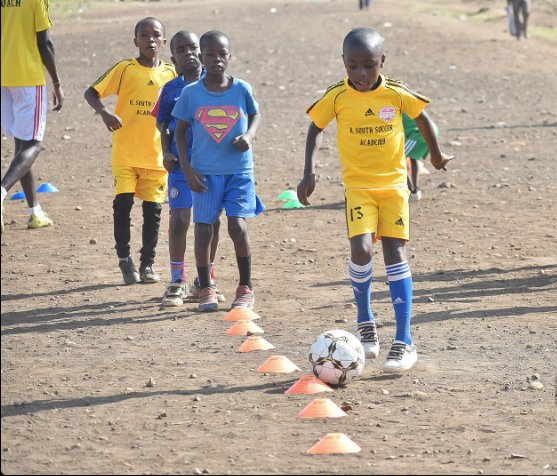 Kariobangi South Academy players in one of their training sessions.
Image: COURTESY

This is a trend he wants to buck by running things differently in his academy.

"It is very sad to see a player making it professional and changing his life completely yet his first coach is still wallowing in poverty. These local academies work really hard to identify and develop talent from the grassroots but their role is not recognised. More partnerships with us will surely allow more talent to come through," the 31-year old says.

On his part, Mwangi's vision going forward is to revive the Nairobi Homeless Street football tournament that brought together homeless players from various sprawling areas in Nairobi, including Mathare, Korogocho, Kawangware, Huruma and Kibera.

"There are many homeless players whose lives changed dramatically by just boarding a plane. It expanded their worldview and gave them ideas to wiggle themselves out of poverty. It would be wonderful for this tournament to be revived," the former goalkeeper trainer at KCB FC, Posta Rangers and Sofapaka, says. 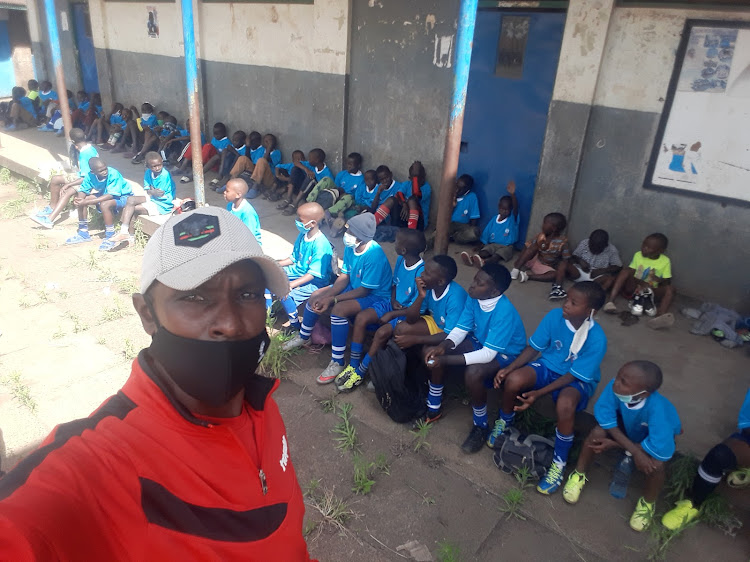 Coach Alex Mwangi poses with some of his players
Image: COURTESY

His experience with street kids stirred in him a passion for the homeless whose lives he has dedicated his to.

He has established a carwash business and ablution blocks in which he employs former homeless players, who are part of his team.

"The carwash business employs six players on full-time whereas others work on rotational basis. After training, they come and assist when the workload is heavy so that they do not go home empty-handed. There are three more employed to manage the toilets although they also work in shifts," Mwangi says.

For Musyoka, her teaching and coaching career seems to have struck a chord with each other.

A believer in education as a tool of empowerment, one of the many offshoots of her career is a scholarship program for players, which has been enabled through a partnership with various schools.

"Social problems like drug abuse, teen pregnancies and crime are caused by idleness. Football is a distraction from bad company because these players have no time to engage in such vices once they return home from training. We mentor them to be morally upright and work on their talents to guard against these cases of teen pregnancies," Musyoka says.

Personally, Musyoka — an admirer and disciple of the tiki-taka style of football — wants to advance her coaching profile to the highest level and has pursued various coaching courses.

In 2019, she undertook a course in sports management and is presently pursuing another degree in sports.

Her dream for Nahodha Kenya Sports Association is a world-class stadium with quality training facilities.

"Ultimately, I want to develop this academy into a world-class academy. My dream is to see every boy and girl in this academy realise his/her full potential and become a better person. I also use football to spread God's word within the community and also as a chance to reach out to these players and counsel them," she says.

The trio are evidence that we don't own the earth but only borrow it for a while from our future generations.  Their work with the future Victor Wanyamas and Dennis Oliechs is the best way to repay their debt to the young generation.

Thankfully, technology will be their able assistant and guide through this journey.