•She was forced to mingle with boys her age on streets of the sprawling Riruta estate in Nairobi for an opportunity to learn football.

•While at Emalindi she did her best and earned a scholarship that secured her an opportunity to study computer science at Kenya Methodist University. 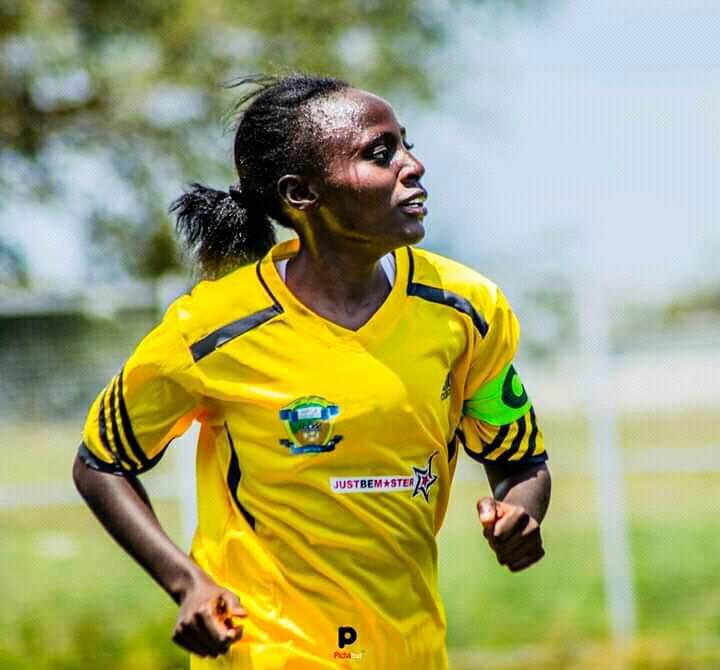 Vihiga Queens captain Enez Mudeizi Mango is keeping her dreams to turn professional overseas alive until the day she eventually decides to hang up her boots.

The computer science graduate from Kenya Methodist University (KEMU) revealed that when she kicked off her career back in 2006, it wasn’t easy getting other girls to play football with her because most of them were engrossed in games that didn’t interest her at all.

She was forced to mingle with boys her age on streets of the sprawling Riruta estate in Nairobi for an opportunity to learn football.

Born 27 years ago into a family of footballers, Mango began showing interest in the game when she was 12.  “I had a passion in football as an individual and more so my dad was a footballer too,” she said.

After playing for a while with the boys on the dusty streets of Riruta, she decided to join a men’s team in their locality. “Since Riruta FC was a men’s team, I could only join them for training as I held on to my dream of becoming a footballer in the future,” said Mango.

She almost gave up because the men were extremely aggressive towards her and did everything possible to discourage her.

However, her deep interest in the game kept her going and as such, she would turn up for practice consistently despite the numerous challenges that came along the way.

“To me, training with boys was more fun and I am happy they made me who I am today by the way.

“Most of the time they considered me stubborn and would turn aggressive in a bid to try and push me out of the team but I stuck in,” Mango said.

Mango said her father, who featured for Telecom FC then, was an outstanding footballer and a perfect role model who gave her great inspiration. “I left nothing to chance as I worked hard to attain his heights in football,” she says. 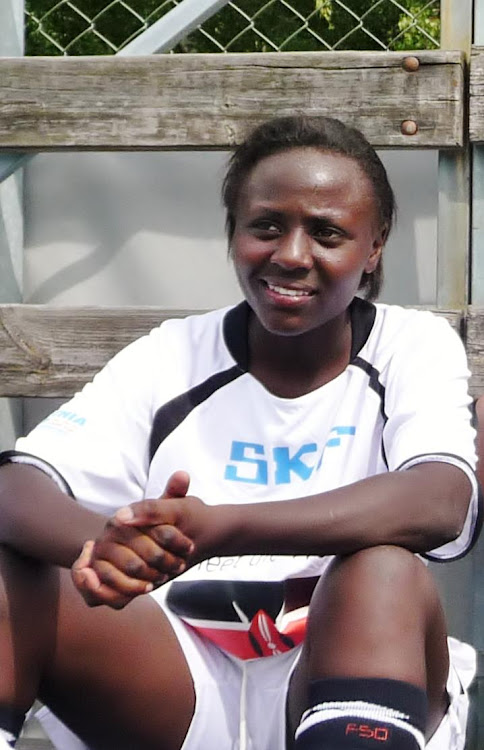 She worked so hard and made a good impression of herself as a footballer while still in primary school such that by the time she was leaving, she had already attracted the attention of some high school coaches in the area.

Upon completing primary school, she joined Emalindi Secondary School in Emuhaya, Vihiga County where she played up to the regional level. Although quite a number of high school coaches expressed a deep desire to have her on their teams, she chose to remain at Emalindi.

“I didn’t want to keep on changing schools because I felt like it would affect my education thus I decided to stick with Emalindi until I completed high school,” she said. While at Emalindi she did her best and earned a scholarship that secured her an opportunity to study computer science at Kenya Methodist University.

“My football talent helped me go through my education without any fee challenges and that’s why my parents never interfered with my talent at any cost.

“I had reduced that burden of schooling and they now only focused on addressing the needs of my siblings and taking care of the family’s basics needs,” she added.

Her years at KeMu witnessed some of her major achievements in football, including in 2013 when they became champions at the Kenya universities and colleges games. In 2014 while still at KeMU, they were crowned the East African Champions. 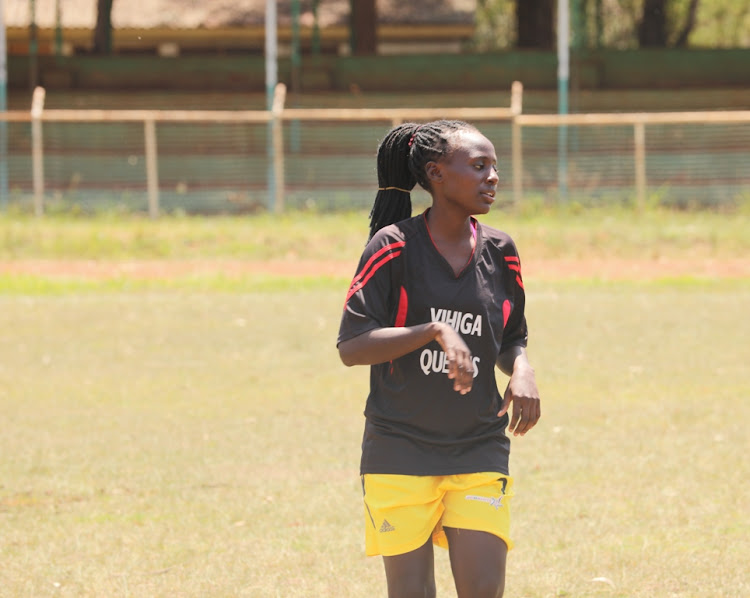 Enez Mango during one of her training sessions
Image: MARTIN OMBIMA

“In 2015, I joined Harambee Starlets, and that was one of my biggest achievements by that time,” she said. “My first experience with the national team was the Olympic qualifiers in South Africa in 2016 where we lost against Banyana Banyana in Johannesburg,” she said.

Mango said Starlets fell to Banyana simply because they were not given enough time to familiarise themselves with the ground and had no time to shake off the jet-lag.

“After that we also moved to Spanish tournament that attracted top teams including Espanyol, Real Betis, Elche, Benfica and Venezuela's  national team as well,” she said.

She further managed to feature in the African Women Cup of Nation qualifiers against Nigeria where she played alongside Carolyne Anyango, Essie Akida, Cherich Avillia, Corazon Aquino, Christine Nafula, Mercy Achieng and Jacky Ogol in the midfield.

Mango said her pursuit of football made her work hard in academics as she sought to dispel the misplaced perception that footballers were failures in life who resorted to the sport merely for survival. 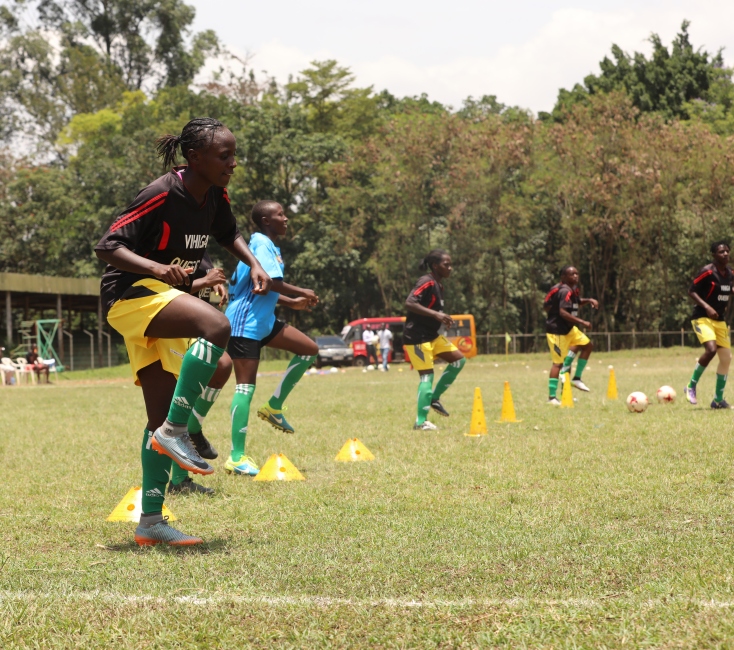 She doesn’t regret taking up a course in computer science given it now earns her a living.

“With the knowledge I have gained, I can install software, I can service a computer machine and other computer works. That keeps me going,” she said.

“I am also looking at life after football. What will I be doing? I may go for coaching or refereeing courses to keep myself around the world of sports,” she said.

“You cannot be a player throughout your life, playing has its time frames. Injuries can keep you out, family issues more so for us girls, so when that time comes I must have something to keep me going,” she added.

She said if coaching or referring courses won’t work for her she is a computer guru and that will never let her down in any case.

“For me I will just urge girls out there who have talent to make use of it and don’t forget books,” she said.

Mango said among the major challenges women footballers are facing is how to cope with menstrual cycles, commonly known as the monthly periods, adding that coaches who understand the problem usually allow the player some time off till the cycle is over.

“When you are experiencing that cycle, it becomes quite challenging on the pitch when you want to focus at the same time you are struggling with crumb pain,” She said.

She says her main role models in football are Dorine Bwire and Florence Adhiambo both of whom also happen to be her greatest competitors.

Career: 2013 while at KeMU champions under Kenya University games.

2016: Olympic qualifiers in South Africa where they lost.

2016: joined Vihiga Queens. They won the Super league and were thereafter crowned the KWPL champions thrice in a row after gaining promotion.