Kenya men's team will battle it out with Burundi, Libya, Seychelles, Sudan, Tanzania and Uganda in the 7-team category.

• It is the responsibility of AfHF to give us a clear way forward. We have also heard of the reports but no confirmation-Ongori

• Lack of test matches has been one of the reasons why Kenya has not shown continentally in recent times. 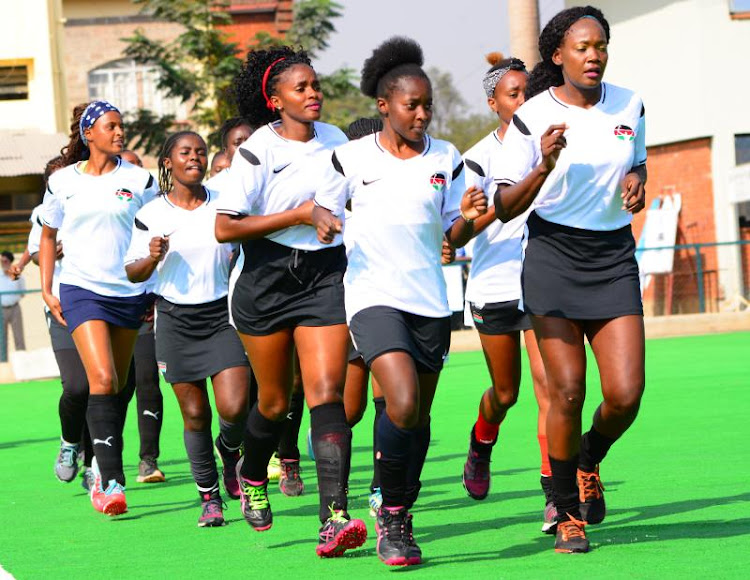 Kenyan women's hockey players led by Gilly Okumu warm up prior to their friendly match against Sports Authority of India at SIKH Union
Image: /ERICK BARASA

Reports over the weekend emerged that the North East Africa qualifiers set for Kenya between March 1 and 7 have been cancelled owing to a spike in the coronavirus cases with Kenya and Uganda declared qualified.

Ongori said resources have been invested in preparations for the event and such a move would disadvantage Kenya, who wanted to test themselves against the region's top guns.

He said the union is yet to receive communication from the African body but any move is welcome since the whole world is living in unprecedented times.

"It is the responsibility of AfHF to give us the way forward. We have also heard of the reports (of cancellation) but no confirmation yet. The stage is set for Kenya to host a decent tournament and we cannot wait to get started. However, we are living in bizarre times and any decision will be considered," said the supremo.

"It is a chance for the team to see where it is in terms of its readiness for the tasks ahead. I have heard that Uganda have hired a coach from Europe and have improved which is good for the East African region."

The Kenyan will battle it out with Burundi, Libya, Seychelles, Sudan, Tanzania and Uganda.

The women's team also face similar opposition with Egypt the only addition.

Uganda is the only team to confirm participation but others are expected to follow suit.

Irrespective of what happens, Ongori said Kenya will continue training even in the absence of international friendly matches. National teams last played competitive matches in July 2019 against Sports Authority Of India sides.

Lack of test matches has been one of the reasons why Kenya has not shown continentally in recent times.

"We won't back down. We will train up to the last minute. It is impossible to host recognised friendly matches or travel but we can get an ingenious way to help players get to a competitive level,' added Ongori.