• Three Nairobi City Stars players have defended coach Sanjin Alagic against claims that he made racist slur against Vihiga United players during a KPL game at Utalii Grounds last week.

• Opiyo said: “I’ve been for many times a victim of racial abuse, so as a black person I know how it feels, and I wouldn’t want anyone from any race to be subjected to such a sick situation." 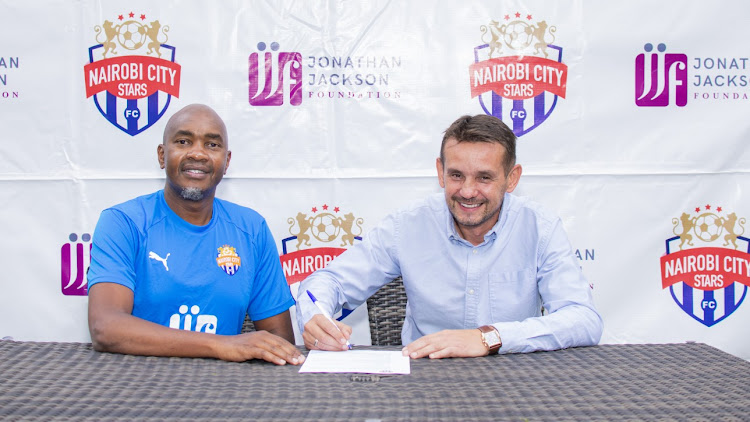 Overall team captain Calvin Masawa, the longest-serving City Stars player said: “Following the allegations made by Vihiga United players that our head Coach Sanjin Alagic made some racial slur towards them, I’m stating categorically that the said statement is baseless, ill-advised and did not happen since I happened to be just yards away from the scene at half time.”

He added: “I’m not here to defend the Coach, because he doesn’t need defending.  This is even more obvious now that Goal has retracted an article they published on the allegations and apologized. In addition to this, I still want to show that it is important that we speak. I am sober, confident and honest enough to say such did not happen and will never happen.”

On his part, Opiyo said: “I’ve been for many times a victim of racial abuse, so as a black person I know how it feels, and I wouldn’t want anyone from any race to be subjected to such a sick situation. Therefore, I would be the first one to condemn such utterances, if there were any,

"Allegations made against our Coach  Sanjin, are very serious and have been there, and heard every single word from him, I must say it’s very uncouth for any person to implicate anyone on such grounds, having in mind how serious this type allegation is treated in our society now.”

Odera one of City Stars’ senior players also defended the coach. “It has come to my attention that it is alleged that our coach racially insulted Vihiga United players. It is my responsibility as a senior player to voice my sentiments to this critical issue of racism, insults, harassment. The beautiful game is about love, inclusivity, passion, togetherness,” said the striker.

He added: “It is very unfortunate because I was actively involved in that match and it is frivolous and damaging for Vihiga United management to bring such accusations against our coach and play with the media over such serious allegations.”

The club also released a statement defending the coach. “The club and all of its employees firmly stand by Sanjin during this time, and is stoic in its belief in him as a personality that has never done anything other than fit in with, and amplify, Nairobi City Stars and Jonathan Jackson Foundation values at all times,” said a statement posted on the club’s website.