Kamura's rise to the top

By the time he was in class seven, Kamura's claws in football had jutted out and the qualities of a good player were evident in him.

•So intense and exciting is the rivalry that on such a day some spouses become opponents for the duration of the game and the mood in the house could be determined by the outcome of the match.

Nobody knows the heat generated by the event more than Robinson Kamura, the man who has led AFC Leopards to the derby venue for two good seasons. 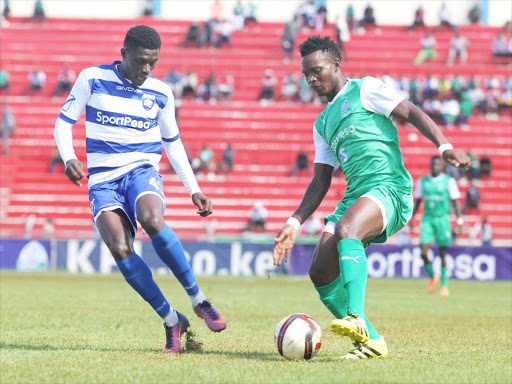 The stakes are usually high, with each of the sides eager to lay claim on the bragging rights.

So intense and exciting is the rivalry that on such a day some spouses become opponents for the duration of the game and the mood in the house could be determined by the outcome of the match.

Nobody knows the heat generated by the event more than Robinson Kamura, the man who has led AFC Leopards to the derby venue for two good seasons.

He has bore the brunt of losing consecutive matches to their bitter rivals Gor Mahia, much to the chagrin of diehard fans.

That notwithstanding, the man is living his dreams as a football star.

Kamura was born on September 30, 1994 in Huruma, Nairobi. He is the eldest child in a family of three children - himself, a brother and a sister.Kamura began exploring the world of football at the age of 8 while attending Daima Primary School in Huruma.

During this period, he was also playing for Young Kings FC, a development side that consisted of children from his neighborhood and coached by Evans Chanzu 'Bance'.

By the time he was in class seven, Kamura's claws in football had jutted out and the qualities of a good player were evident in him.

He had also secured a slot in the starting line-up of the school team.While his teachers fielded him as a striker in school, back home coach Bance thought of him as a good central defender, apparently because standing at 1.85 meter, he towered above most of the players his age and this made him easily win and clear all the aerial balls in the penalty area."Initially, I was playing as a striker in school but my coach Bance decided to turn me into a central defender.

I guess it was because I was the tallest among my teammates."Kamura featured for both the U-12 and U-16 sides of Young Kings before leaving  in 2009 to join FC SID in Dandora.

That was after participating in the U-16 Norway Cup tournament in Oslo where he traveled with the Mathare Youth Sports Association (MYSA) squad for the annual event.

Every year, MYSA sends a team to Norway to participate in the tournament. The final team is selected after intensive trials that brings together at least 100 players drawn from all the sixteen MYSA zones that are spread across Nairobi.

In 2009, Kamura was part of the squad that made the journey under former Mt. Kenya United coach Antony Mwangi.

His activities in primary school however did very little to contribute towards his growth in the sport. "Our school wasn't all that active. We never got to achieve much in competitions."Kamura says he won his first silverware in football in 2008 when Young Kings clinched the MYSA championship league at the organisation's headquarters in Komorock.

Normally, MYSA has independent leagues for each of its zones. The leagues have all the age categories, including U-10, U-12, U-14, U-16, U-18 and seniors. Each league usually produces a top finisher who is selected to face off with winners from other zones during the knockout stages of the competition called the Championship League.

This continues until the two strongest sides among teams from all the zones meet in the finals to determine the winner. So, it happened that Young Kings clinched the U-14 trophy in 2008.

It was in the same year that he sat for his Kenya Certificate of Primary Education (KCPE) and proceeded to join Parklands Boys High School. In his first year at Parklands, their school won the Nairobi edition of Copa Coca-Cola and qualified for the national competition.

His unmatched skills on the pitch caught the attention of Jamhuri High School teachers who offered him a chance to learn in the institution."We had just won Copa Coca-Cola Nairobi finals when Jamhuri expressed interest in me after observing my game during the tournament.

I joined the school in Form Two."Kamura says he was drafted straight away into the first team. A year later, in Form Four, he clinched his second trophy after Jamhuri pipped Kamukunji 1-0 at Nairobi School to bag the county title in the secondary school ball games.

Jamhuri romped to the finals after edging Olympic 2-0. To crown it all, Kamura took home a trophy and a certificate after being named the tournament's Most Valuable Player (MVP).

Their victory secured them a slot in the national school games held at Moi Stadium in Kisumu where they equally stamped authority, playing all the way up-to the finals where they lost to St. Mark's from Kisii on postmatch penalties to settle for second position.

Still, it wasn't a bad fight as such because they  managed to earn the rights to represent the country in the East Africa school games that were held in Nakuru.

Things didn't turn out rosy for them in the regional tournament. They only managed to go up-to the quarterfinals stage and eventually fell to to St Mary’s Kitende from Uganda.Away from school, Kamura was still involved in a lot of football. "I didn't play football in school only.

I also turned out for FC SID in Dandora where I was for two years."In 2014, Kamura got a chance to achieve his lifetime dream of plying trade on the top flight stage. Stanley Okumbi who was his coach at the U-17 Kenya national team found his way to the Kenyan Premier League (KPL) as head coach of Kariobangi Sharks.

Okumbi soon came looking for Kamura and the two reunited at Sharks."Okumbi signed me up at Kariobangi Sharks on a two-year deal. He happened to be my coach at the U-17 national soccer team and had fallen in love with my skills then," says Kamura.

At Sharks, he once again proved to be an achiever, laying claim on yet another trophy, the Madaraka Day Cup at Nyayo National Stadium in 2013.When Okumbi finally left Sharks to join the Mathare United technical bench in 2015, Kamura was also in tow.

He penned a deal with the Slum Boys and stayed there for three good seasons.

In 2017, AFC Leopards head coach Stewart Hall came dangling a contract before him and he just resist the temptation of playing for such a great side. He eventually inked a deal with them.It didn't take long before his leadership abilities came to the surface at the Den.

Only months later after penning the deal, he was appointed assistant captain. In 2018, aged only 24, Kamura took up full responsibility after inheriting the armband from Duncan Otieno who moved to the Zambian Super League.Why was he picked as captain?"That's a difficult question...can’t explain...maybe discipline was key to that decision."Kamura was part of the Leopards squad that lifted the GOtv Shield Cup in 2017.

He says his most memorable moment in football was when he finally realised his dream to wear the popular yellow, white and green colours of Mathare United in his debut match away to Chemelil in Kisumu which ended in a barren draw."My debut game at Mathare United was my best ever because it was a dream come true to play for a team I had grown up admiring."Kamura says he doesn't remember a single moment in his career when he ever encountered a bad day in office, adding that he has always considered challenges experienced during matches as learning opportunities.

His toughest opponent in the KPL?"Timothy Otieno of Tusker FC. I have faced him a lot of times with different teams and he’s a good striker and a fighter too."Kamura insists that there is no team in the Kenyan Premier League (KPL) that make AFC Leopards restless on the eve of a match, adding that the reverse is true."There’s nothing like that. We are the ones who usually give our opponents sleepless nights before they meet us."Kamura has played at all levels of the national team since 2009."I've have featured in international matches for the U-17, U-20 and the senior national teams.

Coach Bobby Williamson gave me a call up to the senior team in 2015, but it was Okumbi who handed me my debut match at the Kenyatta Stadium in Machakos against Uganda in 2017."He says that his best international assignment was against Mozambique when they met in Maputo in 2017.

Locally, he has always admired and looked up to former Kenyan international center back Edgar Ochieng as a role model.

Kamura says he owes his father Samuel Kamura Njoroge and mother Ruth Wanjiru quite a lot in life because they both played a big role in his successful journey in life as well as in football."They have given me all the material and moral support I needed in soccer and school and in life in general up-to now."

He advises upcoming footballers to work hard if they are really serious about achieving their lifetime goals. "They should work hard to realize their  dreams in life. They also need to exercise a lot of patience. God's guidance is also very important, and lastly discipline."Kamura says he spends his free time watching documentaries.