Derby hero appeals to Uhuru to rescue the game

•Uhuru who led other dignitaries in following the proceedings from the VVIP section of the half-filled facility. 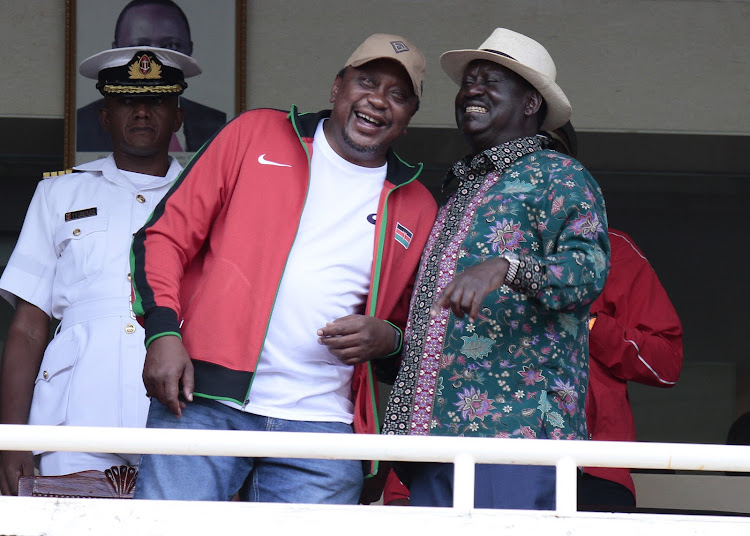 After netting the decisive goal in the Mashemeji Derby yesterday at the Moi Stadium, Kasarani, Boniface Omondi is appealing to President Uhuru Kenyatta to intervene and save the sorry state of the Kenyan Premier League.

Omondi got a lifetime chance to net the sole goal of the derby in front of President Uhuru, who led other dignitaries in following the proceedings from the VVIP section of the half-filled facility.

With the league struggling financially, Omondi who has been a consistent goal scorer in the fixture seized the moment and reached out to Uhuru to save clubs from dishing out more walkovers and players from going for months without pay.

The former Nzoia Sugar player further urged the Head of State, who had n0t watched a KPL match from the Stadium since 2013, to keep the fire burning in a bid to drive fans back ton the stadium.

“It is my hope that he will create more time and come to watch us play. I believe he was entertained and it was my pleasure to be the difference in the match. I urge him to help stabilise the league financially as this will go a long way in improving the livelihoods of the players and will save clubs the shame of dishing walkovers,” he said.

Omondi found the back of the net in the first half, taking Gor wins over their traditional rivals to 30. Despite the win which also saw the defending champions open a seven-point gap at the top, Gor head coach Steven Polack declined the ‘Champions elect’ tag.

Gor have 54 points but the gap could be reduced to four should second-placed Kakamega Homeboyz win their match in hand.

“More than 25 points are up for grabs and I can not say that today’s match was the decisive one. Feels good to complete a double over Leopards but the focus shifts to our Shield Cup matches and the remaining bit of the league matches,” said the former Asante Kotoko head coach.

While Polack could not contain his joy after humbling his rivals, coach Anthony Kimani, on the other hand, rallied his troops to rise from the defeat. He rued tough luck by his boys who arguably dominated for the better part of the match.

“We have a youthful squad and I encourage them not to give up. We have dropped three points and not five and we will seek to rectify the few mistakes we had and look forward to the other fixtures. We created chances and the boys did well after conceding but we were unlucky not to get a goal,” said the former club’s skipper.

Post a comment
WATCH: The latest videos from the Star
by BY MESHACK KISENGE
Sports
09 March 2020 - 05:00
Read The E-Paper