• The winner, Joshua Kipkemboi did not immediately have plans for his money. 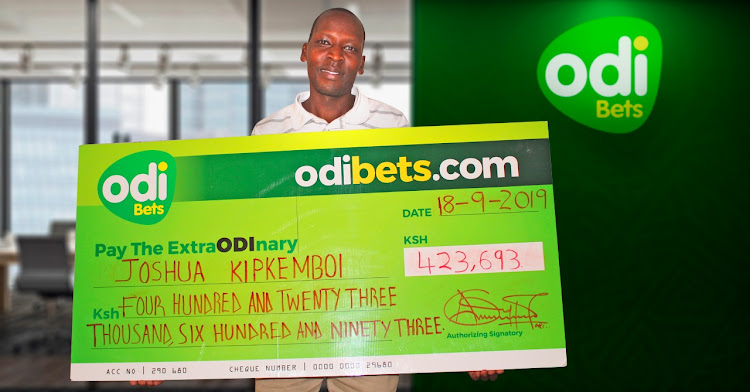 One lucky (or genius) bettor from Kipkaren, Nandi Country has made a life-changing sh.423,693/= off a sh.49/= football bet with Odibets.com.

The ardent Arsenal fan somehow correctly predicted 19 football results over the weekend, earning him the mouth watering pay-out and near 40,000 odibets win boost.

He would have sweat on a mistake he thought he made on the Arsenal game. He mistakenly placed a bet on the Arsenal women’s team instead of his favorites Arsenal against Watford.

His pick, Arsenal LFC won the match against Manchester United in the FA Women’s Super League - and from then on, his other bets went his way.

The unbelievable bet earned him sh.423,693/= exactly from his favorite betting company Odibets.

An Odibets spokesperson, Aggrey Sayi told The Star: “Joshua is a regular and places places multiple bets every week which is why he won.”

“He has been trying to beat us since being introduced to Odibets in July during the BCLB crackdown and has finally done it,” added Daniel Macharia, the lead bookmaker at the company.

The winner, Joshua Kipkemboi did not immediately have plans for his money.

“Since he doesn’t have a clear solid plan to spend his winnings, my advice to him is simple: don’t spend it all in one place,” said his father, a seasoned slots and sports punter said.