• He also said that the person who collected the sample, asked for money. 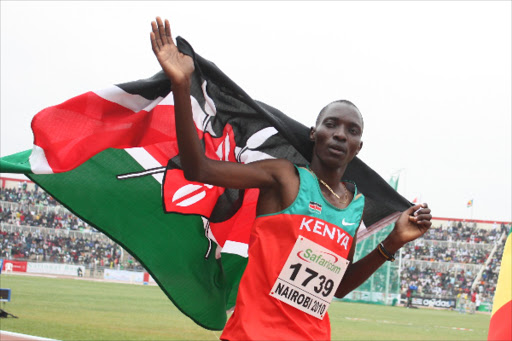 Three-time world 1500m champion and Olympic gold medallist Asbel Kiprop will have to wait for another three weeks before receiving a ruling on his doping case versus the IAAF and the Athletes' Integrity Unit (AIU).

On Thursday, Kiprop, alongside his lawyer, Katwa Kigen attended a hearing session in London where the lanky runner tabled 11-point submissions as he seeks to return to competitive running.

Kiprop told IAAF Disciplinary Tribunal that he had no reason to dope as he was off competition at the time the allegations arose.

"I believe in justice. I will pray and trust in God," Kiprop said

Kiprop was tentatively suspended by International Association of Athletics Federations' (IAAF) Athletes Integrity Unit (AIU) in May last year for having tested positive to EPO, a blood boosting banned substance in an out-of-competition test. The tests were conducted in November 2017 at Kiprop's home in Iten.

And in waiting for another three weeks (estimate) to have a verdict, Kiprop observed: "It will obviously be anxious. I trust in the triumph of truth over falsehoods, fabrications and plots."

"I believe in justice. I will pray and trust in God," he added.

At the hearing, Kiprop claimed that the positive EPO test came to be because drug control officers tampered with his sample. He has also made claims that money was demanded from him at the time the tests were run.

Kigen told the Tribunal that EPO stays in the blood for maximum three months, hence it could not help in respect to Kiprop's competition which was seven months away.

He also said that the person who collected the sample, asked for money, and gave the irregular tip off was withdrawn from the case and his role in the process left blank. This he said proves that there process was flawed.

The Tribunal heard that no declaration was made that the vessel used to collect the sample was clean, uncontaminated and not spiked as required in IAAF sample collection regulations.

"To date, WADA whose accredited laboratory was used to examine the sample states that there are no results on Asbel's sample. This is, in contradistinction from what IAAF/AIU alleged as positive results," heard the Tribunal.

Kigen maintained that Asbel's blood samples for November 22, 2017, being five days before he was implicated does not support the alleged existence of EPO neither does blood sample collected two days after, November 29.

"If my client had doped, these samples of 22nd and 29th would have shown in blood passports," he said.

The lawyer also mentioned that the sample was initially sent to the wrong address, other than the laboratory where it was meant to go for testing.

He said his client despite being told IAAF/AIU would collect samples, he availed himself and did as instructed. "If Kiprop had doped, he would not have availed himself  for testing," he said.

Is Asbel on his way back to track?

The 2008 Olympic Games 1,500m champion Asbel Kiprop could be headed for a breakthrough in the wake of his doping case that has lasted one year. A ...
News
3 years ago
by SUSAN MUHINDI Court Reporter
Sports
23 March 2019 - 00:00