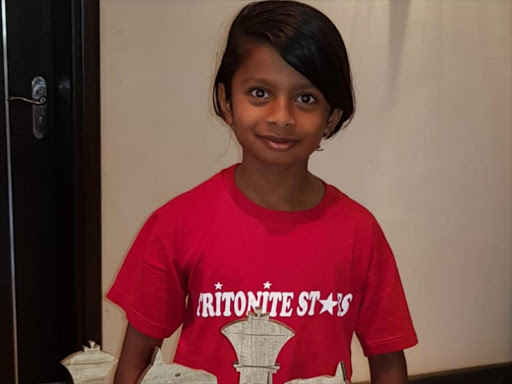 Drish Rakesh Shah displays some of his 2018 trophies at the Village Market on February 9 during the 2018 closing ceremony. /CONSOLATA MAKOKHA

This tournament will also double up as the Nairobi region qualifiers for the 2019 Kenya National Youth Chess Championships. The national showpiece will be held between April 5 and 8 at Bishop Gatimu Girls in Karatina, Nyeri County.

Rakesh amassed the highest number of trophies last season and topped the boys' U10 category. Aguda Lwanga and Odongo- Lwanga too, led the U18 and U14 classes.

The event brings together players in five categories representing the age groups of Under eight, U10, I12, U14 and U18 for both boys and girls. It has attracted more than 20 schools and clubs with over 250 participants. Some of the teams competing today include Nairobi Chess Academy and Club, Thika Christian School, Logos Christian School, Anchors Chess Club, Oshwal Academy, Tritonite Stars Club, State House Girls and hosts Peponi School. Others are Nairobi Academy, Brookside Preparatory, St. Peter's School Juja, Braeburn Imani, and Beacon of Hope Academy.

Last year, MiniChess Kenya Grandprix registered slightly over 1,200 unique entries and Githinji Hinga, the competition's team leader intimates that they are targeting to surpass the 1,500 mark.

"2018 was a successful season and we look to grow 2019 into a bigger and better one. The Grand Prix main aim is to increase activity and in turn raise the standards of the game, and also to motivate players with the lucrative awards (trophies, medals and cash) at the end of each tournament and the year," said Hinga.