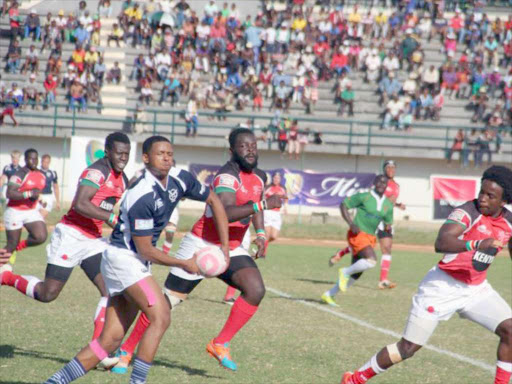 A past U20 action between Kenya and Namibia/ COURTESY

Kenya will face champions Namibia, Tunisia and Senegal in the Under-20 Barthes Trophy slated for March next year.

The side, also known as Chipu, will be seeking to go one place better than the previous two years after falling at the final hurdle to Namibia.

Tunisia finished top in the Northern region earlier this year and earned promotion alongside Senegal, who came in second in the same region.

Pool ‘B’ will pit Zimbabwe against Ivory Coast, Morocco and Madagascar with Uganda headlining Pool ‘C’ alongside Algeria, Zambia and Ghana. The matches will be played between March and April.

Venues for the tournaments are yet to be announced as participating unions have until January 15 to put in a bid. Last year, Kenya finished second in Pool A, having beaten Madagascar 51-13 in the semi finals and lost 37-18 to Namibia in Windhoek in the final. The winner will qualify for the 2019 Junior World Rugby Trophy in Brazil.

Elsewhere, Don Aluoch and John Mbugua will captain Nakuru RFC for the 2018/19 Kenya Cup season, according to coach Mitch Ocholla.

“We have co-captains, Don Alouch and John Mbugua. Mbugua is still a young player and having him there will help us groom the next generation of leaders,” said coach Ocholla.

Mbugua made his senior debut during the 2016/17 season and went ahead to establish himself as the club’s first choice loose-head prop that season before falling behind the seasoned Joseph Kamangu in the perking order last season.