Opinion: Is the Mashemeji Derby becoming a routine win for Gor Mahia? 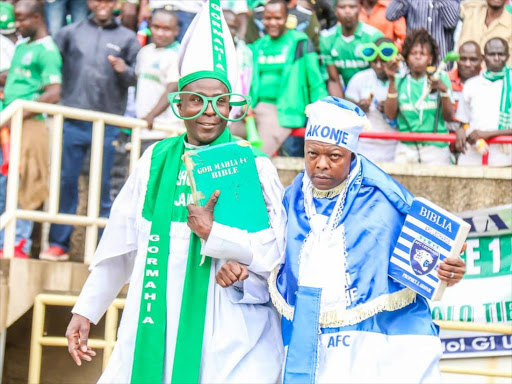 Gor Mahia vs. AFC Leopards. The fixture that we all look forward to every year in the SportPesa Premier League. It is the "Mashemeji Derby", as we like to call it. Kenya's biggest and oldest rivalry in football. Naturally, these two teams are arch-rivals and you would expect that each time they meet, the result would swing either way and consistently at that. These two teams have often set the benchmark for competitive football in the region. However, going by the results in the recent past, Gor Mahia seem to be having the upper hand.

Mind you, AFC Leopards also known as 'Ingwe' have won most of the derby fixtures. Regarded as one of the oldest and most tense rivalries in Kenyan football history, the first such clash was held on 5th May 1968. That Mashemeji Derby was won by Gor Mahia (2-1) in a riveting game that featured, popular football veteran, Joe Kadenge.

22nd July 2018 at the Kasarani Stadium where Gor Mahia continued with their superb form and extended their recent dominance over AFC Leopards.

The match began in earnest and it was a great game to watch. Jacques Tuyisenge opened the scores in the 22nd minute when AFC Leopards' defender Salim ‘Shitu’ Abdala gifted him after a poor back-pass. Tuyisenge was speedy enough to intercept and quickly slammed the ball past keeper Ezekiel Owade.

Ingwe clawed back in stoppage time of first-half through a neat volley by Whyvonne Isuza. That was actually the goal of the game.

At the second half, the game swung from end-to-end and fans were at the edge of their seats. It took George ‘Blackberry’ Odhiambo with a sharp shot to the bottom right corner to break the defense of AFC Leopards who played hard and gave their everything in the match.

Gor Mahia came out victorious at the end of it but interestingly, even the Gor Mahia coach thought that AFC Leopards would bring up their game. Afterall, the last time Ingwe beat K'ogalo was in 2016.

“It was a great derby game but it’s a shame AFC don’t play like that every week when I watch them, today they had some new players so I couldn’t do my homework on them as I prepared for the match,” Gor Mahia head coach Dylan Kerr noted.

“I just said to my players go out there and if you concede a goal don’t put your heads down because we will get another goal and it was a great strike by George (Blackberry). All credit goes to all these players they are worriers, they were brilliant,” the Briton coach added.

The crowd at the Mashemeji Derby in Kasarani Stadium on Sunday 22nd July 2018. Photo / SPN

Which begs the question, is this becoming a routine for Gor Mahia to win this fixture?

Watch the highlights from the Mashemeji Derby, Sunday 22 July 2018