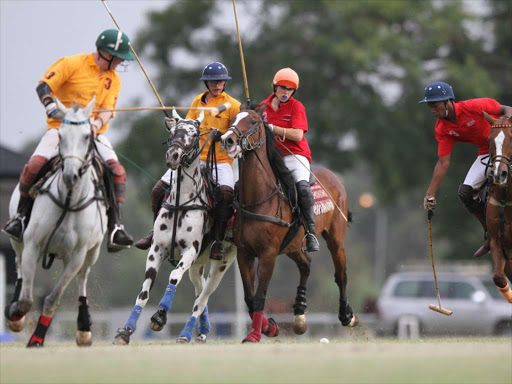 Natasha Tisminiesky (centre, red) sheilds Louis Roumeguere (yellow, 2) away from the ball for Omwakwe Arungah (red, bent) to pick is as Jonathan Stichbury (left) plots the next move at the Nairobi Polo Club. photo/ CONSOLATA MAKOKHA

Mombasa Island Cargo Terminal side was the big winners of day clashes of Davis Cup played on Saturday afternoon at Nairobi Polo Club in Jamhuri, Nairobi.

The other two losers ‘Space and Style’ (Lorenzo Soriano 1, Moses Wainaga 0.5, Anthony Wahome 0 and Karim Abbany -1) and Jonathan-captained RJ Polo will be battling to evade the wooden spoon.

In the last match of the day, Tisminiesky and Omwakwe starred for the MICT, splitting the nine goals between themselves in the action-packed tie. Omwakwe opened the rout with shot from the centre of the 275m-long pitch as Tisminiesky added two unanswered field goals and close the first chukka 3-0.

Omwakwe showed his mastery of dead ball shots when he slotted home a goal from the spot, after Roumeguere crossed Arungah’s ball-chase path in the area in the second chukka.

After a barren four minute’s play, the ball got in a melee and immediately the umpire- Grammaticas threw in the ball, Arungah secured it and drove it at goal where the strategic and timely positioned Tisminiesky tapped it into RJ Polo’s posts.

On resumption, RJ Polo’s skipper Jonathan drew the first blood but it was soon voided by Omwakwe from the 25 yard spot. The two outfits then mounted water-tight defense, restricting the play in the midfield, ending the penultimate chukka at 5-1.

Tisminiesky contributed two more goals in the last chukka to become Day One’s top scorer with five goals, as Omwakwe netted one to bring his tally to four. Izzy’s further consolation goal only accounted for that as the bell soon rung and RJ Polo could not restore parity with less than 30 seconds to the final whistle ending the game 9-2.

In the other matches played, Samurai dueled Royal Salute and defeated them 5-4 as Samsung hit ‘Space and Style’ 7-4. Nzomo is positive the hiss lineup- Samurai- will overcome the opposition from Royale Salute once again on Sunday as they look to finish the tournament unbeaten.

“We are yet to train together as a team, since the last time we played in December in Manyatta. We made a lot of errors in the field but I am sure we will be in sync in tomorrow’s clash,” said Raphael who seemed frustrated on-pitch playing baby ponies.

“This was the first ever polo matches for my newly acquired ponies. They have been well schooled for polo and they are learning quite fast, though they are cannot play my handicap speed and the twists and turns yet. I am patient with them,” added Nzomo who for a better part of the 2017 season played his daughter’s- Hiromi- ponies.