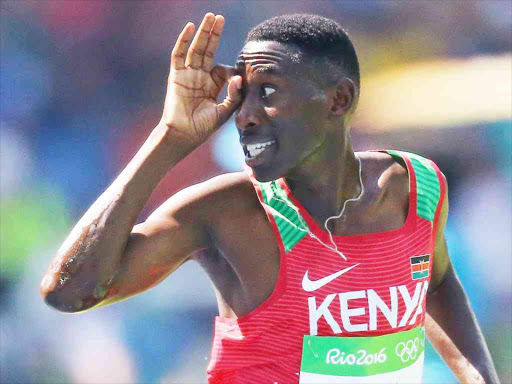 Olympic 3,000m steeplechase champion Conseslus Kipruto yesterday said he is ready for his first world title in London next month despite suffering an ankle injury during the national trials last month.

“I am happy that I have been training well ahead of London championships,” he said.

“The injury forced me to withdraw from the Diamond League in Rabat but I have since recovered,” he noted.

If he wins gold, It will be his first world title in three appearance at the IAAF World Championships.

“I hope this time round, I will perform better than the previous two championships. I am excited to qualify for my third World Championships after winning gold in Rio Olympics last year,” he said.

Kipruto, whose athletics career was honed at Kosirai High School in Nandi County, made his international debut at the 2012 World Junior Championships in Spain, winning gold in his speciality.

He then gained selection to the senior team for the 2013 World Championships in Moscow, Rusia, taking a silver medal behind Kemboi.

The rivalry between the two was also loud at the 2015 World Championships in Beijing, where Kemboi re-affirmed his status as the all time best in the water and barriers event winning gold in the season, where Conseslus had dominated.

The four have intensified their training as they hope to continue Kenya’s dominance.

For Kemboi, it will be all familiar ground, having won gold at the 2012 London Olympics at the same venue.

Kemboi is on a revenge mission and has announced his intentions to win his fifth title after he was disqualified during the Rio Olympics over field infringement.