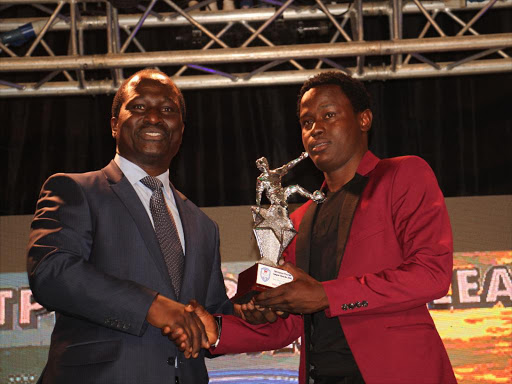 season where there was quite frankly no noticeably standout player,the 2016 “Footballer of the Year” was bound to be a surprising choice.

And what a big surprise it was when Western Stima rookie forward Kenneth Muguna was crowned the “Sportpesa Footballer of the Year”.

The fleet footed attacker in what was his first campaign in the top flight league held off the challenge of seasoned campaigners and household names like Tusker title winning duo of midfielder Humphrey Mieno and goalkeper David Okello,Ulinzi Stars and KPL golden boot winner John Makwata as well as the most promising player of the campaign,Gor Mahia left back Eric Ouma.

”This is an amazing honour for me in my first year in the league.I never expected it this early in my career. I’m glad because of the guidance of my coach (Henry Omino) and the support from my team-mates,family and above all God’s blessings I was able to pull it off. This award motivates me to continue working hard so that I can achieve my goals as a footballer,” said Muguna.

The individual honour now marks Muguna as the hottest property in Kenyan football with him revealing that a host of clubs including AFC Leopards and champions Tusker are hot on his trail.

The 20-year old also won the “Midfielder of the Year” award and came second in the “New Player of the Year” category, feats which brought his total prize money collected to a whopping Sh1.6million, plus two flat-screen televisions as well as an LG K10 smart phone courtesy of event partners LG Electronics.

upset the odds to emerge victorious in their categories.

Coach of the Year

Defender of the Year

Midfielder of the Year

Fair play Player of the Year

New Player of the Year

Team Manager of the Year

Fair Play Team of the Year

Assistant Referee of the Year

Referee of the Year