Conjestina back in psychiatric care in Kisumu County 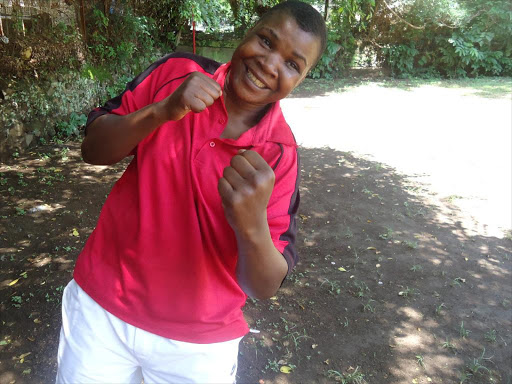 Former Kenyan Boxer Conjestina Achieng at an event in Kisumu in 2014 where she vowed to bounce back to boxing industry. /FAITH MATETE

This is after a well wisher took her to hospital at ward eight.

Conjestina, remembered fondly as "Hands of Stone", was at one time ranked number five in the world and became the first African woman to hold an international title when she beat Uganda's Fiona Tugume to take the vacant WIBF middleweight belt.

According to elder brother William Ochieng, Conjestina's condition has not been stable and the situation had now taking a turn for the worst.

The brother said the former champion’s life has never been the same since her condition worsened.

He said the deteriorating health sitution i making it very difficult for them as they lack the capacity to cater for her proper treatment.

“Her condition is a heavy burden to us because we cannot cater for her health expenses. I am the only one with my mother. She is getting older and growing tired. We have to look after Conje, and other members of the family," William said.

He is disappointed because be believes government agencies should have done more to help Conjestine who was once a hero in the boxing industry.

“We are disappointed because this is one girl who once placed this country on the map from her outstanding performances in the boxing industry yet now she cannot be helped.

She cries that she cannot even be recognised anymore.

“We are still wondering as a family where we went wrong or what wrong did Conje do to deserve such treatment," William said.

He said it was so painfully that her sister who was onces famous has turned into a lighting stock by various people.

The brother said during her sickness they have witnessed a lot and heard many things from people some saying that she is fine yet they have never visited her in Yala to see the condition she was living in.

“Some people have even turned her into a business where they want to collect money from her yet she gains nothing,” said Ochieng.