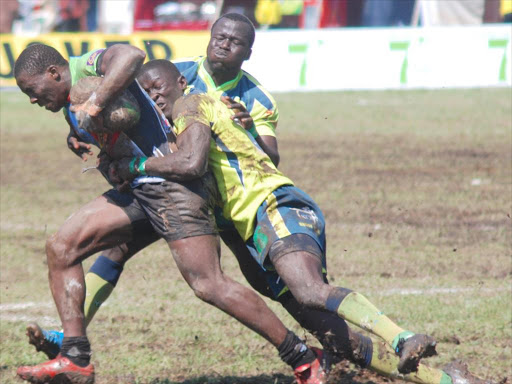 Quins and KCB players during an earlier Dala 7s Safaricom series in 2014. The telecoms company and Kenya Rugby Union are reported to be discussing a new deal towards funding the series. Photo/FILE

Safaricom is in talks with Kenya Rugby Union over a possible sponsorship deal.

Talks between the two parties are reported to be positive and an agreement could be reached before the new season for Sevens gets underway.

Last year, the telecoms company parted ways with KRU citing lack of transparency under what they termed as abusive relationship.

However, CEO Bob Collymore had signaled that the company did not close all the doors and was willing to come back as long as there were changes at the Union.

Last year during the annual Safari Sevens, Safaricom offered the union Sh30million and revealed there were plans for a long term deal.

Talks between the two started after March 2016 elections which saw a new KRU vice chairman, secretary and treasurer elected.

Earlier on, the Union had revealed two parties interested in sponsoring the 7s circuit as well as Safari Sevens.

Sportpesa was mentioned as the other party but at the moment KRU is in talks with Safaricom alone.

A source at KRU says the only stumbling block to the deal was whether Safaricom were coming back as main sponsors or just partners like they did last year during the Safari sevens.

The new season for the shorter version of the game starts on August 6 in Nakuru and both parties are confident that deal will have been reached by then.

Both parties did not reveal duration of the new deal.