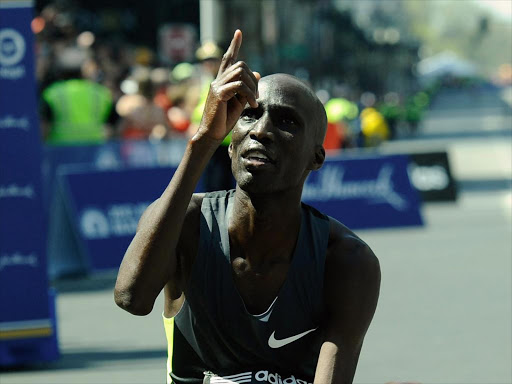 Wesley Korir of Kenya gestures after crossing the finish line as the winner in the men’s division of the 116th Boston Marathon in Boston, Massachusetts, USA, 16 April 2012. /EPA

AFTER placing fourth at the Boston Marathon a week ago, Wesley Korir wants to be included in Team Kenya to the August’s Olympic Games in Rio de Janeiro in Brazil.

The legislator, who was handed warm reception at Eldoret International Airport on arrival from Boston, believes he has what it takes to fly Kenya’s flag at Summer Games in August. “Going by my current form, I believe I am readsy for the big stage,” he said. Korir placed for after clocking 2:14.05 at the Boston Marathon last Monday.

Korir, who is also Cherangany Member of Parliament revealed that he was enjoying top form and this being his only opportunity to run at the Olympics, he feels AK should hand him the opportunity to represent the country. “For me, this the only chance I can run at the Olympic Games because my age won’t allow me to compete in the next. I have analysed the weather conditions in Rio and they suit me perfectly well,” he added.

Korir blamed lack of coordination amongst Kenyan athletes for the poor performance in Boston. “We didn’t put our act together and that is where we went wrong hence the crown went to someone else,” Korir said.

“Personally I was poised to win but I responded late after realizing that my colleagues had fallen off the pace and the Ethiopians opened a wide gap,” he adding, the Olympic Games will be about tactics and brain.

The late Samuel Wanjiru is the only Kenyan to have won men’s Olympic Marathon title. Korir, who has a personal best time of 2:06.13 boasts of three titles in his marathon career. He won the 2008 and 2009 Los Angels Marathon and claimed his major title in Boston in 2012. He was appearing for the fourth time at the Boston streets, having won 2012 edition and placing fifth both in 2013 and 2015.