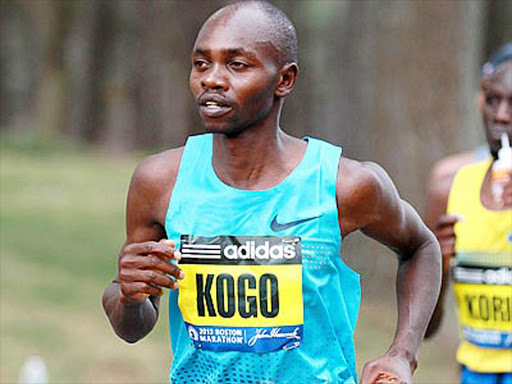 Micah Kogo at the 2013 Boston Marathon.

About three years since shifting to marathon from his 10, 000m specialty, a confident Kogo is enthusiastic of finding his niche in marathon.

He made his marathon debut at the 2013 Boston marathon clocking 2:10.27 while finishing second and later lowered that to 2:06.56 when he placed fourth at the Chicago Marathon the same year.

“Since I shifted to marathon in 2013, I have seen my career progress. I am very motivated by my performances so far, I am willing to make a name in this specialty,” Kogo said.

Kogo first tried his luck on the track over 5000m and 10,000m before opting for road races.

He represented Kenya four times at the world athletic final in 5000m winning two silver and two bronze medals. He won a silver medal over 10,000m at the 2008 Beijing Olympics and finished seventh at the 2009 Berlin world championships in the 10,000m event.

He says he will be using the Paris marathon to seek an impressive time and performance with his eyes set on a slot in Team Kenya for the Olympics Games in Rio de Janeiro, Brazil.

Kogo was part of the Kenyan contingent that headed out to Eugene, Oregon in the United States for the 10,000m trials to decide Kenya’s team to the 2012 Olympic Games in London.

“I have represented Kenya once in the Olympics and I still have a dream of doing it this year as a marathoner. I hope I will work hard to get a better time that might catapult me to the Rio Games,” Kogo said.

He finished tenth at the Frankfurt Marathon last year and finished fourth at the Houilles 10km race in France, in December.

“Road races are good for build up and that is my strategy for endurance and speed,” he added yesterday.

Kogo who was once a butcher in his rural home has struggled along the way into making a name for himself in athletic circles.

The 28-year-old Kipruto, the 2011 IAAF World Championships marathon silver medallist came out on top at the first IAAF competition of 2016 after a six-man battle over the last 10 kilometres to cross the line in 2:10:18.

In the last 10km, the leading pack was down to Ethiopia’s Feyisa Bekele, Shura Kitata, Abdela Godana, Alemu Gemechu and Gebre Mekuant, as well as Kipruto as the lone Kenyan surrounded by a swathe of rivals.

The 25-year-old Gemechu was first left behind and the leading group waved goodbye to Mekuant after 36 kilometres and then Godana after 38 kilometres.

At the 39km mark, the 32-year-old Bekele started to slow down, leaving the top prize to be disputed by Kitata and Kipruto. After Kitata and Kipruto took turns at the front, the pair were still check-to-cheek with 200 metres to go but Kipruto’s strong finish gave him the victory after the thrilling finale.