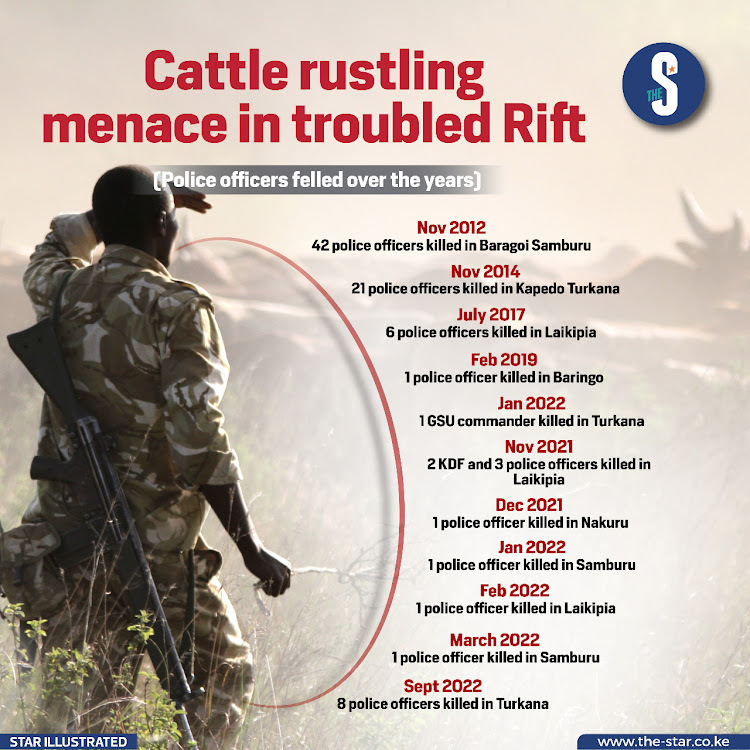 The fight against banditry and cattle raids in insecurity-hit Kerio Valley region has gained momentum following government decision to reinstate the National Police Reservists to assist security team in cracking down on the criminals.

The joint security effort is also expected to boost the war against drug abuse and consumption of illicit brew among the youth who are expected to be the main players in the vice.

Armed bandits are blamed for the killing of hundreds of people, displacement of thousands of families and loss of property. In most cases, the bandits stage attacks in broad daylight, outwitting security personnel who have been deployed to restore law and order in a region that has experienced protracted armed conflicts.

The police reservists  in the region were  disarmed during the tenure of the then Interior Cabinet Secretary Fred Matiang'i under unclear circumstances, making it difficult for police alone to contain banditry and cattle rustling incidents.

But President William Ruto during a tour of Kerio Valley recently directed the reinstatement of the reservists  following increased cases of insecurity, saying they are conversant with the local terrain.

And following the President’s directive,  Interior CS Kithure Kindiki toured the region last week following the killing of two girls from the same family, who were looking after their father's animals.

Kindiki said the government will deploy 450 police reservists to boost security along the valley.

Apart from the problem of insecurity, communities along the valley are struggling with the menace of alcohol and drug abuse that is taking a toll on the lives of young people. Several lives have been lost to the menace, with some youths abandoning learning institutions to engage in drug abuse, leading to criminal activities.

However, the redeployment of the reservists will also be a great boost in the war against alcohol and substance abuse that has become a major concern among the youth, especially along the Kerio Valley of Elgeyo Marakwet county.

Chiefs and their assistants have failed to control cases of alcohol and drug abuse in their areas of jurisdiction because of lack of support from police.  In fact, there are claims that police along the Kerio Valley collude with youths engaging in the vice to frustrate the work of chiefs in fighting the drug menace.

A chief in Tot subcounty recently cheated death by a whisker after a gang of drug addicts confronted him over what they termed as his relentless efforts to eradicate the vice in his location.

There are also increase of cases in the region where the drug addicts waylay and rape girls and women, a situation that, if not checked, might soon be catastrophic. But the residents are optimistic that with the reinstatement of police reservists, the challenge of drug abuse will be contained.

It's also encouraging that the government has moved with speed to review police reservists policy to improve their management and conditions and terms of service as a measure to restore peace along the Kerio Valley.

The police reservists, according to the Interior CS, will be equipped with uniforms and arms, besides being paid some token to motivate them to be more effective in their work.

The government will also capture their details digitally, vet and train them afresh before releasing the firearms.