MWAURA: Why President Ruto is right on role of opposition leader

• It’s about time that we went back to the drawing board and re-introduced the Office of Official Leader of Opposition.

• The intention that competition would fizzle out, has come to a cropper. In fact, it has only led to a threat to the stability of the state. 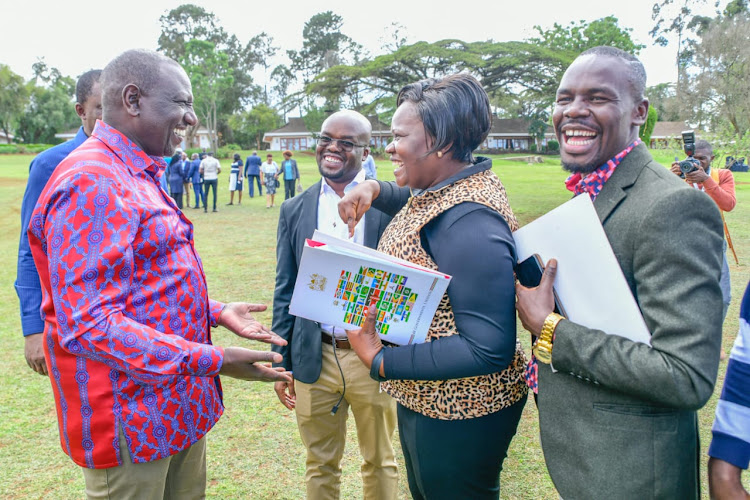 Notably, the President is clearly a man on a mission. He held a three-day retreat of the Cabinet and Principal secretaries, together with the leadership of Parliament, and the Council of Governors.

He thus set the stage for a better working relationship with the executive arms of both levels of government and Parliament. It was promising to see an array of all these leaders assembled to plan ‘The Plan' to ensure the implementation of President Ruto's agenda for the nation collectively.

The President used a bi-partisan approach since he invited governors elected on Azimio, to the retreat in their capacity as chairs of the 19 or so sectorial committees of the CoG.

This approach is consistent with his recent memorandum to Parliament, proposing the return of the Office of the Opposition Leader  as a means to enhance transparency and accountability in government.

Indeed, during his first media interview at State House, the President said power has a way of getting into people’s heads and that he desires effective oversight of his administration.

The memorandum, if implemented, will see Cabinet secretaries and their deputies (CASs) go to Parliament to answer to questions on ‘what they are doing in their ministries’ to serve Kenyans'.

The architects of democracy ensured the opposition is part and parcel of Parliament to have checks and balances. However our pure presidential system has entrenched the ‘winner take it all’ syndrome, thus necessitating arrangements such as the ‘handshake’ mongrel government and BBI proposals that have been a threat to the very democracy, rule of law and equal opportunity for all.

Research has shown consistently that countries that have been able to progress have an element of a strong state; but also a fair expansion of the democratic franchise so that any country’s leadership, business and other spaces aren’t a preserve of a select few. Curiously, the real leadership of the opposition is outside of Parliament.

The leader of Minority is thus to a certain degree, a mere delegate, if not imposter. Having experimented with this arrangement in the last three general elections, it’s about time that we went back to the drawing board and re-introduced the Office of Official Leader of Opposition. The intention that competition would fizzle out, has come to a cropper. In fact, it has only led to a threat to the stability of the state.

Further, bearing in mind that the last general election was the closest, yet most peaceful in our country’s recent history, it is imperative to interrogate the statecraft that procured this desirable outcome.

Apart from having a more experienced IEBC, with a solid chairman and the use of technology, the position of Prime Cabinet Secretary as crafted by the Kenya Kwanza and copied by Azimio also played a critical role in the matrix of the game of numbers.

Both sides of the political divide were able to assuage certain regions of the country (Western and Lower Eastern) that they had a stake in the government, whichever way the outcome. This means that going forward, this new position will serve as a key plank in coalition building towards the formation of government as it helps in the ‘sharing of the cake’.

The apex of our country’s leadership is aspirational to the communal aspirations of our [more than] 45 tribal nations, especially the five major ethno-political alliances of GEMA, the Kalenjin, the Luhya, the Luo and the Kamba that constitute over 70 per cent of Kenya’s population.

I hold the view that, indeed, we over-devolved in to the 47 mini-states called counties, hence breeding a culture of ‘countyism’ a phenomenon that is increasingly informing the building blocks of our national governmental architecture.

The apparent correlation of 47 counties against our 45 tribal nations has largely made sure that representation and government resources reach to as many people as possible. To a great degree, this has made the country more stable than before.

However, from the beginning, the impact on our country’s economy is huge, but if counties become true engines of growth, Kenya can be able to attain its full potential, as a an upper middle income economy and society. This can be achieved through leveraging of technology to remove human agency and/coupled with a robust, transparency and accountability mechanism.

Moreover, our poverty producing politics whereby leaders literary use lots of money to ‘buy’ voters, systems, and, therefore, their political seats, predisposes them to stealing and siphoning off money from development projects/priorities to election campaign financing.

This corruption stunts and stalls development as a public good for all. The insatiable demands by individual voters and groups to their leaders over the the five-year period and campaign season makes the leaders to eventually become poor, just like the voters whose loyalty they were trying to buy.

This vicious cycle thus needs to be broken through effective regulation of campaign financing, a robust elections management system and basic but dignifying retirement/exit welfare plans for leaders.

This will de-risk our poverty producing politics into a normal ‘occupation’ that attracts the best minds for the best interest of our country.

“Visit will be of great significance to Homa Bay, entire Nyanza region.”
News
3 weeks ago

He is expected to commission the Homa Bay municipal market.
InPictures
3 weeks ago

President to launch the first phase of the 5,000 affordable housing programme in Homa Bay
Counties
3 weeks ago
Post a comment
WATCH: The latest videos from the Star
by ISAAC MWAURA Columnist
Siasa
14 January 2023 - 05:00
Read The E-Paper