AJUOK: Why Governor Sakaja should tighten the screws on DP Gachagua

• In the spat between Sakaja and Gachagua, the Nairobi Governor comes out looking like a saint.

• My advice to him is to squeeze the political nuts on the DP some more, because being on the right side of history is a very rare thing in their party, 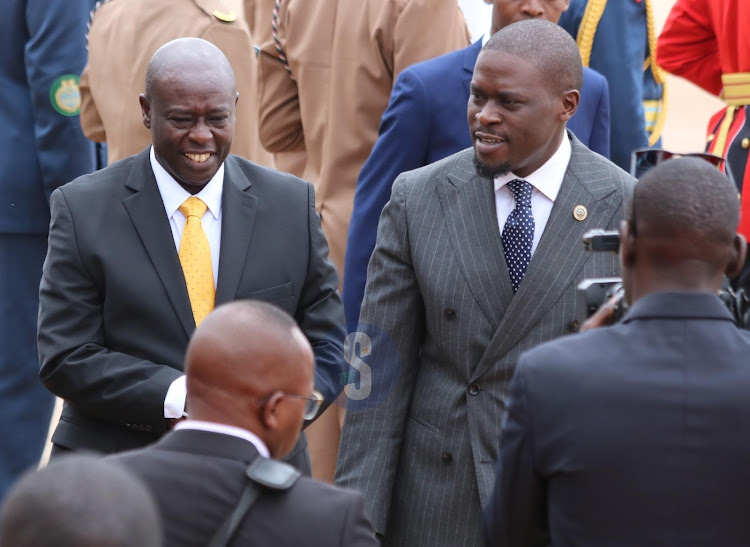 I am a heavy consumer of conspiracy theories, because in them, I at least get what I consider answers to difficult questions.

As a reader of many books, when in need of closure over difficult unanswered topics, I have found out over the years that resorting to conspiracy theories provides a safe environment for the said closure.

One of the theories I hold in my head is that in that moment last year, when then DP William Ruto had to pick between the popular Kithure Kindiki and the unpopular Rigathi Gachagua for his running mate.

Ruto consciously went for the man who, if they won, would ultimately be the black sheep of his government, making him, the boss, smell of fresh roses.

I am convinced that President Ruto was aware even then of problems with his own brand, having endured perennial accusations of graft and possibly seeing himself as a very divisive figure.

But by picking a character worse than him, he would enter government as the more acceptable face of the ticket. I sort of love this political philosophy, already widely practiced by governors across the country.  The governor candidate picks an unsavoury character for deputy, leaving us all praying that nothing happens to the boss, because we can’t live with the scary possibility of his deputy rising up to the top seat.

It is a clever way of keeping an ambitious deputy in check like a loyal puppy, by throwing him the bone of power and prestige, while ensuring he is so unpopular as to not hold no real thoughts of taking over your office. In a way, I think DP Rigathi Gachagua has been baited this way, and with a tongue that knows no boundaries, has swallowed the bait enthusiastically.

In recent times, there have been altercations between DP Gachagua and Nairobi Governor Johnson Sakaja over the management of city affairs. Ordinarily, you would expect that the second most powerful man in the country and the governor of the capital city — both members of the ruling party — would have internal mechanisms to resolve their disputes, rather than broadcast them in the media.

However, one thing politics teaches you is that these matters are made public because two antagonists are never really addressing each other, but like barking dogs, are either in the service of someone else, or are targeting someone bigger than what the naked eye can see. Simply put, Gachagua and his followers may be looking past Sakaja towards who they think is the real power behind the Nairobi governor.

In the short period of his reign, Governor Sakaja has acquitted himself quite admirably. The suave and largely detribalized city father has kept on the unity agenda, unveiling a country executive committee that, much to the chagrin of the DP, is the face of Kenya and goes beyond party lines.

In sharp contrast, the DP reminds me of an ancient tribal lord, standing on an anthill with a blunt spear, chanting sterile war tunes. In words and actions, he lives in an era gone by, of tribal supremacies and in this little bubble where supposedly, election winners enjoy the spoils alone while the rest of the country watches.

In the spat between Sakaja and Gachagua, the Nairobi Governor comes out looking like a saint. My advice to him is to squeeze the political nuts on the DP some more, because being on the right side of history is a very rare thing in their party, so he has to enjoy his day in the sun.

The DP likes to refer to himself as a child of the Mau Mau. It is laughable how politicians from the Mt Kenya region often feign bravery by associating themselves with the freedom fighters of the 1950s, whenever convenient. But the Mau Mau had a cause — freedom and justice.

DP Gachagua’s politics since coming into office mirror that of a man seeking merely a tribal base from which to bargain at the national platform. It is a stretch to attach the Mau Mau to his pursuits. If anything, by having his political base go after Sakaja in the manner he has, creating a wave of ethnic nationalism this early in the life of the regime, he risks alienating his own boss, President Ruto, and compromising his standing in the government.

At least one MP has already mentioned the impeachment word with the regard to the DP, yet this regime is just four months old!

It may not be in the President’s long-term interest to ask his deputy to tone down on the divisive ethnic rhetoric, but the DP must surely know that a regime facing the difficult tasks of tackling the runaway cost of living and a restive unemployed youth population can do with one less tongue on the loose sowing seeds of discord.

I have a final conspiracy theory.

I submit that the DP and his political base may be worried that President William Ruto may pick a different person as running mate in 2027. Of all the possible picks, Governor Sakaja would be appealing, especially to the youths across different tribes.

Indeed, if he makes Nairobi work in this term, he would be deserving of a higher appointment. I believe the DP’s people, even though their timing is poor, are attempting to clip the wings of the governor early enough, to reduce the competition when reelection time comes.

Their way of handling it probably achieves the opposite effect, if you ask me. Hiding behind matatus and the perceived persecution of a particular community in the city only helps unite those who want a more functional, cleaner and planned city behind the governor. Well, if he loses the support of one tribe and gains all the others, that doesn’t strike me as a bad deal at all.

The coming months will be difficult for the Kenya Kwanza regime as it navigates through the reality of governance versus the luxury of campaign promises. In a government with very few voices of reason, Governor Sakaja should not allow bullies riding on loud rhetoric to blunt his own voice of cohesion and unity.

I invite him to make life difficult for the DP and his ilk by standing firm on his agenda for the capital and asking the DP to take a walk, in not very polite terms. At any rate, he is answerable only to the electorate in Nairobi, and his perceived Azimio coalition ties actually help him keep a stable government of his own, especially given the make-up of the Nairobi County Assembly.

If the divisive rhetoric guys come for him, we Nairobians will back him!

Wamatinga warns Sakaja of impeachment over tiff with DP

Sakaja can only speak to Ruto not his deputy, says Orengo

Says the constitution mandates that we conduct affairs with respect, mutual corporation
News
1 month ago

The duo differed over plans to eject long distance Matatus from CBD.
News
1 month ago

He said that the removal of matatus from the CBD will disrupt business.
News
1 month ago

The MP's remarks come after Gachagua warned governor on plans to eject matatus from the CBD.
News
1 month ago
Post a comment
WATCH: The latest videos from the Star
by COLLINS AJUOK
Siasa
08 January 2023 - 06:48
Read The E-Paper