As a nation, let’s demystify the presidency and make it approachable and human-like. 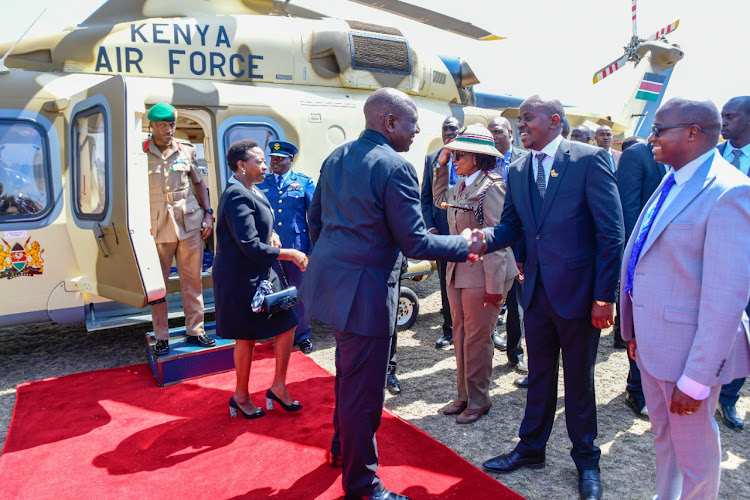 Many states, especially those in the Commonwealth, have created a rather unfriendly show of might with the installation of a man or woman who is permanently standing behind the head of state - the aide-de-camp (ADC).

In the US and other powerful countries, these high-ranking officers exist. But they do not photo-bomb every image taken in public of the head of state. Their mission is essentially to transport the briefcase permitting the use of nuclear weapons.

They can also provide general assistance to the president. For instance, at times the ADCs are seen placing the president's speech on his lectern when he arrives, or holding up notes during award ceremonies to remind him of the official words to be pronounced when handing over medals or chit-chatting in an informal dinner.

This is a tradition that surely we can let go. It’s dead. Let's stop holding unto it. Moreso, when they have to be in complete military attire.

One only needs to look at the entry of heads of states at any of the UN General Assembly to see the comedy in this tradition. One would think that, many times, this is a deliberate ploy to intimidate the citizenry. Remind them, constantly, of who is in power. Indeed, power corrupts, and absolute power corrupts absolutely.

Those who have read the Clive Foss’s Tyrants: 2500 Years of Absolute Power and Corruption, Jonah Anguka's Absolute Power, or Francis Imbuga's Betrayal in the City will find this absolutely exciting.

As a country, we continue to imagine that the mere visibility of instruments of force such as the police can enforce the rule of law in public. We forget that hidden cameras and a working Judiciary can do as much. The former is a shortcut used by lazy people in power to govern.

In the US, though the ADCs are literally invisible, the US president never misses his notes, water or the football whenever he needs it. I hope he never get to use the last one any time soon, or any time at all. The football is the leather handbag carried by the American president’s ADC anywhere he goes. It contains the codes and other communication protocols to initiate the use of nuclear arsenals.

In France, ADCs serve the president, as commander-in-chief of the French armed forces. There are generally three, including one who traditionally serves in the French army, and all of who are at the rank of lieutenant colonel. Incredibly, we never get to see him until the unlikeliest of times, like when President Emmanuel Macron got slapped in the streets.

Like in the US, the mission of the ADC in France is essentially to transport the briefcase permitting the use of nuclear weapons.

In William Shakespeare’s play, Othello, a story is told about man called Iago who is full of contempt for Othello because he hired Michael Cassio over himself. Roderigo, who is sick with love for Desdemona – and paying Iago for aid in pursuing Desdemona – questions him, asking why he does not simply resign from his lower status position, as he is so distraught. Iago’s response is villainous: “I follow him to serve my turn upon him”.

This is the genesis of the love for power in postmodern democracy. Postmodern because democracy is not as new as many would want to think.

Othello does surround himself with elaborate security details despite being the highest-ranking military officer in Venice. He simply has faith in the unseen trust, which can be demonstrated in the plain clothed security details of our modern day and technology.

However, Iago continues to serve Othello out of spite, and the actions that follow throughout the play are driven by this deep hatred of Othello. His first scheme at hurting Othello is to rouse Desdemona’s father, Brabantio, and alert him that Othello and Desdemona have eloped. This incredibly innate belief to-not-serve tells us how closely knit perception is versus reality.

On the other hand, Wole Soyinka's Death and the King’s Horseman play tells the story of Elesin, the king’s horseman, who is expected to commit ritual suicide following the death of the king, but who is distracted from his duty. The story is based on a historical event. In 1946, a royal horseman named Elesin was prevented from committing ritual suicide by the British colonial powers.

The Nigerian playwright alters the historical facts, placing the responsibility for Elesin’s failure squarely on Elesin’s shoulders, so that he might focus on the theme of duty rather than of colonialism. It is this unusual tradition that we must run away from; by design or default.

As a nation, let’s demystify the presidency. Let's make it approachable and human-like, while still keeping the cool-looking security details.

Yiampoy takes over from the Senior Assistant Inspector General of Police Josphat Kirimi.
News
3 months ago

Don't give guards to every candidate

The police should only protect presidential candidates because it does not have the capacity to protect all other candidates before the August 9 ...
Opinion
7 months ago

Presidential candidates to get at least ten body guards

Two officers will man their city and rural homes together with their running mates on a 24-hour basis
News
7 months ago
Post a comment
WATCH: The latest videos from the Star
by NICHOLAS MOKUA
Siasa
21 December 2022 - 17:00
Read The E-Paper