AJUOK: Wanga rebuilding Homa Bay one brick at a time

The governor has assembled a team of real professionals that she leads from the front. 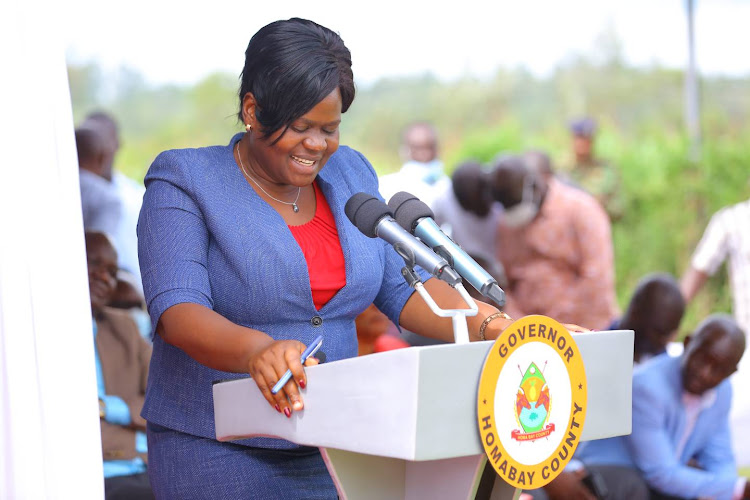 It is a seasonal flamingo migratory site, and one of the most beautiful photography subjects in the entire western Kenya tourism circuit, but which remains largely unexplored and untouched. In the dialect that my people speak, Simbi Nyaima translates roughly to “sunken Simbi”, and you will see why shortly.

Science may tell you about erupting volcanoes and formation of craters, but I guarantee you that if you ask 90 per cent of our village folks, the more believable theory is what our forefathers told us about the origin of Simbi Nyaima, taken straight out of the reservoir of oral folk tales.

The ancient story goes that the village of Simbi had become a base of alcoholism, immorality, arrogance and greed, where the people lived like there was no tomorrow, and values had become alien. In that setting, one evening, a dirty, little old woman popped up in the village looking for food and water but was chased away by the partying villagers.

One woman in the village, however, decided to help her secretly, and took her to her house, where she gave her food and fresh clothes. The elderly woman then asked the lady who had helped her to pack up and get ready to leave, for Simbi village was about to disappear in heavy floods, its ills and immorality gone forever.

If our ancestors are to be believed, the lake today sits on the exact site where all sins of Simbi were sunk in that flood. In a thoroughly patriarchal oral literature tradition, this is one of just a few folk tales from the community with a powerful woman background.

I don’t mean to impute any “Simbi sins” motive on the great people of Homa Bay county, but truth be said, when Governor Gladys Wanga was elected into office in August 2022, she was inheriting a devolved unit that had become the laughing stock of the nation by its disgraceful domestication of incompetence. It didn’t help that those who led the county in the first two terms of devolution perfected the art of gyrating to local Ohangla tunes with raunchy tunes, at the expense of service delivery.

If the county government then had been a village, it would have been easy to draw parallels between its see-no-evil attitudes to that of Simbi Nyaima in old folklore. And like the elderly woman in the story, Wanga’s arrival to save the “village” was initially met with sneers and resistance. Seeking the ODM ticket for the 2022 contest, she was placed against a long list of powerful men, who had money and what in political circles is known only as “ground”.

The story of how she prevailed against all of them will be told another day, but those who work with her say that unlike many politicians, she actually plans things and gets them done. One of my most lasting images of Wanga goes back to November 2017. It was soon after the repeat elections in Kenya and ODM leader Raila Odinga was returning from a short trip in the US. The government sealed off JKIA to prevent Nasa supporters from receiving the former Prime Minister, or indeed accessing the Nairobi CBD as they had intended.

With police laying a barricade outside JKIA to stop politicians entering the airport, Wanga, then the Homa Bay woman representative broke through, and TV images showed her defiantly daring the police to shoot her. You need a touch of this daredevilry and bravery to lead a politically delicate county like the ones in Luoland.

I recently had a chance to visit Homa Bay county, graciously shown around by the acting Homawasco managing director Dan Oketch and the acting Health chief officer, Dr Kevin Osuri, both of them young, vibrant and indefatigable workhorses.

Their enthusiasm to help the governor deliver stood out. Through them, one could feel the positive energy coming from the top. Water is flowing in taps, health systems are getting back on track, essential supplies are on track and the vibe is that the governor’s team is primed for great things.

There is evidence of broad-based consultations with the people as reforms begin to bear fruits. Development partners are coming in to sign MoUs to support projects in key sectors, in an unequivocal show of confidence in the new leadership.

One of my favourites was the advent of cashless services, and what its entrenchment can do to streamlining revenues services and saving on wastage, both to the public and private sectors in the county.

Meanwhile, Governor Wanga has assembled a team of real professionals that she leads from the front, with the real boots-on-the-ground philosophy. A key feature of devolution is that if the boss is firm and principled in their expectations, the workforce picks up that energy.

Like happened at Simbi Nyaima several lifetimes ago, Homa Bay is sinking the incompetence of the past and rising to be with its peers at the high table of devolution success. And you can bet on Governor Wanga to deliver the promise.

Homa Bay is among counties facing serious climate change risks like floods, drought and degradation of soil.
News
2 months ago

She based her argument on experiences in Homa Bay and other Great Lake counties.
News
2 months ago

The law gives the Homa Bay government access to funds for climate change programmes.
Counties
2 months ago
Post a comment
WATCH: The latest videos from the Star
by COLLINS AJUOK Commentator on current affairs
Siasa
21 December 2022 - 17:00
Read The E-Paper