The close ties led to Barbados establishing a High Commission in Nairobi, the first one in Africa

• During Uhuru's tenure, there were increased engagements between Kenya and the Caribbean countries. This was complemented by at least three  top-level visits 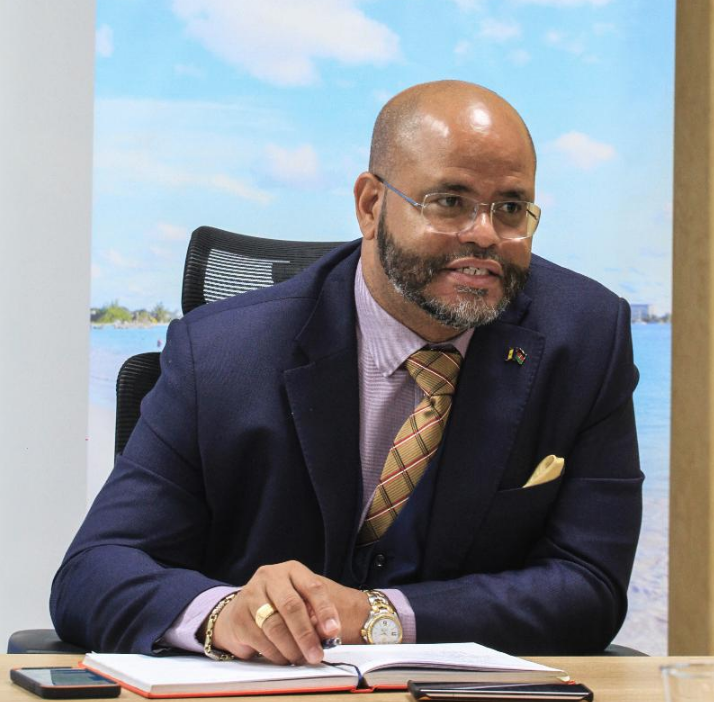 DIPLOMACY: Barbados High Commissioner to Kenya Alexander McDonald during an interview at his office at Two Rivers on November 16, 2022
Image: ENOS TECHE

During President Uhuru Kenyatta’s tenure, there were increased engagements between Kenya and the Caribbean countries.

This was complemented by at least three  top-level visits by President Kenyatta to the Caribbean, including Barbados.

Barbados Prime Minister Mia Amor Mottley reciprocated with a state visit in 2019, where agreements on trade and investment, bilateral Air Service and the International Section of the National Botanical Garden.

During Mottley's visit, the CARICOM office in Nairobi, a joint diplomatic mission for Caribbean countries,was opened.

The close ties led to Barbados establishing a High Commission in Nairobi, the first one in Africa, and posting a resident High Commissioner, Alexander McDonald.

McDonald presented his credentials to President Kenyatta on September 1, 2021. The Star’s Eliud Kibii spoke to the envoy on Wednesday

Maybe we start by introducing yourself and the mission. Who is Alexander McDonald?

Prior to becoming the ambassador, I was the head of the Private Sector Association. I was also the CEO of our Telco company, an entrepreneur and a businessman. Our prime minister is very sure that the foundation of trade development is what is going to sustain relationships.

As with anything the person, is not important. It's the mission that is important.

We have stablished our mission, as you indicated, on the back of a very positive relationship from 2018. With the people of Kenya, our Prime Minister and the then [Kenyan] president formed a relationship based on the common view that the Caribbean and Africa are the same people. We were separated or some people say we're joined by the ocean.

The Caribbean, the American, the Brazilian diaspora, the South Americans are all Africans who were enslaved many hundreds of years ago.

But what really brought that home was Covid. It taught us the Western world put us in a line to wait for our vaccinations. And so through the good graces of Kenya and African community, we were able to accelerate and get our vaccinations quickly. That underscored that together, we are stronger.

The events of the last three years have proven the wisdom of our decision to come to Africa after 50 years of independence to set up our offices in Kenya and in Ghana.

In Kenya not only because it is a hub in the East African community, but also the presence of the United Nations office here. Climate change is very important for us because obviously, we're small island and among the Small Island Developing States states that are heavily affected by climate change.

Now that you mention that, what is your take on the West in terms of taking responsibility for the climate change on the backdrop of COP27?

That change, we feel it first  and are the least offensive. We don't create what we suffer from so in this, it is not justice.

You know Prime Minister Mottley was very vocal about that in Egypt, speaking about lack of justice in terms of the developing countries being the least emitters. But then there is so much pressure on them. 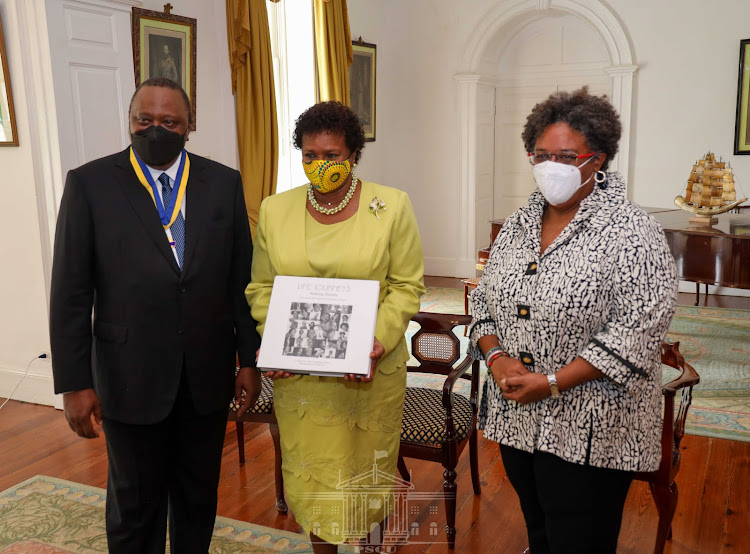 Uhuru was the President-in-Office of the Organization of African Caribbean and Pacific States. How much would you say his foreign policy enhanced the relations between these two countries/ regions?

I'll answer that by saying that as a country, we have always had a mantra in our development: Friends of all, satellites of none.

Barbados and Kenya have had a long-standing relationship, sometimes formally, sometimes informally. I say that because the number of Barbadian young men whose name is Jomo, in honor of the famous Jomo Kenyatta, the founder of the Republic of Kenya, shows and demonstrates that Barbados has always had relations with Kenya.

In the 1940s, at the very start of the pan-African movement in Britain, when Jomo Kenyatta was there, our first prime minister Grantley Adams was also there, and they got together along with many other Caribbean, thinkers and leaders.

At that time, they were students, and they formed this very close relationship that mirrored each other. So, our relationship, desires, partnerships and interest with each other have been formed on the basis of mutual interests.

So, we believe the time was right. President Kenyatta and PM Motley at the time saw that timely, realising we are stronger together. 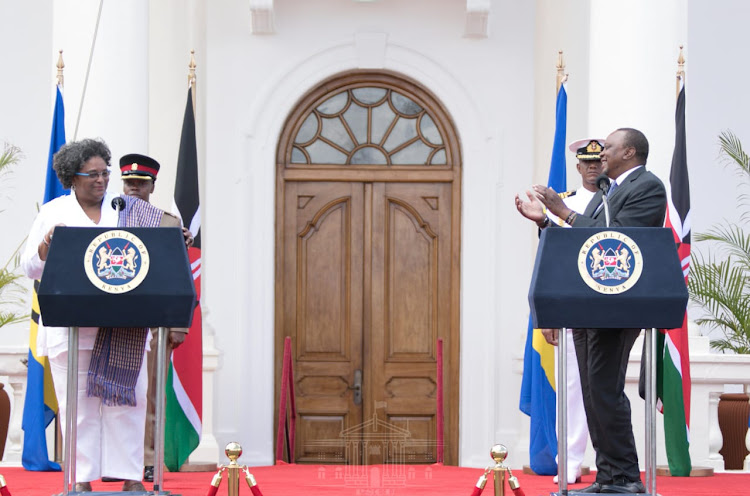 When the Prime Minister visited Kenya, there were discussions on tourism, trade and the blue economy. What are your priorities as a mission in Kenya?

Diplomacy is a strange beast in that our priorities are urgent and important, but the way we go about that has to be in a respectful manner that reflects our growing knowledge of Kenya.

So, we approach it in a way that is genuinely pegged in long-term sustainable partnerships with Kenya and East Africa. We will certainly cooperate on climate change and in the areas that we have mutual interests.

We'd like to understand how we can work with Kenya to get those great lungs that athletes have that allow them to win marathon in record time. That may be genetic, altitude but I don't think we're that far. It may be the training that you go through. We have a wonderful game called road tennis that we can introduce in Kenya.

We are cricket masters and Kenya has a cricket team. We'd like to work with them on that. There's lots of areas of trade that are important. Technical cooperation in manufacturing, design and financial services.

Double taxation treaties, bilateral, treaties and so on, those are things we think we can add value to. And then we have a cultural exchange through the food, the music and the attitude. You have beautiful vacationing spots, we think we have wonderful ones so we can partner in tourism.

Kenya is keen to engage in bilateral, trade and we just had a mission that left yesterday [Tuesday] from Invest Barbados and Export Barbados. We would like to engage with certain technical assistance in the manufacturing areas. We'd like to talk about design, production of clothing and textile. We do lenses, very small, but very high-end lens and glasses and so on. We have our own products that we make, which we would love to introduce you, including rum.

We would like to talk to Kenya about the education system. Kenya is embracing the competency based curriculum and we are looking at that. But we think that if Kenya has done things well, we'd like to pick up on what they did and where they didn't do too well, we'd like to get alerted so that we don't have to make those errors.

We've just had talks between Kenya and Barbados about some of the Life Lessons. Learned the implementation modes and so on. 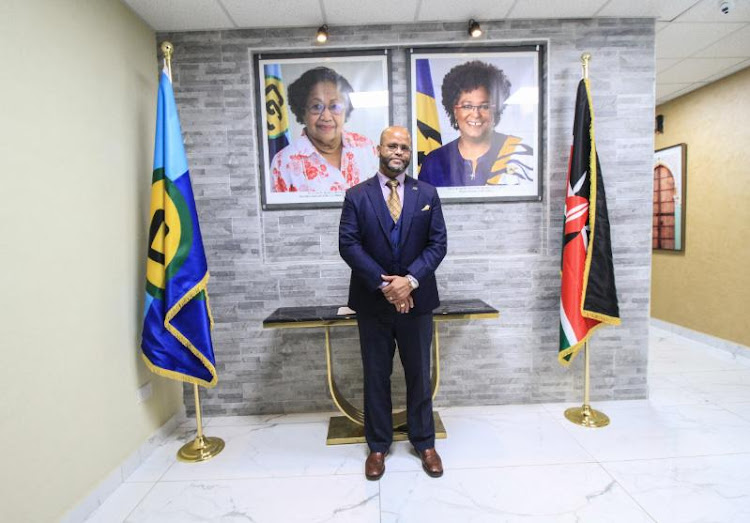 DIPLOMACY: Barbados High Commissioner to Kenya Alexander McDonald after an interview at his office at Two Rivers on November 16, 2022
Image: ENOS CHECHE

You mentioned culture and people to people relations. Have you put in place programmes to enhance cultural diplomacy?

Our governments are working very hard to finally get a direct link from Africa to the Caribbean. Right now, if you want to come from the Caribbean, you have to go through one of the northern countries, either the United States, or Europe, so Britain, France, which is ironic, because people say, no, the journey is so far, the cost is so much. But when they were taking millions of slaves across the ocean, none of those arguments were actually made. They were very easily made without triangular trade. There were no stops, so they didn't take slaves to regroup and then bring them down. They didn't take slaves to America, and then bring them down. They took them direct from West Africa, to the Caribbean.

In our opinion, air links are important but the planes must also be filled with valuable commodities both ways. So, trade is important, but what are we trading?

Yes, culture is important but it has to be underpinned by real good trading relationships with each other.

Kenyan medical students to train in Barbados in Uhuru pact

Kenya and Barbados resolved to work together and enhance their cooperation in renewable energy, tourism.
News
3 years ago

What do you think can be done to add impetus to these relations?

I think the first one is a very good foundation based on trust. The foundations of trust were well established between the African and the Caribbean communities. We have worked together for decades now through the ACP and at the UN.

The second thing is the unification of our voices in the UN voting.

As we go through our candidacies for these important roles and positions, where we can find common ground, we ought to give the support to our colleagues and our friends. That's a very big thing multilaterally knowing we were representing a block of 57 nations.

The CARICOM adding another 15 nations, And then we try to link the with our own other SIDs [Small Island Developing States] and so on. So we start to bring critical mass to any vote.

I think getting together on restructuring the Global Financial systems is also important.

Our prime minister has issued the Bridgestone initiative, seeking to relook at the global  financial arrangements where the poorest countries are asked to take the heaviest burden, not because people are not willing to lend the money not because people are not willing to do all those things, but the terms under, which they are linked and the terms, and the expectations that we have are so onerous that we will never get out of debt.

So, for instance, the drought in Kenya is caused by climate change. Kenya has to find millions and billions of dollars to help relieve the drought by feeding its people. But at what cost?

Every time the Kenya has to do, it has to sacrifice the building of a road, a hospital or a a school. So it has to pay for climate change. It is the same when a hurricane passes through the Caribbean and every couple of years, every Caribbean country has to rebuild.

What is your message to Kenyans?

I want to assure Kenyans that the challenges that Kenya has are our global challenges. Kenya is dealing with them. The problems seem so insurmountable but they'll be solved together. They will be solved collaboratively. Africa has everything that Africa needs to move forward. We are very proud and happy to be here.  We are here because we see a future together.

Rihanna said at the time that she would have been an "enabler" if she had accepted the slot.
Sasa
2 months ago

He said the transition is a testament of the strong resolve by Barbadian people to chart their own destiny.
News
1 year ago

Twelve candidates had been shortlisted for the position.
News
1 year ago

Its the highest State honour conferred on outstanding Barbadian citizens and foreign nationals.
News
1 year ago

Said the voice of the voiceless including the youth should be strengthened.
News
1 year ago
Post a comment
WATCH: The latest videos from the Star
by ELIUD KIBII Subeditor and writer
Siasa
18 November 2022 - 05:00
Read The E-Paper