NYARINGO: How Ruto managed his epic rise to power

Many traps were set up to neuter Ruto’s political star but ended up working to his advantage.

• As 2022 drew near, Ruto managed to bring to his fold former Raila allies such as Musalia Mudavadi, Moses Wetang'ula, Johnson  Muthama, and Dr David Ndii.

″ He stuck himself with these folks, a trait that is devoid in Raila. Critics of Raila argue that he makes friends but doesn’t keep them 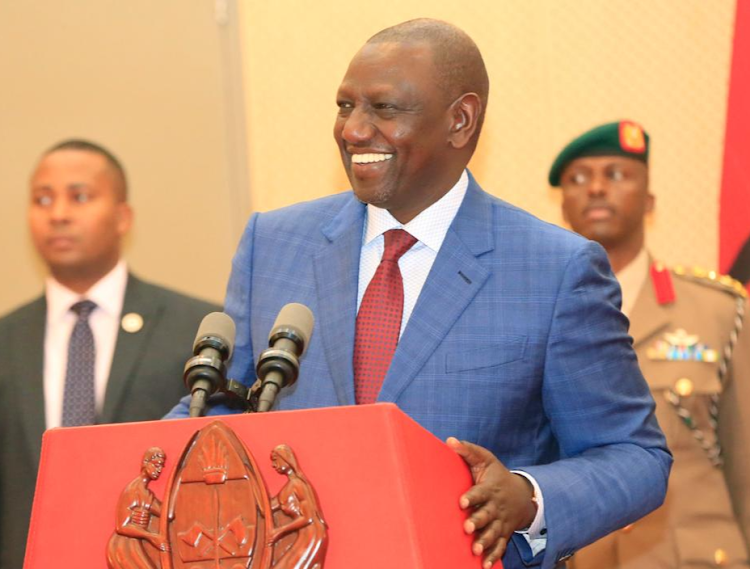 The battle for a country’s presidency is always a torturous endeavour.

The August 9, presidential race pitting the current boss William Ruto and former Prime Minister Raila Odinga was an epic battle whose grand finale was a ruling by the Supreme court in favour of Ruto.

For the ODM leader, who was the main petitioner against Ruto’s victory, the ending was tragic. Suffering presidential defeat albeit controversially for the fifth time isn’t easy to fathom.

Raila's political journey is one compounded with struggle, suffering, pain, and torture.

He went through detention without trial for nine years in his quest for the post-independence emancipation of Kenya.

It’s his suffering for Kenya’s Second Liberation, which has kept the ODM leader at the political apex for many decades.

Upon Raila's release from detention in 1989, he continued agitating for more democratic space in the country during the reign of the late President Daniel Moi.

Ironically, Moi was the current President’s political protégé (mentor) but a political tormentor to Raila

The rise to the helm by the current president cannot be gainsaid.

He began his political journey in 1992 together with other young political actors like Cyrus Jirongo,  Sam Nyamweya, Patrick Musumba and Gerald Bomett, among others where they managed to sneak the late President Moi back to power in the first multiparty election.

However, his career and that of his predecessor, President Uhuru Kenyatta went through a diminuendo when they were indicted at the International Criminal Court at The Hague for crimes against humanity following the 2007 post-election violence.

The indictment ended up as a blessing in disguise. It brought them together in a political marriage.

In a joint presidential ticket under the Jubilee coalition, they rose to victory in the 2013 and 2017 presidential despite rigging allegations contested in the Supreme Court by Raila.

As second in command in the government, Ruto went through a series of humiliations in Jubilee’s second term, which began in 2017.

However, he remained calm and firm. Nevertheless, he told off his tormentors and continued campaigning throughout the country.

After the historic handshake between retired President Kenyatta and Raila in 2018, Ruto hit the road and began connecting with regular folks; thereby building a strong network of political allies.

As 2022 drew near, Ruto managed to bring to his fold former Raila allies such as Musalia Mudavadi, Moses Wetang'ula, Johnson  Muthama, and Dr David Ndii.

He stuck himself with these folks, a trait that is devoid in Raila. Critics of Raila argue that he makes friends but doesn’t keep them.

Many traps were set up to neuter Ruto’s political star but ended up working to his advantage.

For instance, the regressive move to block him from visiting Uganda a few months before the general election spurred his political profile; earning him political sympathy from Kenyans at home and abroad.

The Kenyan diaspora from the US tersely condemned the move, terming it archaic and an impediment towards freedom of speech and assembly.

It created an overconfident attitude from Raila’s supporters, who believed that since President Kenyatta was solidly behind the Azimio candidate, victory was in the offing.

Whilst this was happening, Ruto and his Kenya Kwanza Alliance continued with their aggressive campaign by connecting with voters throughout the country.

Complacency in the Azimio team was quite evident.

His elder brother and current Siaya Senator Oburu Odinga even went public and pronounced that his brother was poised to win the Presidency because the “deep State” (system) was behind him.

This reassurance may have created voters apathy, which affected turnout, especially in Nyanza. Many voters didn’t see the need to vote since it was a foregone conclusion that Raila was winning.

Statistics show a whopping 700,000 voters in Luo Nyanza didn’t turn out to vote on Election Day.

This was a boon for Ruto since this was Raila's political bedrock.

The current president, and his deputy Rigathi Gachagua, have a strong network of religious leaders who played an integral role during the campaign.

Being strong members of the Christian revival movement in the country, First Lady Rachel Ruto and second first lady Dorcas Gachagua were able to build a network of prayer teams in many Churches, which catalyzed voters’ morale and thereby boosting turnout in Ruto’s strongholds, especially in the Rift Valley.

The First Lady’s women empowerment programme through table banking brought in a lot of women to support her husband.

Besides, her humility and connectivity coated with a strong faith in God enabled her to build a solid grassroots network not only amongst women in the country but also inspiring many men to back Ruto’s candidature.

By bringing on board professionals of great repute like Dr Ndii, Eliud Owalo, Barrack Muluka, Ababu Namwamba and Hassan Omar to the campaign, Ruto reflected a shift from some seasoned political leaders who view intelligent figures as a threat in their political journey.

“Ruto is a great giver to the needy. This has endeared him well to the lowly in society; a trait which is alien to many political leaders whom voters describe as stingy and mean. Such leaders only receive but can’t give. Rebecca Machuki, an ardent supporter of Raila, observed.

Many Kenyans who have been closer to Ruto say he always keeps his promises, which is a rare quality in most political leaders.

During the campaign, Ruto promised the Kenyan diaspora that he would create a diaspora ministry to address the challenges facing Kenyans living abroad.

He actually honoured this promise by fusing the foreign affairs docket with diaspora affairs, which will be led by Dr Alfred Mutua.

“Our voices must be heard; our challenges and aspirations must be anchored in the corridors of governance irrespective of where we are domiciled. We will viciously support Ruto’s government. He has shown the diaspora that he cares for their interests," Samuel Cherais, a Kenyan medic living in Atlanta Georgia, says.

Nyaringo is the President of Kenya Patriotic Movement, a diaspora lobby based in the US

Post a comment
WATCH: The latest videos from the Star
by JOSEPH LISTER NYARINGO
Siasa
30 October 2022 - 14:14
Read The E-Paper