Letter to Ndii: Let's step from SGR to US trade deal with eyes wide open

Our Constitution decrees we bargain in the national interest, however powerful our partners are.

• The US has superior bargaining power, but this is no reason to surrender to its power without resistance.

• Our Constitution decrees we bargain in the national interest, however powerful our partners are. 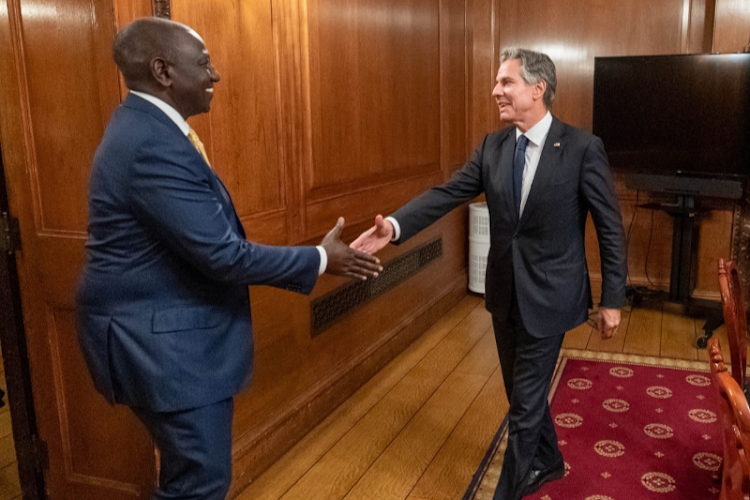 I congratulate you on your appointment by President William Ruto as the chairman of the Economic Advisory Council.

I write to you about a file that will be on the top of your pile in the in-tray when you start working.

It is the United States-Kenya Strategic Trade and Investment Partnership launched on July 14, 2022. According to the Office of the United States Trade Representative, under Docket Number USTR-2022-0008 this is what I have read: “Under this initiative, the two governments will pursue enhanced engagement leading to a high standard in a wide range of areas with a view to increasing investment; promoting sustainable and inclusive economic growth; benefiting workers, consumers, and businesses (including micro-, small-, and medium-sized enterprises (MSMEs); and supporting African regional economic integration.

“As the two governments develop a roadmap for the initial issues under the engagement, the Office of the United States Trade Representative (USTR) is seeking public comments on matters relevant to specified trade areas, including U.S. interests and priorities, in order to develop objectives and positions for enhanced engagement and subsequent negotiation.”

The US government subsequently outlined 12 points of negotiations they will be engaged in with the Kenyan government.

These points include agriculture, anti-corruption, digital trade, environment and climate change action, good regulatory practices, micro—, small-, and medium-sized enterprises, promoting workers’ rights and protections, and supporting the participation of women, youth, and others in the trade.

If you are following the comment line opened by the US Department of Trade I want to draw your attention to one comment: “The US-Kenya STIP agenda includes several policy domains in which Kenya would be required to make concessions from a developmental perspective. Particularly so, if these negotiations are influenced by corporate interests that seek to lock in limits on public interest policies and impose a hands-off approach to regulating the digital economy.

“For instance, in contrast to the United States, Kenya already has enacted privacy and data security policies that would be undermined if a prospective STIP includes the sorts of free-flow-of-data guarantees Big Tech demands and has obtained in some past pacts.”

Others are querying whether this STIP is another push of big tech to tap into the cognitive skills of young Kenyans to use them as cheap labour for the Artificial Intelligence sector of the US economy.

Both of us know how difficult it is to bargain with the US government. The US has superior bargaining power, but this is no reason to surrender to its power without resistance.

Our Constitution decrees we bargain in the national interest, however powerful our partners are. The Constitution also decrees participation of the people, transparency, and accountability.

It would be great for Kenya, if you could, for the first time in our history, mount a team of Kenyan experts comprising the ones in the country and in the diaspora to negotiate in STIP. We know that the US government creates an advisory team of advisers to give advice to them. Will the Kenyan government create a similar advisory team to guide the negotiations?

Needless, to say, Kenya has brilliant economists, trade experts, lawyers, political scientists, and entrepreneurs that can give you a powerful engine to negotiate in the interests of the country. The practice of allowing dimwits to negotiate complex investment agreements, with eyes only on the colour of the dollar, must end.

The engine will need to interrogate the 12 points and address the questions I raise below. I have no doubt you can harness the political will to support such a patriotic endeavour.

I am not an expert on the issue at hand, but let me remind you of the following facts for your consideration and the Advisory Committee I suggest you set up.

Indeed, Kenya's trade with the US is estimated at $321 million, while Kenya’s trade with Uganda alone is $300 million. Among the 12 points for negotiation, include some issues President Ruto addressed in his political campaigns.

The US has done its homework and follows the wisdom of our peasants that if you want to slaughter chickens you must be generous will the grains you pour into their midst, indeed, this a relevant metaphor in the STIP negotiations. There are other observations and questions.

Will STIP undermine the trade and economic interests of Kenya and East Africa? Will the US interests in STIP be antithetical to the goals of economic integration in Africa as outlined in the objectives of the East African Community and the African Continental Free Trade Area? Is STIP not a slight modification of the Free Trade Agreement negotiations between the Trump Administration and the Kenyatta government that started in 2019?

What have we learnt from the Africa Growth and Opportunity process? Will this STIP reset qualitatively what is being traded, or is it simply to export more cut flowers to the US? Will STIP provide for the investments required to strengthen Kenyan entrepreneurs who want to invest in the DRC to manufacture electric vehicle batteries?

The Kenyan government should from the outset of talks be clear about whether tariffs are on the table in the negotiations.

Is it not true that the military relations between the US and Africa are the primary focus of the US foreign policy in Africa? Does Kenya support the new US strategy towards Africa that is speaking of so-called sub-Saharan Africa? Will STIP be the sidebar to get AFRICOM accepted by Kenyans and East Africans? Will our experts be able to lobby Congress about our national interests in STIP negotiations before any law is passed?

Let us step from SGR to STIP with our eyes wide open to our national interests.

Willy Mutunga was the Chief Justice and president of the Supreme Court, from 2011-2016.

Post a comment
WATCH: The latest videos from the Star
by WILLY MUTUNGA
Siasa
30 October 2022 - 07:13
Read The E-Paper