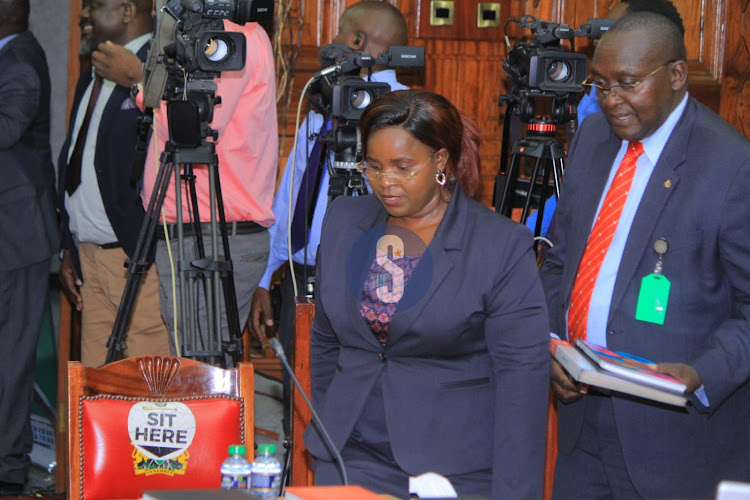 The past one week prompted Kenyans to remain riveted to their electronic gadgets, TV sets, tablets and mobile phones during the vetting of Cabinet nominees.

These live events stemming from Kenya are testimony to the global community that the nation’s parliamentary democracy is growing.

The practice of vetting or confirmation or presidential appointments to the Executive is borrowed from pure presidential systems notably the United States. However, in the US, the Senate which is the Upper House rather than the Congress undertakes the confirmation.

The confirmation process is well expounded by the Partnership for Public Service (PPS) of the US, a  nonpartisan, non-profit organization dedicated to achieving a more effective and innovative government.

According to the PPS the formal confirmation process starts with the President’s signed transmittal of a nomination—one paragraph listing the nominee’s name, home state and position to be filled—to the Senate. Once signed by the President, this document is hand-delivered by the White House clerk to the Senate executive clerk.

The importance of vetting right after a grueling election is best captured in the 1972 dramatic film titled the “The Candidate. In this episode, a dazed US Senator-elect Bill McKay learnt he had won a hard-fought election. The Senator turned to his campaign manager, inquiring, “So … what do we do now?”

This classic fictional scene highlights the real-life difficulty of preparing to govern in the midst of campaigning, and the void created in the event there has been no planning.

Indeed planning aforementioned movies may be an afterthought. However the consequences in reality are serious and sobering.

Just like in the US, France, Kenya and other presidential systems preparing to take over the presidency is highly complex and extremely important. Done well, it will set up a new administration for success but when done poorly; it will make it perplexing for a new administration to recover.

Back in Kenya, according to Article 152 (2) of the Constitution, the President shall nominate and, with the approval of the National Assembly, appoint Cabinet secretaries. The vetting of appointees is, therefore, anchored in the Constitution.

Cursory scrutiny of the public Appointments (Parliamentary Approval) Act states that the National Assembly has 28 days within which through a resolution of the plenary approve or reject the nominees.  The 28 days commence from the date the notification of the nominees was communicated to the members by the speaker.

In the event the 28-day period lapses without approval or rejection of the nominees by the MPs at plenary, the Presidents nominees will be deemed to have been approved by the House for official appointment.

Based on the previous processes and the very recent experience the vetting requires to be reviewed for the following reasons.

First, the composition of the National Assembly Committee on Appointment requires to be reviewed. The majority of members should not be from the ruling party as this is likely to be viewed as an appendage of the very executive being scrutinised.

Second, the speaker and deputy speaker should not be members of this committee leave alone chairing and deputising the same. The current scenario witnessed the speaker and the deputy guiding the nominees on how to navigate questions from the panel. This is akin to a referee guiding players on one side in a competition, thus compromising and predetermining the outcome.

Third, relevant questions should be prepared for the interviewees with a marking scheme and score sheet based on their various portfolios. This is to avoid the panel asking irrelevant questions. For example, how is gun ownership relevant to performance in the Public Service and Gender docket?

Fourth, the committee should have access to independent agencies reports on the nominees from various agencies. These include from the Ethic and Anti-Corruption Commission and the Commission for University Education among others.

Fifth, due to the background of nominee’s majority being politicians, familiarity with colleagues (recall some nominees were sitting MPs) in the vetting panel could not be ruled out hence hampering the impartiality of the process.

Six, borrowing from the analogy of sports, the referees (panel) were easily swayed to be part of players as party loyalties played out.

Seven, as each ministry is unique nominees should be questioned on what they bring on board in their respective dockets.

Eight, whereas this process is matter of great public interest not much input was evident as coming from the community. Going forward why not incorporate the Senate members? Are they not representing the electorate and the general public?

Nine, the reported combined wealth of the nominees is a staggering Sh15 billion. From their high pedestal, how shall they address the ongoing needs of mwananchi.

Ten, the reported political backgrounds of the nominees is no doubt likely to influence the panel towards a favourable report.  Party loyalty is likely to override other considerations, including qualifications, competence and performance.

Eleven, based on the timelines in the Approval Act a likely outcome is that in the event Parliament became lethargic and never acted on the report the nominees would still be deemed to have been approved.

In conclusion, with such prevailing scenarios, though the intentions of the Constitution framers were noble the implementation has proven otherwise. This process has faced intractable challenges that require to be addressed to yield the desired outcomes.

Dr Njau Gitu is an educator practising as a governance and public policy adviser.

OMWENGA: Why vetting of Cabinet nominees is useless

The President will get his way and appoint everyone he nominated as it is unlikely any of them will be rejected.
Siasa
1 month ago

They have raised issues with nomination of Jumwa, Linturi and Kuria.
News
1 month ago

MPs to table in Parliament report on CS vetting

Parliament will thereafter on Wednesday debate on the report
News
1 month ago
Post a comment
WATCH: The latest videos from the Star
by NJAU GITU
Siasa
30 October 2022 - 16:45
Read The E-Paper