• Says China is a willing partner in boosting industrialization, which is among the priority areas for President William Ruto. 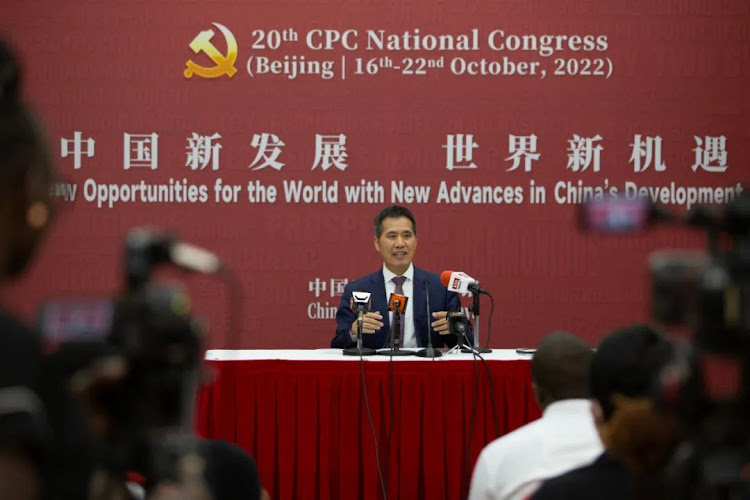 Ambassador Zhou Pingijian during a media briefing at the embassy on Monday, October 24, 2022
Image: HANDOUT

China is not pursuing a surplus trade with Kenya, the country’s ambassador has said.

Speaking to the media in Nairobi on bilateral opportunities following the 20th CPC National Congress on Monday, Ambassador Zhou Pingijian said China is now the largest trading partner to more than 140 countries, including Kenya, which is a natural outcome of market operations.

"The Chinese products are popular and cost effective. We don’t pursue trade surplus with Kenya. We keep encouraging Chinese companies to import from Kenya and other African countries," he said.

The envoy observed that the first batch of 45,000 tonnes of fresh avocados after arriving in Shanghai became very popular among the Chinese customers and got the best price.

"Why? This is about willing buyer and willing seller. Meet the Chinese demand for high quality products and you'll have a ready market.

"We are working with Kenyan friends towards trade facilitation and making trade smooth, which was among our pledges in Focac [Forum on China–Africa Cooperation]," the Ambassador said.

However, available data shows China continues to enjoy the balance of trade, while the trade deficit continues to widen despite a campaign to diversify Kenyan exports.

Data from the Kenya National Bureau of Statistics shows the deficit has widened to Sh425.17 billion in the year through March 2022 from Sh370.58 billion a year ago, representing an increase of a 15 per cent.

This is despite the Integrated National Exports Development and Promotion Strategy being launched in July 2018 to diversify and expand market to Kenya's produce in the 1.4 billion people market.

Kenya made China its top target market destination under the strategy to sell more tea, coffee and horticultural produce.

Ambassador Zhou said China is a willing partner in boosting industrialization, which is among the priority areas for President William Ruto.

"We are encouraging more Chinese investors to expand their business in Kenya to create jobs. We have no problem in addressing the issue and are working towards having more quality products exported to China," he said.

Maintaining Kenya and China enjoy traditional friendly ties, the envoy  said they have confidence that under the leadership of President Ruto and President Xi, the comprehensive strategic cooperation partnership  will get stronger for mutual benefit for our two countries and our people.

"China is the second biggest global economy, which means that our economy is miniscule in comparison.

"However, we should strive to add value to our agricultural exports, which are the mainstay of our economy. While exporting avocados is a step forward, the revenue is negligible as far as balance of trade is concerned," Ndegwa told the Star.

He also observed that Kenya should encourage FDIs that can help move higher in the value supply chain.

Dr Adhere Cavince, an international relations scholar with a focus on China-Africa observes that whenever the discussion around Kenya’s balance of trade with China comes up, it is often based on absolute figures without the context of relative differences in economic capacities of the two countries.

"Secondly, the bulk of the imports’ value from China comprise electrical equipment and machinery, which are critical in building Kenya’s infrastructure capacity; which is key in improving economic competitiveness of the country," he said.

In considering the contribution of different sectors to Kenya’s GDP in 2021, services accounted for 54 per cent, while Agriculture, which is seen as potential offset of the trade imbalance with China, contributed just about 22 per cent.

Among the proposals Cavince proposes to cure the imbalance include, attracting Chinese foreign direct investment that could spur local manufacturing of some products imported from China, ncreasing agricultural produce exports to China and for Kenya to push for entry of more products beyond avocados, coffee and tea.

This he, however, noted would take requisite investments to improve both quality and quantity of produce that Kenya can export to China in a way that beat competition from other countries.

For instance, he said, Egerton University has been working with Nanjing Agricultural University for some decades in doing agricultural research and adaptation together, which has produced a lot of outcomes.

"The other way is the SGR technology. The Chinese team is dwindling because more and more technicians and drivers are Kenyans We are ever ready and willing what we have with our friends through cooperation,: he said.

Political observers are keen to see how the relationship between Kenya and China will be under Ruto.
News
1 month ago

How SGR has changed the fortunes of small towns

Once sleepy, they are cashing in on trade and transport opportunities
News
1 month ago
Post a comment
WATCH: The latest videos from the Star
by ELIUD KIBII Subeditor and writer
Siasa
27 October 2022 - 21:00
Read The E-Paper