KAGWE JP: Kenyans Decide: A vote of protest or solidarity?

• From a statistical analysis that is already underway by this author, this Election was A Vote of Protest in some areas as well as A Vote of Solidarity in others. 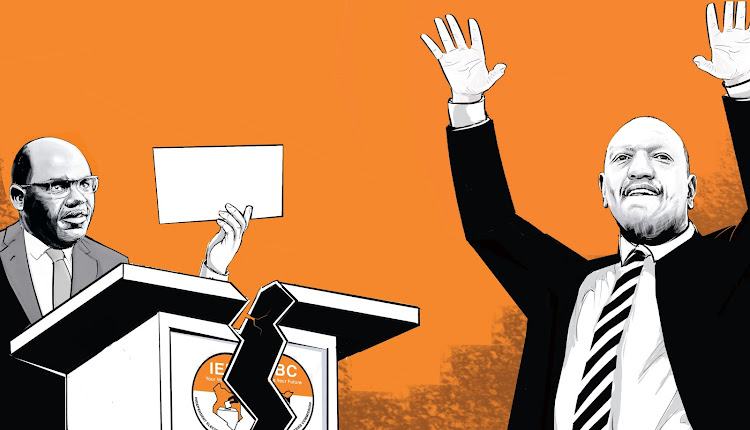 Kenyans trooped to polling stations on August 9 to vote for their leaders.

And on Monday, August 15, the climax of the August 9 General Election arrived when the IEBC chairman declared Deputy President William Ruto as President-elect.

When the so-called Form 34 C was eventually, after six days of waiting, uploaded on the IEBC portal and the declaration made, it was clear that Ruto beat Raila with a slight margin. But having achieved the constitutional threshold, Chebukati only had that choice to make.

From a statistical analysis that is already underway by this author, this Election was A Vote of Protest in some areas as well as A Vote of Solidarity in others.

In Mt Kenya region areas, for example, the electorate was protesting against their own ‘son’ President Uhuru Kenyatta. In Nakuru and many other such counties westwards it was A Vote of Solidarity for either of these candidates. Once ready, this analysis will be shared with a clear conceptual framework that will justify these findings.

Many local, county, national, regional and international observers were witnesses to this general election up to its climax. This article is  by one of those observers and it not only seeks to document the processes and outcomes of the election, but also to point out the real issues that emerged to ensure future advocacy on the same.

This article raises a couple of issues that should concern the observers or even monitors at the national level in the coming days, weeks if not months.

They are democracy and human rights concerns, and hence are targeted to the institutions that deployed observers and monitors countrywide. These are NGOs such as Elections Observation Group, DC-KE, KNIT, ANGAZA, KHRC, IMLU, and many such others.

The concerns should form part of the agenda for these institutions and other stakeholders in electoral processes and outcomes, including constitutional commissions and independent offices that include the IEBC, Ipoa, NPSC, DCI, the Director of Public Prosecutions, ORPP, the Political Parties Disputes Tribunal, the EACC and the National Police Service.

ISSUES FOR ADVOCACY AND ACTION

The first issue is the countrywide low voter turnout, which is about whether there is apathy or fatigue, and has been a subject of discussion.

Second, the economic issues surrounding Kenya towards the August 9 election, and perhaps why we should find a better way of dealing with the voting rather than physical appearances in polling stations.

Third is on the voting itself: There is need to ask what these institutions could do to stem the high tides of rejected votes, since they were either marked wrongly or put in the wrong ballot box or such other reasons.

The question is how and why should that process be so protracted and delayed at the polling station to the national level.

The fifth issue is about the four IEBC commissioners, who were absent from the auditorium citing some tallying challenges, the issues around that and what they mean for the next seven days; perhaps even more since they matter.

The sixth issue would be to discuss the safety and security of not just commissioners and the CEO of the electoral commission that was witnessed at Bomas, but the entire staff during these trying times.

Already, the body of Daniel Musyoka, the returning officer of Embakasi East has since been discovered.  Two other staff have been injured and some arbitrarily arrested and many more intimidated, as chairman Chebukati said.

Security discussions should be inclusive of the counties of Elgeyo Marakwet, Baringo, Samburu, West Pokot, Mandera and others where Kenyans are experiencing flareups every other day.

The eighth matter pertains to how to deal with human rights monitoring and documenting, particularly noting that civil and political rights could be threatened noting such emerging violent scenes in some parts of the country.

Further to these rights, should be about the Article 43 on socio-economic rights, knowing clearly that the economy is depressed courtesy of Covid-19 and massive unemployment across the country.

Perhaps, there should be short-term actions whether contained in the first Executive Order of the new administration or through Bills in the august House.

Further, there is the legal matter of transition, which is based on the Constitution and led by the Assumption of Office Transition Committee.

Ruto cannot be sworn in until Tuesday, August 23, in accordance with the laws, which is seven days after the declaration above. If or when a Petition is filed in the Supreme Court, that means that there will still be 14 days of waiting for its verdict. That verdict determines the transition. Therefore, it should concern all of us about this matter and numbers of days to be counted versus how the Supreme Court pronounces itself.

Related to the above is the tenth matter of the court petitions that expected at the High Court from candidates who lost, which will be heard up to the Court of Appeal level.

Many who lost have said they will file these petitions and hence what would be our role in either being amicus curiae in these petitions or monitoring for documentation of what electoral changes are needed.  This will aid in the preparation of the next electoral calendar, which is what we do in preparation for our Observation and Monitoring.

Beyond this, is the eleventh issue of how to deal with public finance and debt, which is weighing heavily on the country’s economy. Dealing with external and domestic debt, which are mature for payment, and whether there is an opportunity for re-negotiation or re-scheduling of the same debts so that we deal with fixing the living standards.

This is so particularly noting that the leading candidates had expressed the same as a concern yet they made so many promises of what they intend to undertake yet Kenya is flat broke just like its citizens.

Based on the above is the final matter of what advocacy and actions we plan to undertake from all the eleven  issues above: Whether they will be short-term, mid-term and also long-term.

In my opinion, there is need to organize rapidly a planned joint meeting of state and non-state institutions to take stock of what we have witnessed and what we are planning to do jointly so that we approach the post-election Kenya with a concrete focus.

The IEBC chairperson is legally empowered to declare the overall result of the presidential election.
Opinion
1 month ago

Five reasons why 2022 polls are most credible - Chebukati

"The media, observers, candidates and the general public had access to results portal."
News
1 month ago

The number of women elected as governors has increased from three in 2017 to seven in 2022.
News
1 month ago

ELOG had given Ruto 50.7 per cent with a margin of error of +/-2.1 per cent.
News
1 month ago
Why serious candidates lose to crowd-pleasers
Post a comment
WATCH: The latest videos from the Star
by TOM KAGWE, JP
Siasa
21 August 2022 - 16:35
Read The E-Paper