KUOL: Kenyan democracy is not only important for Kenyans but the region too

• Kenyans must also be proud of where their country is and with the spirit of togetherness, they can take it to the next phase of economic prosperity for all

• The last two decades have witnessed a lot of work on infrastructure countrywide, especially on roads, bridges and the modernization of railway transport system 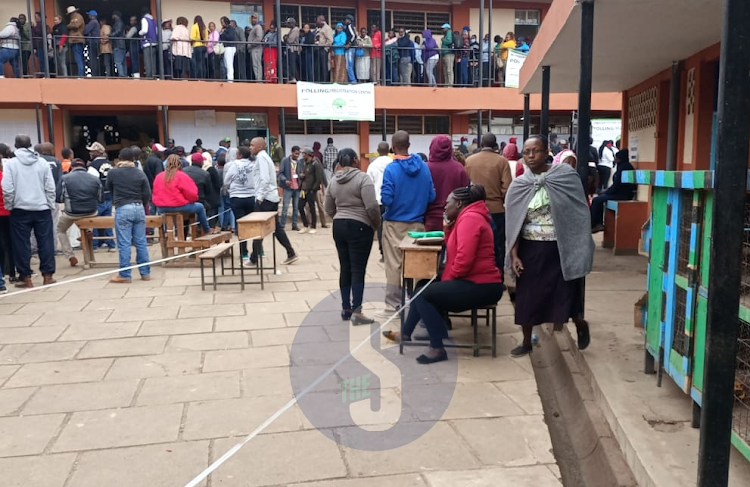 Roysambu Primary School polling station. The station has 14,000 registered voters but the turnout in morning hours was low on August 9, 2022
Image: Sharon Mwende

In this election, Kenyans need to recall how far they have come, the tremendous gains they have made as a result of the two decades of democracy, peace, stability, national cohesion and economic improvement.

Kenyans must also be proud of where their country is and with the spirit of togetherness, they can take it to the next phase of economic prosperity for all by consolidating peace and national unity.

Without doubt, the last two decades have witnessed a lot of work on infrastructure countrywide, especially on roads, bridges and the modernization of railway transport system. This has eased the movement of people and goods across the country and reduced transport costs.

Furthermore, investing in roads and other areas of common concern for the citizens has helped improve the security situation in the country. Sadly, the unemployment rate in Kenya is reported to have increased in the first quarter of 2021 to 6.6 per cent.

In 2019, the World Intellectual Property Organization ranked Kenya the second leading innovation hub in sub-Saharan Africa, and this has opened avenues for the young people to become self-employed and get employed by government institutions, the private sector and NGOs.

All this is as a result of the availability of efficient and reliable internet system with affordable costs. Also, the introduction of the mobile banking system has eased transactions nationally and internationally.

One other important area is health.

Heath services have witnessed a considerable improvement compared to the way they were 20 years ago. So, with peace and stability, basic social services, including water, education opportunities and housing, will continue to improve.

Regionally, Kenya has become an influential country that is playing a major role in bringing peace and stability in the neighbouring states. It is was because of Kenya’s efforts 20 years ago that a comprehensive peace agreement was signed at Nyayo Stadium on January 9, 2005 between the then Government of Sudan and former rebel movement, the Sudan People’s Liberation Movement/Army (SPLM/A), which is the ruling party in South Sudan.

Although the peace talks between the former foes were under the auspices of the Inter-Governmental Authority on Development, Kenya played an instrumental role as the chief mediator was the former Kenyan army chief Gen Lazaros Sumbeiwo. Kenya was the host state.

It is that peace agreement that ended the longest civil war in Africa and stopped the bloodshed between the successive regimes in Khartoum and the then southern-based liberation movements. It is the same CPA that paved the way for the independence of South Sudan.

Kenya’s democracy led to the birth of the progressive 2010 Constitution, which is the guiding star to the Kenyan people to this day.

Kenya has proved beyond doubt to be an attractive place fot expatriates to live and work in. This is because of the conducive environment it provides — peace, stability, availability of reliable and cheap internet, mobile banking and efficient transport systems and good housing. This is apart from its beautiful friendly weather.

As a democratic country, Kenya has managed to forge and continued to strengthened relations with the international community, especially with the most influential countries politically and economically such as the US, the UK, China, EU member states and Japan, just to mention be a few.

Last year, Kenya was elected a non-permanent member of the UN Security Council for the period of 2021-22. And in October last year, Kenya’s Permanent Representative to the United Nations, Ambassador Martin Kimani, became the president of the UN Security Council for the month. This is significant as it shows the country’s influence in the international arena, politically and diplomatically. Kenya is using its position at the UN to push for peace and stability globally.

President Uhuru Kenyatta is also playing an important role to bring about peace in the region. He recently pushed for peace in the Democratic Republic of Congo. As he leaves power, he is expected to continue playing a key role in the region in a different capacity so that the region can enjoy peace and stability.

Kenyan democracy is not only important for Kenyans; it will also help to blow a wind of democracy in the neighbouring countries.

Having mentioned some of the important gains of the two decades of Kenyan democracy, I am not ignorant of the reality of the current inflation, debt and the unemployment that the country is facing.

The good thing is that, a democratic government stands a better chance of dealing with such issues, though this will require more time, patience and understanding from the citizens, when their new elected government assumes office.

Karua's message to Kenyans after casting her vote

She was the first person to cast her vote at Mugumo primary polling station.
News
1 month ago

We've done our part, it's up to Kenyans - Raila

Raila said that he put up a good campaign and hopes Kenyans will cast their votes in his favour.
News
1 month ago

IEBC said the number is exclusive of those identified by the manual register.
News
1 month ago

KABUGI: Why Ruto will emerge winner in Tuesday's polls

Uhuru’s conspicuous involvement in the Raila  campaign is eroding Odinga’s credibility
Siasa
1 month ago
Post a comment
WATCH: The latest videos from the Star
by AKOL MIYEN KUOL
Siasa
09 August 2022 - 21:00
Read The E-Paper