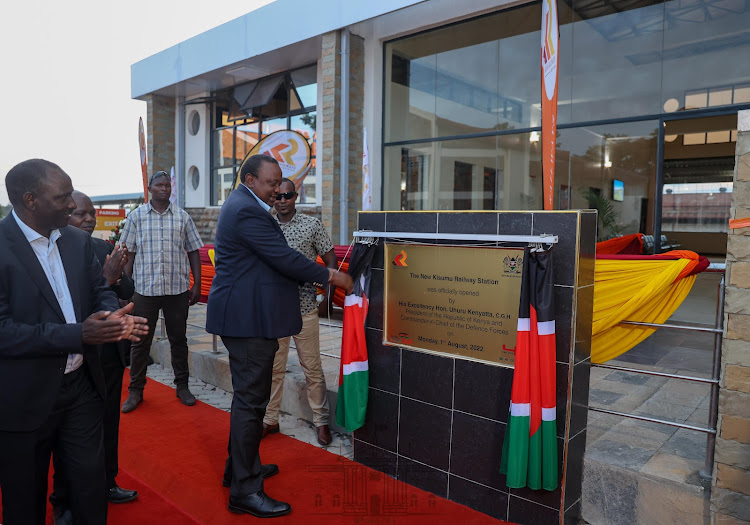 Common to almost all tributes that were paid former President Mwai Kibaki when he died on  April 22, 2022, was the almost consensus that he was the best president thus far in post independent Kenya.

Undeniably, Kibaki was a great President, but as I shall attempt to demonstrate he was not the best; I respectfully dissent. Based on what I shall use as a basis of assessment, I contend that Uhuru Kenyatta is the best thus far.

Let me add readily that in coming to this conclusion, I am not in any way oblivious or naïve to the stark fact of some serious wrongful acts of the UhuRuto Jubilee government and Uhuru’s own individual failings. Corruption and inefficiency have been some of the hallmarks of their government, especially during its first term, 2013- 2017.

These criticisms notwithstanding, Uhuru seems to have grasped what the fundamental problem of contemporary Kenya is and has been since its independence, which is, the nation-building project. On this pertinent issue, Uhuru, during his second term, has surpassed all his predecessors.

Admittedly, the economy is a major issue in Kenya today as it is everywhere in other African states, especially post-Covid pandemic and Ukraine war. So, the fundamental problem of Kenya, I contend, is not the economy per se as currently framed by some politicians; in fact, some are even opportunistic in their populist sentimental approach to the economy.

There is ample evidence to show that any economic development programme that is pursued by post-independent African states outside the nation-building project becomes brittle and crumbles on the slightest political shock. Events of 1996, 2007 and 2017 and others in Kenya, attest to the validity of this contention. The strong economy could have easily burst into flames in the absence of a sense of nationhood.

It appears that the jury has returned a verdict in most African states which suggests that states first seek a nation to which all things, including the economy, shall be added.

On the morrow of political independence, Kenya, like other post-colonial African states, was confronted with the twin challenge of nation building and economic development.

Kenya’s leadership was mindful of this inherited colonial legacy and in 1965 developed a comprehensive national framework to deal with this twin problem.

This was encapsulated in the Sessional Paper no 10 African Socialism and its Application to Planning in Kenya which sought to address the economic development and nation building project question.

Comparatively, Kenya has done very well on the economic front possibly as envisioned by the sessional paper and what my friend David Ndii, styles critiques as ‘development fundamentalism’. Even before Kibaki took office in 2002 and later in the coalition government with Rt Hon Raila Odinga, in 2008, Kenya had already registered high marks on the question of economic development.

However, the question of nation building, the performance to this date is abysmal; Kenya is a strong a state, but a weak nation- state. In fact, the original sin of Kenya was Uthamakism, which as a chauvinistic ideology, nipped the nation building project in the bud. Specifically, the first president mzee Jomo Kenyatta, presided over a Kenyan state which was ethnicised and perceived by many as discriminatory in favour of mainly elites of the Mt Kenya region, GEMA, in terms of land allocation, resettlement patterns, access to capital and credit and appointments to public offices.

When President Moi succeeded mzee Kenyatta in 1978, the nation-building project was not on his radar; rather there was an agenda of ‘de-Kikuyunization’ of the state and replacement of Kikuyu chauvinism with Kalenjin chauvinism. For about 24 years, Kenyans witnessed a much more primitive form of accumulation and in a much more chaotic manner by the Kalenjin political elites as some of these elites thought it was time to graze the Kenyan greener pastures and leave it to fallow on its own.

Urged on by domestic and global factors, in the 1990s, the nationalists regrouped and challenged Moi’s government for re-introduction of multi partyism which became nationalist agenda to accommodate the diverse nationalities within the polity.

The protracted nationalist agitation resulted in a repeal of the constitution thereby allowing for multi-party elections that resulted in the ascendancy of a formidable nationalists’ coalition in 2002. This presented Kibaki with the best opportunity as a Kikuyu to have ended the uthamakist hegemonic politics when he was elected in 2002. However, contrary to expectation, Kenya came close to re-inventing the ethnic chauvinism of the previous regimes and discarded nation-building project barely two years into his administration.

This elicited deep resentment from the various communities. Enter the elections of 2007, led by Raila and the concept of Pentagon as a national movement to get back at the nation state agenda. All communities who felt excluded came together under Raila's leadership to fight back and won in all senses.

However, to keep the state together, Raila made concessions, and agreed to a coalition government with shared executive power amongst different communities of the country. To many political commentators, this marked the finest period of the pursuit of economic development that intersected with the nation state project; there was a sense of belonging, equity accountability and yet basic needs attended to.

State project and the handshake

Uhuru, came across as having carefully read and understood very well what the agitations of 2007, 2017 and others were really about; principally they were resistance by excluded majority of Kenyan communities and persons who wanted their legitimate share in the political economy of the country.

Thus, a collective quest for nation building which Raila personified became the dominant sentiment on the political firmament. In fact, properly looked at, 2017 presented Kenya with a more serious challenge yet of its existence as a state as communities within it wanted to break away with secession becoming part of the political discourse of the grievance of the overwhelming majority.

Consequently, Uhuru’s reaching out to Raila to resurrect the abandoned nation state project was a heroic gesture of putting nation above self and personal power. The immediate manifestation was the handshake symbolising an intention to unite the country, followed with a 10-point agenda that was essentially about national unity and equitable distribution of resources for all groups.

To further demonstrate his commitment to the nation state project, Uhuru is on record stating that political power in Kenya should never be confined to only two communities within the polity, the Kikuyu and Kalenjin; all others should have access, hence his own role in contributing to the crafting of a coalition of a political party that represents almost all the communities in the country, the Azimio La Umoja one Kenya Coalition.

In pursuit of the nation state project, Uhuru is prepared to forego the parochial “tribesmen” and friends, who cannot see the bigger picture. In a recent meeting at State House with some of these tribesmen, he told them how great it is to do business when there is a sense of fellowship and belonging by all and reminded the meeting of the dangers of business in the absence of sense of common nation hood. This is the future of Kenya and that is Azimio.

When asked by a school pupil what he wants to leave as his legacy when he hands over power, his answer was that he wanted to leave a united nation.

That is why on the nation building project, which Kenya is fundamental problem, Uhuru is the best President thus far.

Nana K. A. Busia, Jr is a senior research fellow and guest lecturer of

A Charter defines the governance of a University including powers to award degrees.
InPictures
2 months ago