• This ruling is a follow up to the Court’s main ruling in 2017 which acknowledged the Ogiek as the customary owners of the Mau Forest. 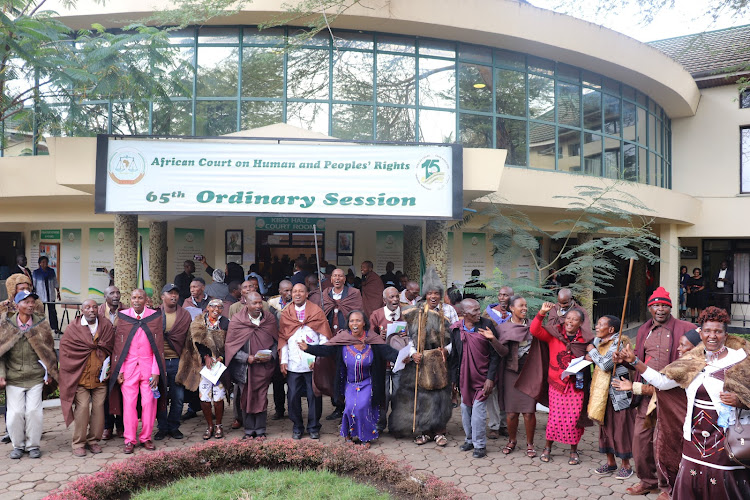 HOPE: Members of Ogiek community celebrate the African Court on Human and Peoples’ Rights’ judgment in their favour in Arusha, Tanzania, on June 23
Image: OGIEK PEOPLES

The African Court of Human and Peoples’ Rights has put itself even more firmly on the map in its judgment of June 23, 2022.

The judgment concerned the right of the Mau Ogiek to have what little is left of their ancestral lands in the forested Mau Escarpment recognised as their property.

The area concerned is much of the Mau Forest, though one third of the Ogiek area as it was 120 years ago, a blink of the eye in their historical possession over thousands of years.

The loss of this land since 1902 began with allocation of significant areas to white settlers, then to their workers, followed by even greater allocations to non-Ogiek settlers since 1963, including to one President and numerous other politicians and civil servants.

In 2009, Prime Minister Raila Odinga reported to Parliament that a further one quarter of the Mau Forest had been lost since 1994 through irregular settlement schemes, sustained illegal logging and encroachment, and expanding group ranches in Mau Narok.

This ruling is a follow up to the Court’s main ruling in 2017, which acknowledged the Ogiek as the customary owners of the Mau Forest. It held that the Kenyan government had violated the African Charter on Human and Peoples’ Rights in various ways. It pointedly observed the Ogiek were not themselves to blame for the losses of their ancestral forests, also a major loss to Kenya.

The June 2022 court ruling, and the preceding hearings, were concerned with how to implement the 2017 decision.

Government insisted it alone could own and manage the forest and, aside from launching a plan to allocate some farming parcels to Ogiek, claimed granting rights of access and use would be sufficient.

In contrast, the Ogiek laid out a roadmap, prioritising restitution. Each community making up the Ogiek people should be granted collective title. They were willing for these titles to be non-transferable (‘inalienable’), to ensure the properties could be passed on intact from generation to generation. They offered to agree with the Forest Service on limited settlement and farming areas with no right to expand these along with population.

All forest still existing in each community property would be declared protected community forests. The Forest Service could lease plantations from the community in whose property these fell. The Ogiek expected the Kenya Forest Service in return to assist them to be effective managers and especially, to help them keep out unlawful encroachers and loggers. In particular, the government should finally relocate the many non-Ogiek settlers unlawfully or irregularly allocated Ogiek land along with encroachers.

Between 2017 and 2022 were marked by sustained unlawful encroachments, logging and suppression of Ogiek rights, alongside a failure to consult them as ordered. An expensive task force over several years to plan limited land allocation to Ogiek had not even been shared with the Ogiek. By 2021 , Ogiek had returned to the High Court obtaining an order stopping government action, still in force until the new hearings.

The African Court reacted with barely concealed irritation to government’s objections to restitution, dismissing them as lacking merit. Did the government need reminding that it already had the legal instruments in place to provide meaningful remedies for the Ogiek?

Despite the careful wording in its 56-page judgment, one can hear the court asking itself if the government had forgotten that its landmark people’s Constitution in 2010 already lists one sub-class of community lands as “ancestral lands and lands traditionally owned by hunter-gatherers”?.

It observed that Kenya’s Community Land Act provides procedures for issue of collective title, including in customary tenure, opening the way for special incidents and caveats to be crafted as required. Even the Forest Conservation and Management Act already provides for Community Forests for purposes of protection and sustainable use.

Moreover, if the law does not precisely fit, it is up to duty bearers “… to attune their legal systems to accommodate indigenous peoples’ rights to property such as land”.

The Court ordered the Kenyan State to use its law, ensure the Ogiek’s right to land is delivered within one year through physical delineation, demarcation and collective titling of their ancestral land as covering all 21 Forest Blocks. “…Granting indigenous people privileges such as mere access to land is inadequate to protect their rights to land”.

In addition, where Ogiek lands are subject to concessions or leases to non-Ogiek and other private individuals or corporations, the State “must commence dialogue and consultations to reach agreement on whether these holders can be allowed to continue their operations by way of lease and/or royalty and benefit-sharing with the Ogiek in line with the Community Land Act”.

Should compromise prove impossible, “[Kenya] must either compensate the concerned third parties and return the land to the Ogiek or agree on appropriate compensation for the Ogiek”.

The Court also reminded the government that it is a “… basic requirement of international human rights law that indigenous people, like the Ogiek, be consulted in all decisions and actions that affect their lives”. This includes their right “to give or withhold their free, prior and informed consent, with regards to development, conservation or investment projects on Ogiek ancestral land”.

Finally, the Court took the unusual step of awarding Ogiek not only monetary compensation for material losses but also a significant sum to compensate for ‘moral prejudice’.

This refers to intangible losses of cultural, spiritual and psychological well-being caused by State failures to prevent discrimination, to respect their right to practise their way of life, or to be consulted as above.

The immediate implication for Mau-Ogiek and their fellow four other indigenous forest peoples in Kenya is clear enough. Restitution is a right, even where the concerned land is a Protected Area (like a gazetted forest).

Restitution need not signal the end of conservation but a new and people-based beginning, in which the state regulator and oversight authority for forest protection assists the community owner to meet needs.

Fortunately, as shown globally, the demand of indigenous peoples for intact forest coincides with state demands for the same. It is time to work with this reality.

Neither the Kenyan government nor other African governments can continue to hide behind the outdated position that only they can safely own and manage protected areas.

There is plenty of precedent for governments to look to, where national parks and reserves are successfully owned by local communities, and at scale by indigenous peoples from Canada to Brazil to Australia and the Philippines, from Papua New Guinea to Romania and Portugal. Neither this nor the issue of collective title as inalienable are new developments.

However, the Court administered the needed wake-up call, to move beyond the old and clearly unsatisfactory mode of conservation. Nor, frankly, without such modernising steps, engaging and supporting communities such as indigenous peoples as owner-conservators, will Kenya or any other African state overcome continuing loss of forest cover in protected areas, let alone achieve their urgently needed multiplication to mitigate climate change. Empowering communities with secure ownership on conditions agreed with them is the essential way forward.

While the Ogiek and other indigenous peoples in Kenya are celebrating the Court’s decision, they are also aware that they have a duty as the front-runners in this needed shift of resource governance in Africa to set a working precedent for others to follow.

The outstanding question is how far the government of Kenya will make this possible. One or two National Land Commissioners are already on the case, seeing the need and opportunity for Kenya to lead the way along a people-based path to forest conservation and protected areas. Star readers should keep their eyes open on this.

The government and the Ogiek have only one year to report significant progress to the African Court.

The author is an independent land tenure specialist and associate of Katiba Institute.

Daniel Kobei says despite the land mark win five years ago, the problems they faced have not ended
News
2 months ago

Ogiek quest to occupy forest is to marry many wives, court told

The community is laying claim on Mt Elgon arguing that the government erred in evicting them.
Counties
10 months ago

Kenya's Ogiek people are optimistic of returning to their ancestral forests as the government has pledged to honour a landmark ruling ...
News
4 years ago
by LIZ ALDEN WILY
Siasa
10 July 2022 - 09:19