PATEL: India considers deporting its Rohingya refugees back to Myanmar

• While most of the refugees have fled to Bangladesh some have managed to reach India, but are facing difficulties getting entry and refuge there.

• This is ironic because Indians for most of Burmese history, suffered bigotry for their ethnicity and in the 1930s were expelled in large numbers from Burma 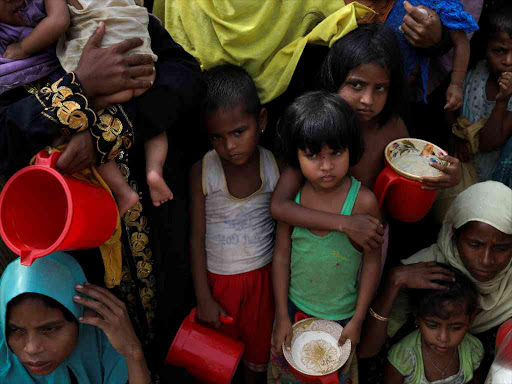 An expulsion from its homeland of an entire community or group in itself smacks of injustice as there is no way in which an entire society can be tarred with the same brush.

And expelling them from their homeland is equivalent to robbing them of their birthright. And yet, distressingly, this most inhuman practice condemned by most right-thinking citizens, and antithetical to international law, continues to be resorted to by authoritarian and dictatorial governments and leaders.

This year is also the 50th anniversary of the expulsion of the Ugandan Asians from their homeland. Perpetrated with the excuse of ‘righting a wrong’, the wrong committed results in great emotional pain, physical hardship, disruption and loss of relatives, friends and workmates. This leads to a disorientation that can become permanent. Loss of life and serious injury are also possible outcomes.

I am referring to the genocide and expulsion of the Rohingya people from Myanmar. While most of the refugees have fled to Bangladesh some have managed to reach India, but are facing difficulties getting entry and refuge there. This is ironic because Indians for most of Burmese history, suffered bigotry for their ethnicity and in the 1930s were expelled in large numbers from Burma (as Myanmar was known then) back to India.

Allowing Rohingya refugees to stay in India would lead to ‘social unrest’ in the country, the government of India states. So now, their ancestral homeland is rejecting them too! The United Nations has affirmed that: ‘they are among the most persecuted people in the world’.

The Rohingya are a largely Muslim minority who have lived for centuries on the west coast of Myanmar and have an etymological link to the Rakhine and Arakan.

The earliest Burmese Indians migrated to Burma in AD 1044-1287 when Indian, Persian and Arabian merchants came to Burma. Islam came to the region with 8th century Arab traders, and the presence of Muslims in medieval Arakan is well documented; there is some evidence that Brahmanic people from Bengal may have established an ancient kingdom named Vaishali in north Arakan long before then.

Settled in Rakhine State, Myanmar’s least developed region, with more than 78 per cent of households living below the poverty line, the Rohingyas are ethnically, religiously and culturally different from the mainstream Tibeto-Burman people. Brown skinned and with Bengali features, the Burmese who strangely consider themselves ‘white’ refer to them as ‘kala’, a word which literally means ‘dark, disgusting and inferior’.

Having won the first Anglo-Burmese War in 1826, the British set about annexing parts of Burma to add to their Indian Empire and at that time large numbers of Indians streamed into Burma.

By 1931, the Indians made up seven per cent of Burma’s population. They were also extremely prosperous, controlled large parts of the economy and even served in the Cabinet. They owned so much property that, for example, during the 1930s, they paid 55 per cent of the municipal taxes in Rangoon – the capital of British Burma.

The local Burmese, on the other hand, paid only 11 per cent. It must be noted that this unequal development was encouraged by Britan’s notorious divide-and-rule policy.

This situation, which was replicated in other parts of Burma, evoked much bitterness amongst the Burmese who now targeted the Indians racially. The animosity was fuelled further by religious differences, Buddhism being the official religion in Myanmar.

In 1941, the Japanese attacked Burma during World War II and the British began to withdraw. The Indians, fearing attacks from both the Japanese as well as the local Burmese, embarked on a major exodus trekking all the way back to India with many dying on the way. The Rohingya, however, stayed on in their ethnic enclave.

In 1948, Burma gained independence from the British, and the xenophobia increased as the newly independent state defined itself in racial terms. This was further accentuated in 1962 when the military took over control of Burma. Dictator Ne Win followed an aggressive racial policy which affected every minority group; Burmese citizenship was now based, not on birth, but on race.

In 1982, Burma passed a controversial law that stripped persons of Indian origin, including the Rohingya whom they identified as Bengali, of their citizenship rendering them stateless. As of now, it is estimated that 500,000 people of Indian origin living in Myanmar are stateless. A subtle form of ‘ethnic cleansing’ was instituted.

The military government designed policies to force the non-indigenous communities to adopt Burmese language, religion and culture. Hoping to lessen the hostility the PIOs have ‘Burmanised’ themselves.

Indian languages have been replaced by the Burmese language, even names have been Burmanised yet the  antagonism continues. For example, Hindus and Muslims of Indian origin are not allowed any public celebration of their religions and face racism. The Burmese people believe the ‘Kala Lumyo’ will take over the country and rule Burma, and that their children will have to convert from Buddhism.

The Rohingya and the Burmese Indians, as well as other non-Burmese ethnic communities, are victims of the same racism practiced by the junta and imbibed by the Burmese population at large.

The Rohingya Muslims, however, are the most unpopular in Myanmar and are the most egregiously brutalised. The UN human rights chief, Zeid Raad Al Hussein, termed their situation as ‘a textbook example of ethnic cleansing’.

In 2017, a small group of Rohingyas took up arms against the state; the junta and the compliant civilian government led by Aung San Su Kyi has used this as an excuse to unleash genocide. To date, more than 300,000 Rohingyas have fled the Rakhine state to seek refuge largely in Bangladesh.

A few have made their way to India but, rather than taking up the cause of the dispossessed, the Indian government is considering pushing the few Rohingya migrants that have taken shelter in India back to Myanmar – where they would face genocide. The excuse is that India is not a signatory to the Refugee Convention.

The UNHCR has issued identity cards to about 16,500 Rohingya in India, nevertheless, in August 2017 the Minister of State for Home Affairs, Kiren Rijiju, insisted that the Rohingya were ‘illegal immigrants’ and that ‘all illegal foreign nationals including Rohingyas’ would be deported. However, the principle of not sending refugees back to a place where they face danger is a part of international law and is binding on all nations, even those which have not signed the Refugee Convention.

Considerations of class as well as the intervention of foreign powers seem to play a decisive role in other global expulsion cases. The Rohingya, being largely working class or lumpen, pose no economic threat nor are they a source of envy to the Burmese people. They are, however, a focus of quite intense hatred. It seems they are a very convenient scapegoat being used by the junta to deflect the citizens from their struggle for democracy in Myanmar.

Malaysia, Indonesia, Thailand, Pakistan and Saudi Arabia are hosting Rohingya refugees but the so-called ‘developed’ world has shown no desire to ‘assist’ the Rohingya. And Bangladesh, where most of the Rohingya are fleeing to, is anxious to see them return to Myanmar – this, however, will not be possible until the junta is overthrown and a truly democratic government takes power.

Meanwhile returning the Rohingya refugees to Myanmar at the present time is, without any doubt whatsoever, to condemn them to genocide.

Any assurances to the contrary given by the Myanmar Junta, which refers to them as ‘illegal immigrants’ cannot be relied upon. To date no repatriation has taken place, it is to be hoped that this apprehension will persist.

More than 1,500 people have been killed by security forces since the coup in February 2021.
News
4 months ago

The armed outfit has denied the allegations.
News
8 months ago

Millions hunker down in India, Bangladesh as cyclone arrives

The coronavirus has made mass evacuations more difficult.
News
2 years ago
by ZARINA PATEL
Siasa
22 May 2022 - 06:25