Kibaki: Friend of those in need, to many Ugandans a friend indeed

Kibaki, financial technocrat and MP at age 31 in early post-Independence Kenya, was to climb the social ladder with numerous rounds of golf and super connections

• I was a wide-eyed first year student at Makerere, and we were at the Muthaiga Golf Club in Nairobi when my father shook me and said: “There is Mwai Kibaki”.

• Kibaki was then Kenya’s Vice President and Minister for Home Affairs and, latterly, of Finance, 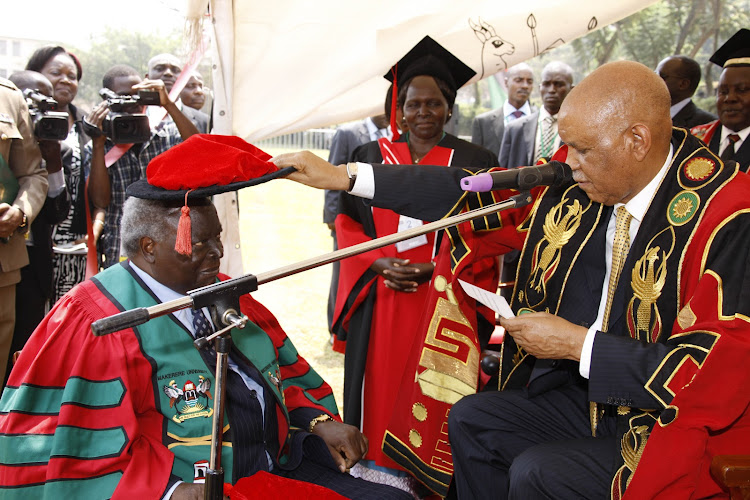 Mwai Kibaki was just the second big name African that I encountered.

Like the first one, President Idi Amin in my primary school in Uganda, this one was also hefty of build, towering above others and carrying his fame and office with an ease that belied the clichéd African Big Man.

I was a wide-eyed first year university student at Makerere, and we were in the lounge at the Muthaiga Golf Club in Nairobi when my father shook me and said: “There is Mwai Kibaki”.

This was 1985. Uganda was in a fair amount of chaos, and Nairobi was always a welcome break, to get away from the gun violence and bloodletting as well as to restock with scarce consumer goods.

Kibaki was then Kenya’s Vice President and Minister for Home Affairs and, latterly, of Finance, a portfolio that singularly aroused the awe and envy of a Ugandan youngster fresh from the mire of a dysfunctional economy back home. That afternoon, Kibaki strode by us, the spikes of his golf shoes crunching away on the polished wooden planks of Muthaiga, the weekend retreat of Kenya’s high and mighty.

My dad, Daniel Nkata, had probably enjoyed a round or two of golf with Kibaki sometime previously, the gulf in their social class notwithstanding. This time though, in my company, it would be a curt acknowledgement, and my youthful enthusiasm was instantly doused, having to make do with that fleeting introduction.

The occasion was not a quiet weekend where a few aficionados would have the expanse of the Muthaiga to themselves. It was the Kenya Golf Open, and the fairways were abuzz with scores of pro and amateur golfers, fans, sponsors and international media (for the Kenya Open was then part of the European Tour, with big prize money and many points to collect for the overseas pros).

Part of the pull that attracted me there, or rather the hook that Dad used to persuade me along, was the presence of elite golfers such as Ian Woosnam and Sandy Lyle.

And so I did not get to press the man’s flesh, and optimistic though I was, there was never any other opportunity to see or meet Kibaki, even on two or three subsequent visits to Muthaiga.

The golf bug bit Nkata and Kibaki at round about the same time.

Born six months apart in 1931, the two had probably crossed paths two decades hence, at Makerere, where my father spent 1951-53 training at the Kampala Technical School situated then at eastern end of the campus, where the University Police Station is today, and the young Kenyan student sojourning a couple of hundred metres away, in New Hall from 1951 to 1955. But it is the golf that brought them together.

After scoring his First Class Honours degree in Economics, and teaching briefly at Makerere, Kibaki returned to Kenya, plunging immediately into the high-end of social life and becoming a well-respected technocrat.

A key stepping stone for establishing oneself then, even as now, was to worm one’s way among those that matter, and which better place than on the golf fairway? Kibaki, financial technocrat and MP at age 31 in early post-Independence Kenya, was to climb the social ladder with numerous rounds of golf and super connections. And there he was to remain, a lifelong golf buff, most notably as the longest serving patron of the Kenya Golf Union.

Running in near-parallel the other side of the border, by the time I was born, Nkata had, in June 1964, become the first indigenous Ugandan to gain formal membership of a golf club in a sport, nay social setting, then overwhelmingly dominated by expatriates and retiring colonial officers.

His career high was, arguably, the few rounds he played at St. Andrew’s, the home of golf, in Scotland, in 1980 as he attended the World Golf Congress with his great buddy, Engineer Zak Muwanga (another Makerere KTS graduate of the class of 1951-53).

By 1980 Nkata was secretary of the Uganda Golf Union, with Muwanga serving as chairman.

At Makerere, Kibaki had been roommates with another Ugandan who would also score a historical first. Born in 1924, Andrew Adimola came to Makerere as a slightly mature student in 1952 and fate would land him in the same room as a 20-year old Kenyan undergraduate. Whatever it was on the walls of that room or in the water they drank in New Hall, it should be preserved.

Emilio Stanley Mwai Kibaki had come all the way from Nyumba ya Mumbi, the people of Kikuyu in Central Kenya, weaned off the herding of his grandfather’s goats, and plunged into modern education at Makerere via the not inconsiderable excellence of one of Kenya’s oldest schools, Nyeri High (founded in 1907).

On the Ugandan side, Andrew Benedicto Adimola was a bright young man out of Lacor, Gulu, and the two roommates put their heads together, so to speak, and went on to shine as students. Kibaki’s First Class Honours degree, the first from Makerere’s Faculty of Economics and Management, has been well spoken of.

Less known, but equally laudable, was Adimola’s pursuits in History and Geography, where he received an award for the best Arts student in the entire college of Arts and Humanities.

Adimola’s first claim to fame was to come round about the time Kibaki was plunging into his country Kenya’s Independence politics. In Uganda, self-government was granted in March 1962, and Prime Minister Benedicto Kiwanuka set about constructing an administration to prepare the country for full Independence.

Adimola climbed through the ranks, initially as student counsellor for Education at the Uganda High Commission, and then as Permanent Secretary at Foreign Affairs and then Animal Industry under Milton Obote, before crossing to the Ministry of Education.

It is in the last role that he would run into trouble with President Idi Amin, in 1974, when he declined to give a disproportionate quota to a certain group of students in Makerere’s enrolment. His, daughter Beatrice, remembers the shock, as library prefect at Gayaza High School, when she collected the newspapers, and saw the front page story that “Andrew Adimola retired in the public interest”.

In 1970s Uganda, that was usually a euphemism for a death sentence, made all the more perilous when one was of the Acholi tribe, Amin’s perceived nemesis. Adimola hastened to Nairobi, where his old roommate, Kibaki, then an established Cabinet minister, helped him settle among the refugee crowd.

Beatrice would make it to the University of Nairobi in 1976, and it was at the Annual Public Lecture where Kibaki was guest speaker that she gets introduced to him. The poet Okot p’Bitek, another great son of Acholi exiled in Kenya, would get a hold of Beatrice’s hand and drag her along to the reception and tell the Cabinet minister, “This is your roommate Adimola’s daughter”.

A second-year student, Beatrice remembers an affable Kibaki disarming her with a calm and respectful demeanour.

By the time Adimola himself became a Cabinet minister, named to the Reconstruction and Rehabilitation portfolio in the first post-Amin administration of President Yusuf Kironde Lule in 1979, in Nairobi Kibaki had been appointed Vice President by Daniel Moi.

Professor Josephat Karanja, who as Vice Chancellor, had helped secure the exiled young Beatrice Adimola a place at the University of Nairobi four years earlier, would eventually replace Kibaki as VP. Karanja also had his own Ugandan story, being married to a Mutooro lady, Beatrice, from the Nyindombi family of Fort Portal.

The writer is former editor-in-chief of the New Vision and former executive director of the Daily Monitor in Kampala.

Kibaki's Mass unsettled when an man claiming to be his grandson approached the pulpit.
News
4 months ago

KARIUKI: Ruto is right, Kibaki is greatest president we've ever had

To my delight, the Deputy President doubled down in Othaya by calling Kibaki the father of modern Kenya
Siasa
4 months ago
Post a comment
WATCH: The latest videos from the Star
by DAVID SSEPPUUYA
Siasa
17 May 2022 - 12:00
Read The E-Paper