• This election could herald a new dawn for Somalia ever since the formation of the Transitional Federal Government led by president Abdullahi Yusuf Ahmed 2004-08.

• The official candidates, who had registered by the Tuesday May 10 deadline, were 39 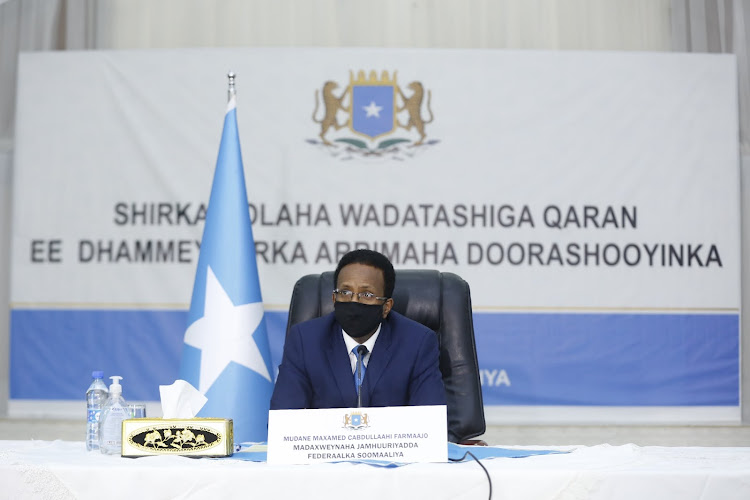 On Sunday, May 15, Somalia presidential elections will finally take place.

This follows the announcement of the election date by the Presidential Election Committee led by the Prime Minister Mohamed Hussein Roble after numerous hurdles, including insecurity and deaths of sitting MPs and aspirants.

The election coincides with the anniversary of the Somali Youth League, the first Somali political party, established back in 1943.

Besides addressing the spiral of insecurity brought by al Shabaab terror group, the election will also be decided on finalising the constitution, strengthening government institutions, reconstructing the economy and restoring law and order.

Undeniably, the resurgence of the terror group, which has caused death and mayhem in the country, is one of the key issues that will shape this election. The group recently attacked a base run by Amisom, now renamed African Union Transition Mission in Somalia, in El Baraf area of Middle Shabelle.

This election could herald a new dawn for Somalia ever since the formation of the Transitional Federal Government led by president Abdullahi Yusuf Ahmed 2004-08.

The official candidates, who had registered by the Tuesday May 10 deadline, were 39. They are all focused on getting the highest seat after paying the requisite fee of $40,000, to be on the ballot. It is highest number of presidential candidates ever recorded in Somalia’s history.

The only female candidate on the ballot is Fowsiyo Yusuf Haji Aden, a former minister of Foreign Affairs and deputy prime minister during the former administration. It is the first time a female candidate is running for the highest office in Somalia, breaking the barrier of the male-dominated society, even if her chances are next to impossible. It is a candidature worth watching.

However, it does not mean the chances of a new-comer snatching the elections is not possible, as happened in 2012 with former president Hassan Sheikh Mohamud. Typically, Somalis are known for ushering in a new candidate with no tainted and terrifying history to lead the country.

The race to occupy Villa Somalia, the seat of power, will definitely not be an easy feat as many candidates are now lobbying to sway the public through social media. Hassan Sheikh Mohamoud is leading the nominees ahead of President Farmaajo by few votes, followed by Sheikh Ahmed and Deni respectively, according to opinion polls. All these can change by Election Day.

Chances for President Farmaajo to be re-elected are on shaky grounds after some of his allies lost crucial seats in Parliament. As a result, the opposition team seems to have an advantage after managing to win the elections of both speakers in the lower and upper houses. They are Sheikh Aden Madobe and Abdi Hashi respectively.

Unfortunately, Somalia’s current political power structure is built on the 4.5 clan model in which, the four largest clans share the majority of parliamentary seats, while the minor clans get half. Ever since its adoption, the dominant clans have been elected to the highest positions — president and prime minister.

Speaker of the Lower House Madobe issued a directive and stated that ATMIS forces will be responsible of the security of the election venue and ordered the current Somali forces to temporarily relocate.

The international community and it is partners have urged all Somali leaders to finalize the electoral process peacefully in order save the country from al Shabaab group and continue with the rebuilding efforts, as well as address the drought

As the 329 MPs and senators gather at the Aden Abdulle airport hangar on Sunday to pick the next president for the country for the next four years, they will have to think deep on who is the best candidate to move the country forward.

He is facing at least 40 contenders in the race for Villa Somalia, the seat of power in Mogadishu
News
4 weeks ago

Only a few thousand people vote for a parliament that would represent the nation of around 16.3 million.
News
1 month ago

Somalia's newly elected MPs set to be sworn in

They will be sworn in at a venue inside the main airport area - one of the highly guarded areas in the capital.
News
1 month ago

Somali president hits back at PM on envoy's expulsion