OMWENGA: Raila’s US visit was a smashing success

As president, Raila promised to deliver on his economic vision and eradicate or at least radically escalate the war against corruption.

• Even without completing his tour as initially planned, the shortened trip was a smashing success in every measure.

• He addressed an enthusiastic crowd of Azimio supporters who came out in large numbers surpassing any previous record of attendance for such events. 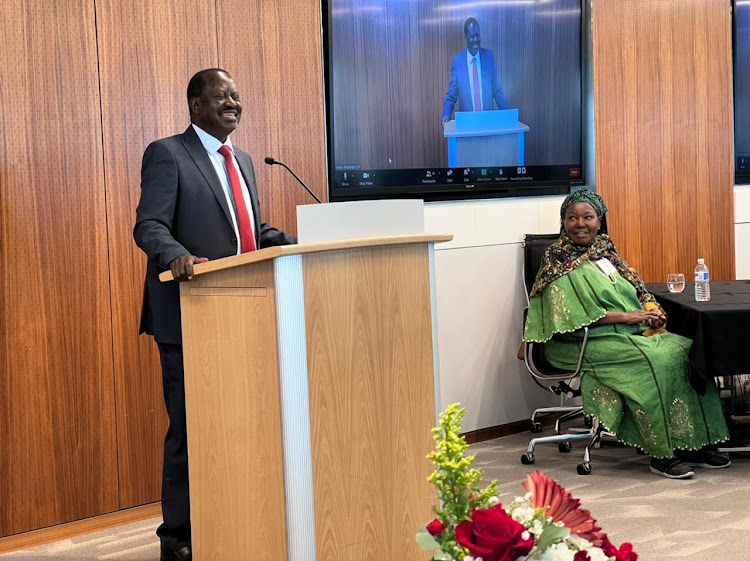 Azimio presidential candidate Raila Odinga in the US.
Image: RAILA/TWITTER

But even without completing his tour as initially planned, the shortened trip was a smashing success in every measure.

He addressed an enthusiastic crowd of Azimio supporters who came out in large numbers surpassing any previous record of attendance for such events. Raila, who was accompanied by two governors and several MPs, rallied the crowd but also castigated them for not registering to vote.

Only less than 1,000 Kenyans registered as voters, which is an abysmal number given the tens of thousands of Kenyans in the US.

“Shame on you,” Raila admonished, while rejecting the various reasons given for the poor registration, including time and inconvenience.

It was a well-deserved rebuke, but Raila also knows and said as much even though most of these Kenyans living in the US did not register to vote, they speak to relatives back home and can influence their vote.

Raila then went on to explain his vision for the country, if elected president on August 9. Of great importance to Kenyans living in the US, Raila promised to push for the establishment of a diaspora affairs office at the cabinet level.

It is a great vision but one likely to be resisted by those who see no need to have a full-time Cabinet Secretary whose job is to solely deal with diaspora issues. Rather, their position is there should be a Diaspora Desk at his office led by someone who not only understands diaspora issues, but also one who knows how to make this happen in the government system.

Raila established an office for diaspora affairs when he was prime minister and had someone from the diaspora head it. However, not much is known about what that office did.

Deputy President William Ruto copied Raila and appointed a certain hacker to head his version of the diaspora affairs office, but he is known more about hacking and propaganda than anything to do with diaspora issues.

However, given the firmness and resolve with which Raila spoke about diaspora issues, those living in abroad can rest assured their issues will be finally addressed when Raila is sworn as the next president.

Raila spoke about his vision to transform Kenya economically, something he has been yearning to do and a major part of his messaging since he has been vying for the presidency but not given the opportunity to implement his vision.

We saw a sneak peek of that when Raila was prime minister, even though he was being frustrated by many within the government who did not wish to see him succeed as that would have benefitted him politically.

As president, Raila promised to deliver on his economic vision and eradicate or at least radically escalate the war against corruption.

After addressing the jubilant crowd of Kenyans at the town hall meeting on Sunday, Raila met with key players from corporate America. He told these business leaders about investment opportunities in Kenya and what his government will do to attract more foreign direct investment.

When Raila was not busy meeting with top administration, legislative and business leaders, he made time to address thought leaders at critical Washington DC think tanks, including the Atlantic Council and the Centre for Global Development.

Raila’s trip though shorted accomplished its purpose and affirms why the man stands alone in terms of his connections internationally compared to the novice who has yet to learn international diplomacy, let alone having the connections Raila has to implement his vision for development of our country.

The former PM left the country on Friday for a week-long trip of the US.
News
4 weeks ago

Raila left for a one-week long visit to the US in the company of his entourage.
News
1 month ago

During the visit, Raila is expected to meet and greet Kenyans living in the US
Siasa
4 weeks ago
by SAM OMWENGA Legal Analyst and Political Commentator
Siasa
04 May 2022 - 13:00