Otuoma: I refused to participate in cutting child into two, it's now back to owner

ODM governor nominee speaks about his journey, the intrigues and his plan for Busia 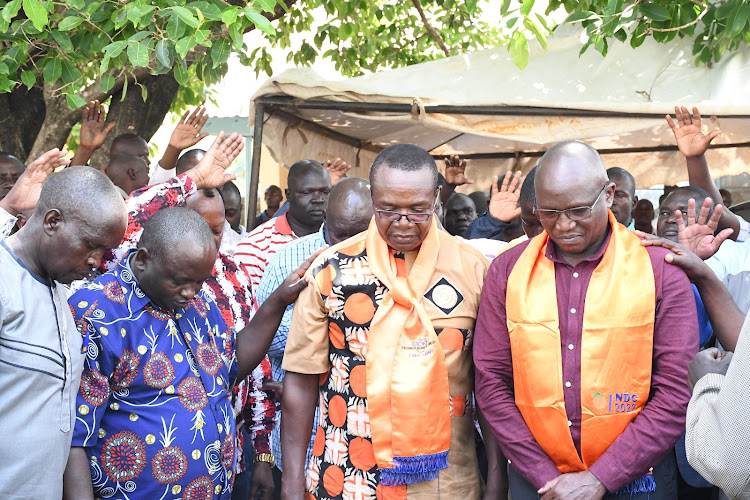 For former Cabinet Minister Paul Otuoma, it has been a long journey full of surprises, shocks and sacrifices since he set his eyes on Busia governorship.

The former Funyula MP, who served in President Mwai Kibaki's administration, has unsuccessfully vied for the seat twice — 2013 and 2017.

In 2017, he ditched ODM to challenge outgoing Governor Sospeter Ojaamong on an independent ticket after losing in the nominations, a process he claimed was flawed. Ojaamong garnered 92,358 votes against Otuoma's 63,752 votes.

Otuoma, 55, was this time lucky in the nominations after beating his sole challenger, Woman Representative Florence Mutua.

In an exclusive interview with the Star, the ODM governor nominee speaks about his journey, the intrigues and his plan for Busia, one of the counties considered among the poorest in the country.

It has been a long journey, what do you think worked for you this time round?

The person who was in charge of the task force that looked into the weaknesses of ODM nominations, Dr Catherine Mumma, was put in the national elections board and they deployed technology to do away with the sham things we saw the other time.

And  you heard even the party chairman say that the Busia outcome was more or less a reflection of the opinion polls.

And I think if non members would have been allowed to vote the way we used to do universal suffrage, then definitely the figures would have been a reflection of the main election outcome. But there was a limitation because a lot of people who assumed they were party members did not find their numbers.

What would you consider to be your lowest moment in your political career?

Remember I talked about the Solomonic judgment that sometimes when some people wanted to cut the child into two, the owner said 'let them have it'.

That's what we did because we didn't want to jeopardise the bigger picture of supporting Raila's presidential bid and that's why we went independent.

I'm also aware that sometimes the people we employ, your employees, can do some damage depending on whether they are working in the best interest of the institution or not..

And since we did not participate in killing the child, at the end of the day it has come back to the owner.

A number of aspirants in ODM have questioned the credibility of the recently adopted computer-aided nomination. Do you think it is a game changer ?

Technology, if applied properly, is a game changer because to vote, you only clicked on the iPad and left instead of these things we see when people run away with ballot boxes.

And even where there are no boxes, somebody would say we have these results from this area, somebody has gotten 90,000 votes as it happened last time without any verification. Those are the kinds of things that were causing a lot of dissatisfaction.

There were a lot of talks before the nominations that the party was having a soft spot for your rival and that there were chances of you being shortchanged. Were you bothered?

I was not bothered but you must realise that politics is not just about an individual. You have supporters, a team that is working for you in all these things.  We are also students of history and we have come from a very bad history in terms of party nominations. So that was causing a lot of concern.

But the National Election Board kept on reassuring us that the process would be overboard.

If you look at the history, you can see this process has set a positive pace unlike the other one.

From your experience, do you think digital technology could be manipulated to favour certain candidates?

I think that can best be answered by NEB but from what they explained to us, it can only pick one ID number.  So anybody who tried to move from one station to another and try to vote couldn't.

Finally, they told us that when the results are tallied it only picks one [vote per voter]. I tend to believe that was what happened.

If you happen to eventually succeed the outgoing governor, what do you think needs to be fixed in the county? What will you prioritize?

I think we have to appreciate whatever the outgoing office has done and maybe the people themselves feel satisfied that they have been able to get the services they require. But what we know is that we need to fix our health system, our infrastructure, access to water and agriculture, which needs a quick fix.

We are among the top 10 poor counties and that tells you we have a lot of work to do, if we are to achieve what devolution envisaged.

Instead of poverty reducing, our poverty index has gone up because we used to be in the 50s and 60s percentage quantum. You're talking about 70 per cent of the people perceived to be poor living below the United Nation standard in terms of the human development index.

Using all these factors such as clean water, access to healthcare and education, ability to pay bills and buy things that you need, you realise we have performed very badly.

Just like in Africa when we were getting independence, some countries made quite some strides in improving the lives of their people. Some didn't do very well. We used to have water for all, healthcare for all, education for all and you find sometimes those things are not achieved.

In our case, it is also very clear  we still face the three enemies, which are basically poverty, ignorance and disease, 60 years down the line.

That means we have got a lot of work to do and that is why we were agitating for devolution so that people can participate and decide on their own priority areas in terms of what they want to develop. 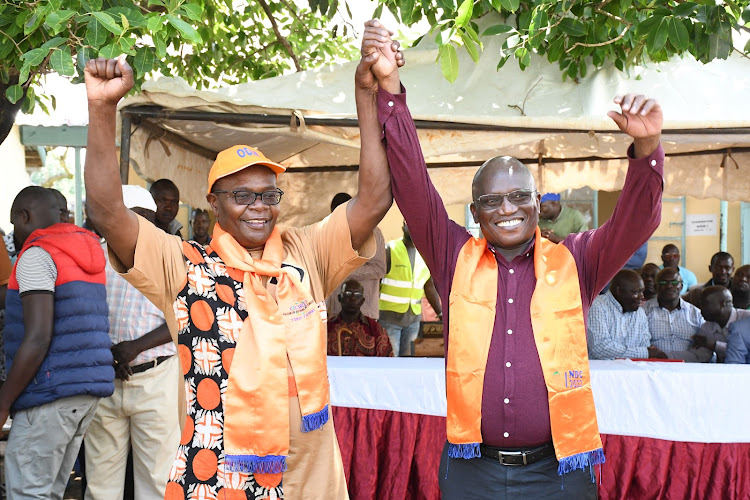 DEAL DONE: Otuoma and Odera at Achiya Echakara Secondary School on April 4, after agreeing to work together ahead of August polls.
Image: EMOJONG OSERE

How different will Busia be in your 100 days in office?

I am going to constitute or streamline and put in place institutions that will carry out functions that deliver services to the people.

First, we have to streamline the institutions we have and the way we do things.

I come from a school of thought that if you can't measure it, you can't achieve it. So we will be going in there and saying if we are supposed to be providing health services to the people and we are not doing it, what is the problem? Why is there no medicine in our hospitals?

If we are going to say we want to improve agriculture, why is it that we have good programmes, especially some NGO-funded initiatives, that are yielding fruits but those supported by the counties are not?

When we talk about planning our town properly, we have to make sure we have good drainage systems and plan properly.

So the first thing is to make sure we build up institutional capacity so that those institutions can serve the people and that's what I intend to do within the first 100 days.

There will be accountability to the citizens in terms of what we are supposed to be delivering to them as a county government.

When we talk about public participation, it will not just be about an advertisement in the newspaper. It comes with certain responsibility because those are constitutional requirements.

If you are supposed to be running budget-based programmes, why are we ending up with the kind of issues that counties are ending up with pending bills? People are not being paid for services provided.

While at that, the issue of pending bills has been persistent in government ministries and county governments. How do you intend to deal with this?

Why did it change when Kibaki came into power? We had that problem.

But when the Narc government came to power, one of the priority areas was to get rid of that and it unlocked a lot of capital within the business community.

That made many business investments thrive, many job opportunities were realized  and our economy grew at a rate that was never witnessed before.

Those are the issues that certain policy issues contribute to because when you have pending bills, you are basically sucking resources away from the citizens and the economy. You also create an avenue for corruption.

Do you think Busia county –ranked amongst the poorest – is a sleeping giant?

I can say Busia has not really benefited from the full potential of what devolution can do. Even from the first impression when you go to the town, the CBD is still mad roads..

But to me, the best measure of success of devolution is to see the human development index going up because that's the correct measure that people are getting services and their lives are improving.

So it's not a surprise to me that we are being ranked [among] the most poor county because you can see our Human Development Index has stagnated or has gone down.

You go to parts of Teso North  and people don't have water, women and children are fetching water using jerrycans. If water cannot be a priority area, then what is the priority?

A child is denied education because of lack of school fees when there have been efforts to provide children with education by MPs building infrastructure of schools — because that's not a devolved function — but enough bursaries are not issued.

When you see that the revenue collection by the now-defunct Busia county council was higher 10 years ago than under Busia county government, that automatically tells you something is wrong.

If you allow the county assembly to go into bed with the executive, then it means that institution cannot work because the role of the assembly in terms of representation, oversight, and legislation is compromised.

Do the county employees have any reason to worry with you on the steering wheel?

I've told them repeatedly that if you're a public servant, you are employed under your terms of employment under the rule of law. Your employer is the County Service Board and there are rules and regulations.

We politicians, who come in as temporary government, are policy makers and we want the civil service to implement those policies. So you only have problems when you're not serving the government of the day in terms of the manifesto that they want to implement.

But if you're doing your work as a civil servant and properly trained, then you know how to behave even when there's a regime change.

Again, it shows you we have quite a bit of a literate community. The only thing we need is to help them to fight poverty and this is what I'm going to do.

He won the ticket after beating his sole challenger, woman rep Mutua in nominations
Counties
1 month ago