A popular initiative was for the people. That is what the word popular means

• For the Swiss, popular initiatives do not come from parliament or the government, but from the people. They are a cornerstone of direct democracy.

• For us, too, the popular initiative is one of the measures to make the peoples’ sovereignty a reality. 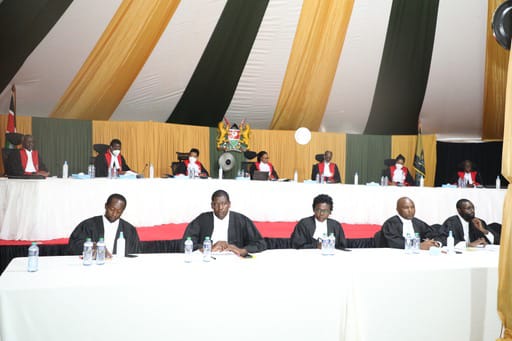 A cartoon recently implied that the courts threw out the baby with the bathwater – the good substance with the procedure.

It is important to understand that when reviewing decisions of public institutions, courts are more often concerned not with whether they like or don’t like the decisions made but with how the decisions were made.

A case like this – where the country is split down the middle about whether the BBI recommendations were desirable or not - shows precisely why it is often not a good idea for the courts to base their ruling on the actual decision, rather than the process of reaching the decision.

This issue – whether the President could introduce a change to the Constitution through the popular initiative – was about the process.

It seemed odd that Raila Odinga and President Kenyatta should choose to use that procedure when they could have simply organised to have the constitutional amendment Bill taken straight to Parliament.

I also wondered how MPs felt about this procedure that prevented them from doing anything other than say Yes or No to the Bill. I put it down to Raila’s attachment to the idea of a referendum (he nostalgically recalling his triumph in 2005 when the so-called Wako draft constitution was defeated) as well as his preference for the politically dramatic. Somehow going straight to Parliament would not have seemed the same reggae!

WHAT DOES THE CONSTITUTION SAY?

“An amendment to this Constitution may be proposed by a popular initiative signed by at least one million registered voters.”

If the IEBC says there are at least one million valid signatures, the proposal goes to the counties. If more than half vote in favour, it goes to Parliament. If Parliament approves, it becomes law (the President must sign) unless it is necessary to have a referendum on the issues.

But if Parliament votes “No”, it goes to the people in a referendum on the whole thing. And if the people vote “Yes” it becomes law.

The question the courts had to decide about the BBI was whether the President could sponsor a popular initiative.

WHERE DID THE IDEA COME FROM?

When a new idea comes into our law, knowing what the idea means and where it has been used before helps us to understand it.

A major inspiration for our provision is the Swiss popular initiative. The Swiss Federal Government advises people how they can proceed.

They say, “Popular initiatives do not come from parliament or the government, but from the people. They are a cornerstone of direct democracy.”

For us, too, the popular initiative is one of the measures to make the peoples’ sovereignty a reality.

The Constitution says that when it is interpreted by the courts or anyone else, this should be done in a way that “promotes its purposes, values and principles”.

The majority of the court was doing that. A popular initiative was for the people. That is what the word popular means.

Justice Njoki Ndung’u took a different view. She wanted to know what precise bit - even what precise words - of the Constitution had been violated. And she said the initiative did not begin until it was sent with one million signatures to the IEBC. The signatures made it “popular”.

Even taking her approach, I suggest she may not be right.

She also accepted that to deprive the President of the right to begin such an initiative was to take away his fundamental right – of political action under Article 38.

The other judges said this was wrong – in this case you could not separate the President from the person. Again I think the majority was right. The whole dynamic of a situation in which an idea is floated by the President (whether he does it as “Mr Uhuru Muigai Kenyatta” or not) is very different from when an ordinary citizen does it – even if public money is not spent on it.

This judge and Justice Isaac Lenaola agreed on one other issue: That the President did not in fact sponsor this proposal (the BBI Bill). This was done by MPs Dennis Waweru and Junet Mohammed. With respect (as lawyers usually say when disagreeing with a judge) this skates over the realities and would open the way to sanitising an initiative begun by someone without the power to do so.

The other judges here looked at the realities of the situation – where had the push really come from?

In fact the majority said the President cannot personally introduce any constitutional change, even directly to Parliament. One reason for this was that at the end of a constitutional amendment process, the President has to sign, but also must refuse to do so until there has been a referendum, if Article 255 requires this.

Can he do this with honesty, if the proposal is one he sponsored in the first place? As Justice Ouko said, the President can’t run with the hare and hunt with hounds.

We do not need to feel “Oh the poor President. He can’t introduce any change to the Constitution.”

The President is the head of government. In our system, Parliament is elected at the same time as the President and he will have a substantial body of supporters in Parliament, if not a majority.

In the same way as the Cabinet’s proposals to change the law get before Parliament, a proposal to change the Constitution suggested by the President could be introduced by a committee, or by an individual, including by the leader of the majority party (which usually would be the president’s party). I am not sure that there is any way to prevent the president raising issues he wants in these ways.

If the President does not have any supporters in Parliament, it is almost certain that efforts will be made to impeach him. Technically, our Constitution says he can only be impeached and removed if he is guilty of gross misconduct or violation of the Constitution or law. But this would not prevent MPs trying.

One can then imagine that the President would love to have a way in which he could get help against Parliament. Imagine the President trying to get the provisions on impeachment in the Constitution changed. If the President could start a popular initiative and get enough signatures, he would drag in the IEBC and the counties to his battle with Parliament.

The situation might be less dramatic – not involving impeachment. But the popular initiative if usable by the President could involve his being able to overrule Parliament in a way that involved one million signatures (maybe from his own community) the IEBC and  24 counties.

It is hard to imagine that the Constitution drafters envisaged the popular initiative would be used in this way. The Constitution sets up a system that is designed to work through cooperation of the various elements in government, not of confrontation.

As the Supreme Court said in an early Advisory Opinion, “lawful public-agency conduct under Kenya’s Constitution, requires every State agent to grapple, in good faith, with assigned obligations, and with a clear commitment to inter-agency harmony and co-operation.”

The last thing we want - and I believe the drafters wanted – is a mechanism to encourage a standoff between president and Parliament such as we are seeing in Tunisia today.

Finally, as Justice Lenaola said, we do need a law on the popular initiative procedure under Article 257.

How it is started, how many ideas may be shoehorned into one Bill, how the IEBC confirms the signatures, what the county assemblies are supposed to do when they consider the proposal all need clarification.

The DP wants those found culpable held personally liable for misuse and wastage of public funds.
News
1 month ago

Says reggae has stopped and we must move the country to the next level.
News
1 month ago