• For the umpteenth time, Somalia failed to meet its own set extended presidential election deadline on March 15, which was pushed from February 25.

• A video of uniformed men burning a civilian alive in western Ethiopia sparked widespread outrage, further demonstrating the level of human rights abuses in the country. 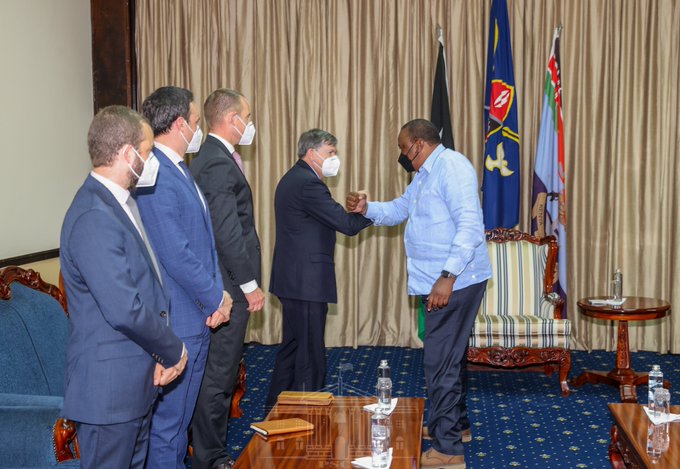 President Uhuru Kenyatta and the US Special Envoy for the Horn of Africa Amb David Satterfield at a meeting at State House, Nairobi on Monday.
Image: PSCU

The unfolding situations in Somalia, Ethiopia and the Horn of Africa will further worsen the security and democracy in the region, experts warn.

For the umpteenth time, Somalia failed to meet its own set extended presidential election deadline on March 15, which was pushed from February 25.

This is because parliamentary elections are yet to be completed.

In the indirect system, delegates are to vote for 275 MPs for the Lower House while state legislatures elect senators for the Upper House, a process that has now been completed.

At the centre of the controversy is the dispute over the federal parliamentary election in Garbaharay, Gedo region.

Some aspirants have demanded that the election centre be moved to Kismayu, citing insecurity posed by al Shabaab and influence by President Mohamed Farmaajo.

Regional experts speaking at the Horn Dialogue Centre warn that the delayed polls are creating uncertainty in the country and are detrimental to governance.

Already, differences between President Farmaajo and Prime Minister Mohamed Roble, who is leading the election process, have played out in the open.

Farmaajo’s term ended constitutionally on February 8, 2021, and the electoral impasse is raising questions about his legitimacy.

Already, opposition leaders have termed his leadership illegal and unconstitutional.

There is international pressure on the political leadership to reach consensus following a series of talks and consultative meetings between the federal government and the federal member states.

There were protests in Mogadishu in February 2021 and a split on the security agencies, heightening tensions in Somalia and the region.

Security expert Tabby Mwangi said the situation is also giving fodder to terror group al Shabaab, which has demonstrated resilience in the recent past. Terror attacks have also increased.

Mwangi added that the legitimacy question due to the divide in government is also providing fodder to al Shabaab.

Mid-February, at least five people were killed and 16 others injured when al Shabaab attacked a police checkpoint in Mogadishu.

On Thursday, Somalia local media reported four Turks were wounded in an IED explosion claimed by al Shabaab in Hodan district of Mogadishu.

The UN and other international observers have warned that the militants will take advantage of the election crisis to launch more attacks.

The African Union has also pointed to an increase in attacks, which are linked to the elections.

AU special representative for Somalia and head of the AU Mission in Somalia Francisco Madeira in February told the UN there has been an upsurge in terrorism-related violence.

"The violence has mainly been perpetrated by al Shabaab, through the use of IEDs, mortar attacks, ambushes, and targeted assassinations of senior government officials, Somali security forces and civilians," he told the UN Security Council.

"Al Shabaab appears emboldened by its determination to disrupt the ongoing electoral process," he said.

Madeira gave the example of the February attack in Mogadishu in which he said a convoy of Somaliland election delegates was targeted.

This is happening amidst food insecurity and drought due to climate change, locust invasion and the insecurity situation.

Somalia already has a weak security apparatus and Amisom is ending its mandate on March 31, and will be succeeded by African Union Transition Mission.

In neighbouring Ethiopia, the situation following the Tigray war is still dire.

Only this week, a video of uniformed men burning a civilian alive in western Ethiopia sparked widespread outrage, further demonstrating the level of human rights abuses in the country.

The Ethiopian Human Rights Commission identified the perpetrators as government security forces and pledged to punish them.

On March 2, an armed group attacked a civilian convoy and its military escort in Benishangul-Gumuz and killed 53 people.

In a recent report, the commission said at least 750 civilians have been killed or executed in Ethiopia's Afar and Amhara regions since July. The regions are part of a larger conflict that broke out in the northern Tigray region in November 2020.

In terms of democracy, Ethiopia was to hold its election in June 2021 amidst the war and the humanitarian crisis.

The election was delayed for two years due to Covid-19 and upon request of the National Election Board of Ethiopia due to preparedness.

However, the election was not held on the same date for all the regions. It was postponed in 63 constituencies in Harar and Somali regions to September 6, 2021, due to irregularities and security issues.

It was the same case in some areas in Amhara, Oromia and Benishangul Gumuz regions.

Wangeci Chege, who teaches at USIU, said the war in  Tigray, the displacement and the humanitarian crisis, boycott of the elections, backlash from development partners - the EU refused to send an observer mission - were challenge that overshadowed the polls.

The conflict between the federal government and TPLF continues, even as Prime Minister Abiy Ahmed appears to have eased on his hardline position against negotiating with what he calls a “criminal clique”.

In February, he told parliament that even though no talks had started, it doesn’t mean the door is closed.

“Negotiations, dialogue doesn’t mean the problem has been solved, it means seeing whether there’s an alternative route to [get] rid of a problem."

The meeting, however, heard that Eritrea was unhappy with Abiy stopping war with TPLF and choosing to negotiate.

The war has claimed thousands of lives and the country’s infrastructure, especially in Tigray region.

Freedoms have also been curtailed, with the banning of international media, targeting of journalists, activists and social media.

The panel warned that assault on free media by governments in Somalia and Ethiopia has resulted in limited information and controlled narratives.

Chege opines that non-state actors have a huge role to play in civic education, creating awareness in democratic processes in Ethiopia and Somalia.

"Security or lack of it is likely to be a hindrance to the success of elections in Somalia as was the case in Ethiopia. Elections should be held according to constitutional provisions," Chege said.

She added that completing the electoral process will avoid prolonged political instability and increased risk of instability.

Wangeci also raised concern over the inclusion of women in the Somalia election, saying only 22 per cent of the seat were reserved for women, compared to the pledged 30 per cent.

Kenya is becoming a big brother in the region, with President Uhuru Kenyatta seeking to end his tenure as a statesman by brokering a deal between Addis Ababa and Mekelle.

There have been informal talks in Nairobi, which are believed to have been facilitated by President Kenyatta.

Somalia has experienced a series of catastrophic droughts in the last decade.
News
2 months ago

Humanitarian crisis has increased as hunger exacerbates the situation.
News
3 months ago

Sudan, South Sudan, Ethiopia and Somalia are having political and security problems, which have destabilised the Horn of Africa
Siasa
3 months ago

Ethiopia civil war: Doctors among those begging for food in Tigray

2.2 million people "are suffering an extreme lack of food".
News
3 months ago
WATCH: The latest news from across Africa
by ELIUD KIBII Subeditor and writer
Siasa
19 March 2022 - 04:00