• A close ally of Somali president Farmaajo, Abdi Ali Rage, who is also his adviser on elections since mid-2020, was  also reportedly in the meeting. 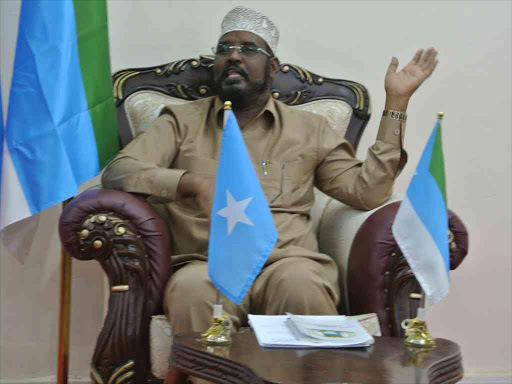 Controversy is emerging ahead of Somalia’s delayed February 25 elections.

Even after Somali leaders last month agreed to hold the election by the February 25 deadline, claims that Jubaland opposition leaders are planning to recruit and arm militia against president Ahmed Madobe  risk derailing the process.

A source who did not want to be named said that on January 30, a group of opposition leaders led by former Somalia Transport minister Mohamed  Abdullahi Salat met in a Nairobi hotel where they mooted a plan to destabilize Jubaland.

“In a leaked voice that went viral in the social media, the Minister was heard saying they have to use all possible ways to oust President Ahmed Madobe out of Jubbaland using an armed militia,” the source said.

Abdi Ali Rage, a close ally of President Mohamed  Farmaajo, who is also his adviser on elections since mid-2020, was  also reportedly in the meeting.

''We need to hasten our plans to ensure Ahmed Madobe is out of power by all means,'' Rage says in the leaked clip.

Salat also confirmed the meeting in an interview on SSTV.

Madobe, a close ally to the Kenyan government, is against Farmajo’s re-election.

Farmaajo’s four-year mandate expired in February last year, but was controversially extended by the Lower House in April, triggering a standoff and protests  on the streets of Mogadishu.

In July last year, Madobe’s administration refused to allow in Rage in to Jubaland. A plane carrying Rage was rejected permission to land at Kismayo Airport.

At the time, Lower Juba police commissioner Isack Mohamud Dogor accused Rage of attempting to incite violence in the state.

"In recent days, the security forces have been following the activities of groups led by Abdi Ali Rage inside Kismayo. These cells were trying to smuggle illegal weapons into the city to create insecurity,” Dogor said.

Rage is said to have parliamentary ambitions in Jubaland and was on a mission to seek endorsement for Farmajo from a section of clan elders.

In the Somalia electoral process, state legislatures and clan delegates will pick lawmakers for the national parliament, who in turn will elect the president. In the indirect electoral system,each of the 275 Lower House MPs should be elected by 101 delegates picked by clan leaders.

Rage’s case came just a few months after after Jubaland, alongside Puntland, declined to attend talks with President Farmaajo.

This further contributed to the strained ties with Kenya, which backed Madobe. Somalia accused Nairobi of meddling in its domestic politics.

Those tensions escalated in March, when heavy fighting broke out near the Kenya-Somalia border between Somali troops and Jubaland forces. Kenya accused Somalia of violating its territorial integrity.

There was also another attempt by the federal government soon after his reelection to undercut him.

He, however, signed a deal with his rivals which was brokered by the Kenyan government and facilitated by Puntland President Said Abdullahi Deni.

The Jubaland Council for Change said they recognise Madobe’s election.

They also said they would form a ‘quality coalition government’ to administer the Somali federal state in the interest of the people.

The international community, which has heavily invested in the political process, has voiced its alarm over the election crisis, sustaining pressure for the stakeholders to meet the February 25 deadline.

The US, EU, UN, AU and Igad fear for the stability of the country as it continues to battle a deadly armed uprising by the al-Shabab armed group.

On January 25, in what UN Somalia described as part of his regular engagement with political leaders in the country, Special Representative James Swan met former President Sharif Sheikh  to discuss “strengthening the integrity of electoral processes, and the roles of independent observers and the international community.

Jubaland was also among states  and the the National Salvation Forum that rejected Farmajoo’s attempted term extension last year.

"The Forum, in consultation with various sections of the Somali society, will take necessary steps against unconstitutional term extension and take measures to find a solution for the transitional period," the Forum which brings together 15 presidential aspirants and leaders of Jubbaland and Puntland states said in a joint statement.

The outcome is a huge blow to President Mohamed Farmaajo's re-election in 2020.
Siasa
2 years ago
by ELIUD KIBII Subeditor and writer
Siasa
04 February 2022 - 22:00