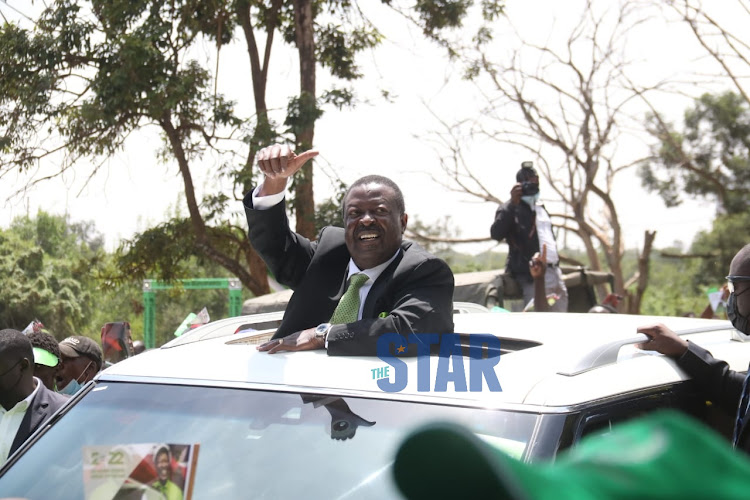 The former vice president, who has been in the political cold since 2013 when he ran unsuccessfully for President, faces a do-or-die moment in the August 9 general election.

After causing a political earthquake and making an unexpected move to partner with Ruto, Mudavadi faces the daunting task of avoiding self-destruction.

Analysts say his dramatic move to join forces with the Deputy President puts him in an awkward situation to shore up his own influence.

There are fears he might have made a disastrous political miscalculation that might consume his prospects and send him hurtling down the hierarchy.

"Musalia's move is a big miscalculation, he will rue his decision," political analyst Alex Kasanga said.

"His best shot would have been working with Raila."

However, the other side of the coin, which few acknowledge, is that Mudavadi is finance expert and a measured and rational politician. He has been talking about debt and economic problems for a long time.

He previously served as Finance minister in Kanu and is praised for lifting the country from economic ravages of the dying years of President Daniel Moi's regime.

If Ruto wins the presidency, Mudavadi is tipped to be made Chief Minister and minister for Finance, giving him an overall mandate to oversee government ministries and salvage the economy.

Currently, Interior CS Fred Matiang'i is the supervisor of government ministries as chairman of the National Development Implementation and Communication Committee.

"If Ruto wins, Musalia would be the most happy politician, a genius of sorts, especially given that he is being bashed for jumping away from the winning team," said former Governor Mohamed Mohamud.

If reviving the economy would be his job, plus a chunk of government, that's much better and substantive than being deputy president.

An announcement about what exactly what Mudavadi will do will be made soon, as speculation and criticisms are rife.

The popular wisdom is that  with the DP likely to name his running mate from Mt Kenya, a vote-rich region seen as one of his strongholds, Mudavadi's influence will be whittled down.

There are indications the ANC leader might be named the head of the DP’s presidential campaign, alongside Turkana Governor Josephat Nanok as part of the plan to elevate his place.

But some observers argue Mudavadi's move to join Ruto would destroy his political prospects as President Uhuru Kenyatta is determined to shape his succession race.

Uhuru has not hidden his preference for ODM boss Raila Odinga to succeed him when he retires in August, complicating a Ruto-Mudavadi game plan in the battle for the top job.

Savula, who defected from ANC two weeks ago, and joined the Democratic Alliance of Kenya as the deputy party leader said Mudavadi's star has been dramatically dimmed if not extinguished.

“I differed with Musalia several times because he had harboured some serious bitterness towards Raila, yet it was clear that he would inherit Raila’s support, if he had worked with him,” he said.

He went on, “It is game over for Musalia because Ruto is headed straight to the opposition and Raila is going to form the government.”

It is still unclear if Mudavadi and Ford Kenya party boss Moses Wetang'ula can manage to galvanise Western Kenya behind Ruto, given the region has traditionally backed Raila.

For instance, in the 2007 and 2017 polls, Western Kenya voted for Raila almost to a man/woman, including in 2013 when Mudavadi ran for President.

Signalling what analysts have termed his dissolved stranglehold, Mudavadi's camp is facing a political haemorrhage as MPs initially in ANC party defect to Raila’s camp.

At least seven legislators have deserted him with more defections said to be in the offing as protests gather storm over his move to work with Ruto.

The defections have been seen as an affirmation of Raila’s massive influence in Mudavadi's Western turf, leaving him a commander without soldiers to propel his ambitions.

“The ANC leader has made a serious political miscalculation that will consume his political career,” analyst Felix Odhiambo who teaches at Kisii University said.

He went on, “Musalia’s political fortunes were only viable if he remained in Oka and partnered with Raila. As it is, he is headed to political oblivion.”

The details of Mudavadi's deal with Ruto are not clear yet but there are reports he could forgo his presidential ambitions to support Ruto with the promise of getting 30 per cent of government if Ruto wins.

On Thursday, Kanduyi MP Wafula Wamunyinyi, the leader of the DAP-K, warned that Mudavadi's goose was cooked the moment he agreed to work with the DP.

“It is rather obvious that Raila is so popular in Western Kenya, including in Mudavadi's Vihiga county. Mudavadi would have resuscitated his career if he stayed behind Raila,” he told the Star.

The MP said the presidential contest is favouring Raila, with the numbers showing he will form the next government.

But Wetang’ula, who is also working with UDA-ANC arrangement, maintains that as leaders from Western Kenya, they shall lead the community into the next government.

Should Ruto lose the presidential race, it would mean Mudavadi would stay in the political cold for more than 15 years, a long period for a politician seeking a national profile.

A loss would also evoke memories of what has been termed as his biggest political blunder when he stuck with President Daniel Moi in 2002 as others bolted from Kanu.

Moi would later pick him as vice president in the dying months of his administration. He became Uhuru’s running mate in the subsequent general election that analysts say sent him to the political cold.

The Moi rebels then led by Raila, Wiper boss Kalonzo Musyoka and George Saitoti teamed up to build a massive political machine, the National Rainbow Coalition, that swept Kanu out of power.

Because of his association with Moi, Mudavdilost his Sabatia parliamentary seat but declined Kanu’s nomination, choosing instead to bounce back in the 2007 polls through Raila’s ODM party.

“The Western bloc is thoroughly split, I hope Musalia is still soul searching to see if he made the right decision or not,”Bett said.

The former Buret MP insisted, however, that although Mudavadi has joined the Ruto team, the determinant will be how Mt Kenya will vote.

“It is not Western Kenya but Mt Kenya. Whoever clinches the Mt Kenya vote will be the next president,” he said.

The country is expected to be bombarded with high-octane politics in the coming months as bigwigs escalate their State House battle in a Raila-Ruto two-horse race.

President Kenyatta is backing the Azimio La Umoja Movement, which is set to be unveiled as the ex-PM's election vehicle.

They are liars , thieves - Mudavadi.
Elections 2022
3 months ago

He is the only presidential candidate who assures stability with solid intellectual credentials.
News
4 months ago

Musalia to Uhuru: Don't force me to hate Ruto