Why Ruto risks losing the Coast in 2022 despite inroads

UDA is a closed shop. Anyone perceived to be opposed to the party leadership is a persona non grata to Ruto and UDA

• The Ruto team at the Coast needs serious reform: It has to be transparent and inclusive. 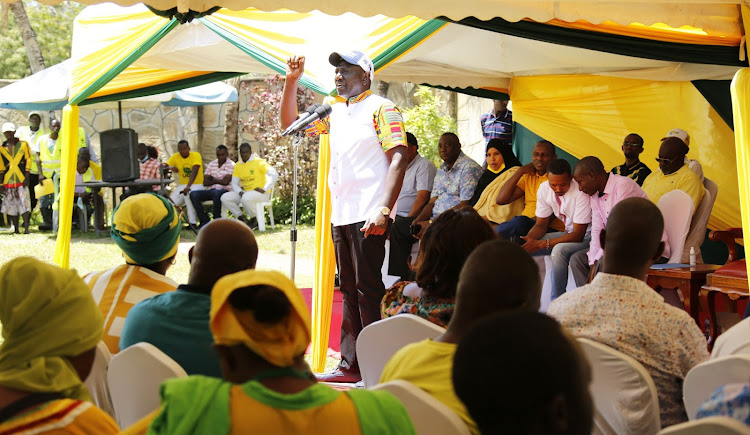 Deputy President William Ruto this week concluded a four-day campaign tour of the Coast region in a series of meetings to sell his 2022 presidential bid and the ‘hustler’ narrative.

The overall objective of these meetings, however, is to try to dislodge ODM leader Raila Odinga’s decades-long political grip of the Coast region.

This time round, however, Ruto’s meetings were not without drama. There were protests and grumbles over the behaviour of UDA’s local leadership, claims of unfair party nominations, and crowds milled aimlessly around meeting venues demanding campaign money.

In the midst of all the chaos, the ‘hustler’ narrative was lost in some instances.

But it is the behaviour of UDA leadership at the Coast that captured the moment. Local leaders are accused of ‘monopolising’ Ruto. The claim is that people who are not closer to him are intruders. And even as Ruto wound up his campaign tour, blemishes over UDA leaders at the Coast, persisted.

This is not idle talk.

The Ruto team at the Coast needs serious reform: It has to be transparent and inclusive.

As it is now, UDA is a closed shop. Anyone perceived to be opposed to the party leadership — or challenging its action — is a persona non grata to Ruto and UDA.

It should be noted that UDA team is majorly composed of disgruntled ODM loyalists, who won their seats through the Orange party machine.

If these individuals had campaigned on their own, some of them would never have been elected. Ruto’s absolute trust in this clique, at the exclusion of others, could be politically unwise.

Further, the monopolisation of Ruto politics at the Coast has alienated people who would otherwise be ready and willing to push the ‘hustler’ agenda.

The conspicuous absence of governors, opinion leaders, political influencers, professionals, women and the youth groups at Ruto’s public rallies is quite telling. It expounds the story of exclusion obtaining in UDA.

Despite these drawbacks, there are steps Ruto could take to win the Coast in 2022. First, the region is fatigued with Raila and ODM after decades of unfulfilled promises. Second, as 2022 approaches, the Coast does not have a substantive leader or party to fill the existing vacuum.

Mombasa Governor Hassan Joho and his Kilifi counterpart Amason Kingi, who initially showed enthusiasm to lead the region, have finally hanged up their gloves.

Efforts by Kingi to form a regional party have fallen asunder. The Pamoja African Alliance party he is fronting has been rejected by the people on suspicion he wants to use it as a pathway to make himself politically relevant beyond 2022.

All these factors could work to Ruto’s advantage if he possessed the far-sightedness of a giraffe. Raila and ODM have deep political roots in the Coast and it shall not be easy to uproot them.

Nevertheless, there are some steps Ruto could take to challenge ODM’s dominance and dislodge Raila from the region.

One, UDA at the Coast should be seen to be the party of the people, not an elitist club of political friends — a dictatorship of Ruto’s chosen few.

Two, UDA must desist from the politics of money bags. Scenes of crowds yelling for dollops outside of meeting venues only serve to discredit the party and its leaders.

Three, the DP should not play lone-ranger politics. UDA leadership must be diverse and representative of inclusive costal interests.

Yes, the Coast is fatigued with Raila and ODM politics and yes, the Coast needs real political change and a substantive leader. But if Ruto and the UDA leadership play politics as usual, they will lose the region in 2022.

Ruto to sign pact with coastal region ahead of 2022 election

Says it will empower farmers and SMEs who are currently suffering in the hands of shylocks and predatory lenders
Counties
1 month ago
by KAZUNGU KATANA
Siasa
23 October 2021 - 10:16