Why Mudavadi must ignore the naysayers and be his own man

In our tribal and divisive politics, Mudavadi offers an opportunity to break the Big Families' chokehold on power.

• Mudavadi is the de facto opposition leader, one who has stood by his principles,

• He is non-polarising with an imposing level of education and professional experience as economist, legislator, CS, Vice President, DPM. 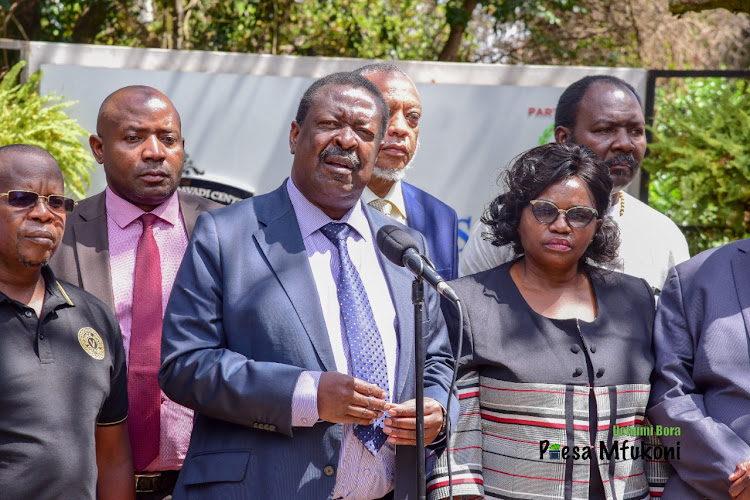 President Uhuru Kenyatta's exit looms large and politicians are realigning themselves  for the 2022 general election. Deputy President William Ruto is leaving nothing to chance. He has hit the campaign trail ostensibly on development tours.

He has been to every corner of the country but made more trips to Western Kenya, Mudavadi’s stronghold. Political pundits suppose it is because of the Mudavadi factor. The majority of Kenyans approve of Musalia's brand of politics that is gentle and non-polarising.

With an unassuming amiable mien, Mudavadi, stands out as a leader with ability to bring together diverse characters and build a team to achieve clearly set leadership objectives.

Mudabadi is ahead of the pack due to his level of education and professional experience as an economist, legislator, Cabinet minister, Vice President and Deputy Prime Minister. He was charged with formulating frameworks for the implementation of devolved governance.

He could offer this country the much-needed sober leadership to steer it into a better and fulfilling future. Musalia’s reserved mien and uncanny sober caution portray him and the ANC party as the boost to national cohesion. This contrasts with DP Ruto or Raila Odinga's candidacy that elicit mixed reactions, strong passions and divided opinions, with a serious task of political balancing.

With clearly established party structures, Mudavadi's Amani National Congress has a pivotal platform to impress voters. His competitors know this and always tease him into dropping his presidential bid.

President Mwai Kibaki was equally gentle but decisive in his candidature. Most Kenyans consider Kibaki to be Kenya’s best president historically. Mudavadi can emulate Kibaki and keep his eye on the prize in  2022.

Just like Kibaki, who did not give way to red-hot Raila in 2002, Musalia must reject calls by those urging him to support ‘others’ in the presidential race. Mudavadi’s presidency promises a paradigm shift from a polarised course to a cohesive and optimistic nation that offers equal opportunity for all.

In our tribally charged and divisive politics, Mudavadi offers this country an opportunity to break the Big Families' chokehold on power.

The opposition politicians rushed to join the government, but the leader of ANC, Musalia Mudavadi, had to choose a different path. Mudavadi has chosen to remain the opposition pillar, rejecting any co-operation agreements, a decision that has surprised both friend and foe.

It had been assumed that recent increased engagements between him and President Uhuru Kenyatta were indications of a budding co-operation. However, refusing to join Jubilee, he has profiled himself as unique principled player in the political mosaic.

He now stands in a moment in history, and he has given himself a great advantage for redefining and recasting himself, if only he will conquer it. His new positioning gives him the freedom to criticise government, unencumbered by political ties.

The new Jubilee partners like ODM for now must entirely support its initiatives and refrain from criticising its failures.

Mudavadi can recast himself as the force playing oversight to government.

The challenge for Mudavadi is that people will compare him to Raila, who has kept this fire burning for almost two decades. This is also the opportunity for him to break from the influence of being a Luhya leader, to build a national constituency.

As the de facto leader of the opposition, Musalia has opened himself a platform with infinite possibilities for building a credible national political profile. It yields him leeway to navigate 2022 with a free hand and his competitors will be stymied by association with Jubilee’s perceived defects amongst the electorate.

Further, each of the opposition leaders coalescing around Uhuru sees themselves as the first among equals when it comes to being flag-bearer of whatever electoral vehicle will emerge from the current tapestry being woven by the President. Each hopes for a 'Tosha' moment from Uhuru that favours them.

The battle for the flag-bearer will intensify as 2022 nears, and as previous elections have proved, it will be replete with casualties and major fallouts.

If Mudavadi decides to stick it out alone till the end, he’ll have a clear pathway, unencumbered by the kind of distracting battles that saw him shoved to the periphery, and the rug pulled from under his feet in Nasa in 2017.

He will also be in a prime position to welcome, on his own terms, those political players who will have no roof to accommodate them in 2022.

All this presupposes that the former Deputy Premier is ready to roll up his sleeves and do the dirty work necessary to build a national constituency.

He only needs to look at the enormous energy and work rate of Raila and Ruto, to see what it means to mobilise, maintain, and sustain a national electoral movement. I hope he has the gumption.

Only by shedding his clothes and diving headlong into ice-cold waters will Mudavadi convince Kenyans that he has the gravitas to grab the Kenyan political tiger by the tail.

Hence, let Mudavadi offer himself for the presidency and leave it to Kenyans to decide.

Oscar Okwaro Plato is a political scientist. The views are his own

He said Kenyans are struggling to make ends meet.
Counties
3 months ago

Musalia says he will not play second fiddle to any presidential hopeful.
News
3 months ago

His strategy is to whip western allegiance, Luhya's to fully rally behind him.
News
3 months ago
by OSCAR PLATO
Siasa
23 October 2021 - 10:14